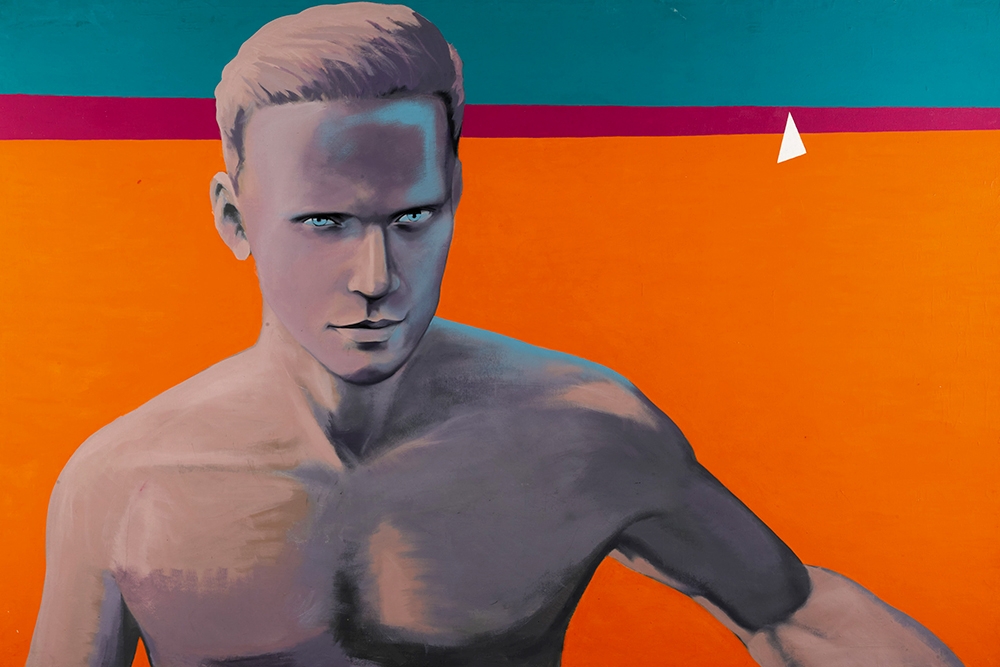 In the early 1990s, with the collapse of the Soviet Union, art fell by the wayside in both the Caucasus and Central Asia. But now the art market in those regions is showing signs of life.

International collectors’ growing interest in Eurasian artworks was evident in early June during the Contemporary East sale, a Sotheby’s London auction of 125 pieces by established and emerging artists from Central and Eastern Europe and the former Soviet Union. Most of the artists whose works went on the bloc had rarely, if ever, appeared in auctions outside their native countries.

Painted in 1993 as Georgia struggled with a separatist war, economic depression, rampant power shortages and corruption, the medieval-miniature-style work depicts a 1795 battle between Georgians and Persian invaders. It is meant to express the desire to fend off instability in search of a better future.

At £62,500 ($83,000), its price was double its estimate and over eight times the amount one private collector told EurasiaNet.org he had paid for four of Abramishvili’s paintings in 2001.

The buyer was identified only as “a private Russian collector.” Joanna Vickery, director of Sotheby’s Russian art department, which organized the auction, sees such purchases as part of a trend.

The region still has not come into its own, underscored by the fact that Sotheby’s inaccurately catalogues all Eurasian art as “Important Russian Art.”

Experts maintain that with increased international focus on the Caucasus and Central Asia, and greater local capacity for exhibits, now is the time for Eurasian artists to define themselves. That process has already begun. In 2008, Georgian curator Magda Guruli and artist Iliko Zautashvili launched Artisterium, an annual, two-week international contemporary art festival in the Georgian capital, Tbilisi. A year earlier, in Central Asia, art curators Larissa Pletnikova and Guldana Safarova mobilized the culture ministries of five republics for MUSEUMstan, an interdisciplinary exhibition project.

Experimentation is gaining steam. In the Caucasus, Azerbaijani artists like Faig Ahmed and Farid Rasulov are creating works that deconstruct the country’s traditional carpets, reviving them with optical or interior-design illusions.

“Conceptual art is still embryonic, moving at a slow pace, but with interesting attempts to define a space which is specifically Azerbaijani,” explained Chingiz Babayev, a pioneer of Azerbaijani conceptual art, active since the late 1980s.

How far any Caucasian or Central Asian talent can go in shaping a new trend, or in challenging the establishment, remains open to question. The region’s political trend toward authoritarianism tends to work against artistic creativity. In Azerbaijan, for example, the Yarat Contemporary Art Centre and the Heydar Aliyev Foundation nurture national talents, yet, as institutions funded by the extended ruling family, they are unlikely to fund artists who want to explore sensitive social or political issues.

Yet even where censorship is not much of a problem – in Georgia, generally seen as the most liberal of the South Caucasus’ three countries and with a strong modern-art tradition – artists do not always seem inclined to push limits.

“Contemporary art is a deeply democratic form of expression and it is blossoming in Georgia, but I think artists are not bold enough, despite a conducive environment for self-expression,” said Nini Palavandishvili, an art curator at GeoAir, a foundation that manages international cultural projects and runs a residence program.

A lack of collaboration among Georgia’s three artistic educational institutions – the Tbilisi Art Academy, Free University and the Centre of Contemporary Art – and a lack of in-depth research can make for superficial art works, she added.

Georgia’s southern neighbor, Armenia, also has a robust modern art tradition. In 1972, the Soviet Union’s first modern-art museum opened in the Armenian capital, Yerevan. Seen at the time as a major innovation, it still functions today.

Some Armenian artists have a record of challenging the establishment – for instance, Manan Torosian’s controversial Soft Toy, featuring two knitted vaginas to represent the female world dissolving into the trap of capitalism and fashion.

For such artists, large-scale international events, such as the Venice Biennale, provide a key outlet.

In 2015, Armenia, the first former Soviet republic to participate in the Biennale, won the event’s top prize, a Golden Lion, for the best national pavilion. Since 2005, artists from Central Asia have joined forces for a combined pavilion, earning art-world accolades.

But with funding hard to find back home, many artists opt to work abroad. GeoAir’s founder, visual artist Sophia Tatabadze, maintains strong ties with Tbilisi, but considers Berlin to be her base. Other Georgian names on the international scene – contemporary and conceptual artists Thea Djordjadze, Lado Darakhvelidze, and Andro Wekua, to name but three – work mostly in the United States or Europe.

As yet, domestic demand for new works is not strong. “Their work is remarkable, but more conceptual, and is not the result of a development process in the local market,” noted Baia Tsikoridze, an art collector and founder of Baia Gallery, one of the oldest in Tbilisi.

While they may operate or study outside Eurasia, stressed curator Palavandishvili, “these artists look at their native land and reflect the socio-economic challenges in their artwork.”