Controversy Erupts Over Death Of Georgian Soldier In Ukraine 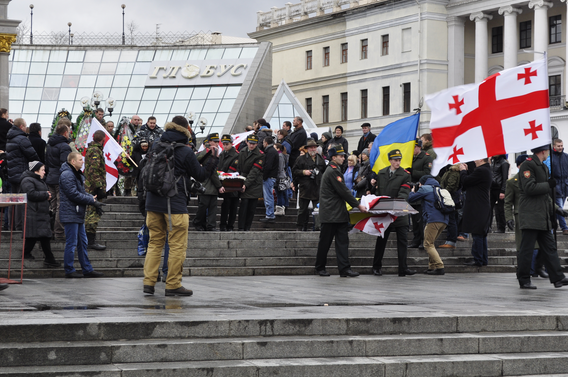 The killing of a Georgian soldier in eastern Ukraine has become the source of a political dispute in Tbilisi after the Ministry of Defense issued a statement blaming the former government for the death.

The Georgian, Aleksandre Grigolashvili, died in combat in Lugansk, Ukraine, on December 19. He had joined the Georgian armed forces in 2007 and fought in Afghanistan and South Ossetia, family members said, but left service in 2008. He went to Ukraine two months ago to fight on the side of the pro-Kiev forces.

The issue of Georgians fighting in Ukraine has been a controversial one. Earlier this month former president Mikheil Saakashvili, who has emerged as one of the top supporters of the government in Kiev, said that Georgian soldiers were leaving the Georgian army to go fight in Ukraine. The assertion was strongly disputed by the current ruling Georgian Dream coalition.

"Our officers won’t stop protecting the security of the homeland and society [in return] for receiving foreign citizenship. They are protecting and will continue to protect Georgia,” the Ministry of Defense said in a statement. “If [Saakashvili] wants to contribute to Ukraine’s combat actions he can go and serve there. He is an irresponsible man and his statement is irresponsible,” added Irakli Sesiashvili, head of the defense and security committee in parliament.

Grigolashvili had left the Georgian military, and it's not clear what his citizenship status was. But Georgians have interpreted his participation in the war in Ukraine very differently. On December 20, a ceremony was held in central Kiev to commemorate Grigolashvili, attented by Saakashvili, vice-speaker of the Georgian Parliament Giorgi Baramidze (a member of Saakashvili's United National Movement), and Georgia’s ambassador to Ukraine Mikheil Ukleba.

The body was then flown to Tbilisi, where it was greeted by a government delegation led by Deputy Foreign Minister Vladimer Gurgenidze. "The whole government, people are in solidarity with this family and our presence at the airport is the expression of it. We want to show support to Grigolashvili’s family,” Gurgenidze said.

But the controversy began when the Ministry of Defense issued a statement -- quickly removed from the website -- blaming the former government:

We want to stress that full responsibility for the death of Alexandre Grigolashvili lies with representatives of previous authorities, who are calling on the Georgian citizens to take part in military operations outside of our country. The Ministry of Defense has noted for more than once that such calls are irresponsible and aim at misleading active and former servicemen of the Georgian armed forces.

UNM officials, as well as several Georgian Dream officials, quickly criticized the statement. “I am ashamed that Georgia has such a defense minister, or to be more precise – we now know for sure that we do not have our country’s defense minister as he expresses interests of other country”, referring to Russia, said UNM official Giga Bokeria, reported Civil.ge.

I did not like that statement either and I think that the Ministry of Defense should not have made statement of political content. I spoke to the Minister and he too regrets very much...

I want to ask everyone not to dramatize it. Anyone can make a mistake and no one is ensured from making a mistake. Mistake has to be acknowledged and apologized for. I think that the Minister will do it.

Obviously, the judgment on whether a soldier should go and fight in a foreign army depends entirely on the fight is perceived as a good one: the government is obviously treating the case of Omar al-Shishani, the Georgian-born leader of ISIS who served in Georgia's armed forces until 2010, very differently. The question here is whether it is worth supporting the beleaguered Ukrainian government, and/or striking a blow against Russia. The political consensus in Georgia, as the MoD has discovered, is that it is.