The government has been facing calls, including from its American and European allies, to ensure that the former president is being adequately treated. But it accuses Saakashvili of faking his condition. 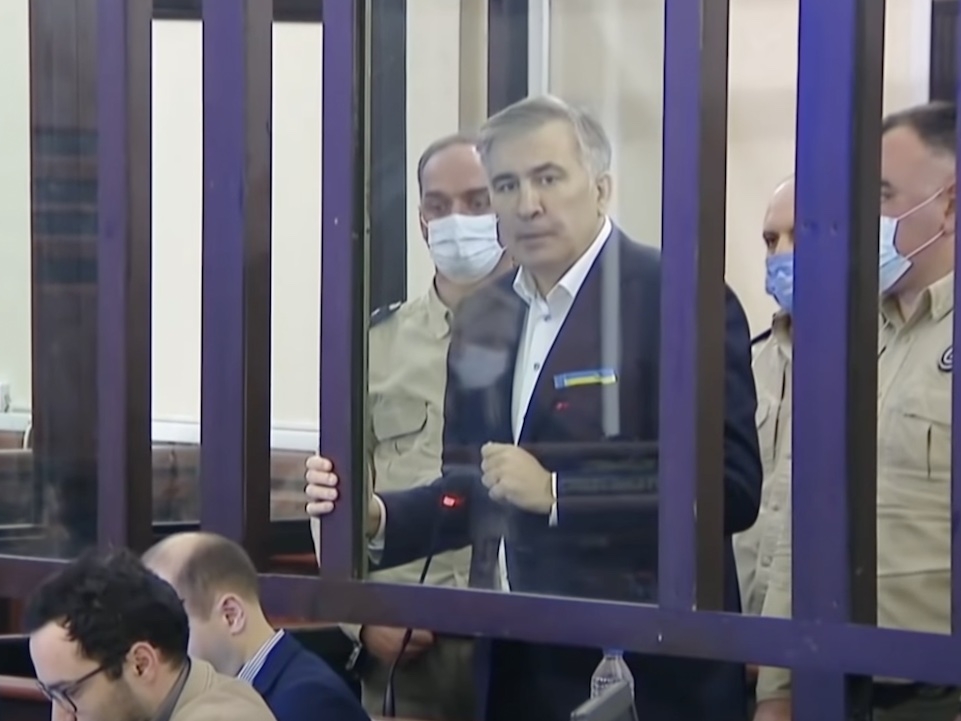 The Georgian government released controversial footage of jailed former president Mikheil Saakashvili in the hospital, as pressure continues to mount on the authorities to allow his treatment abroad.

By all accounts Saakashvili’s health has in recent weeks significantly deteriorated, resulting in calls to suspend his prison sentence so that he can get better medical care outside Georgia. The government, meanwhile, has accused Saakashvili of faking the severity of his illness and, on the evening of December 14, released video footage of the patient in an attempt to support their claims.

“This footage clearly shows that Mikheil Saakashvili is dissembling in order to obstruct the enforcement of justice and mislead the public and international partners,” the Special Penitentiary Service, an agency under the Justice Ministry, said upon releasing the footage.

Explaining its release of the footage by citing “high public interest,” the agency further claimed that the images showed Saakashvili’s “offensive and aggressive behavior” toward hospital personnel.

But the release quickly drew a heavy backlash, with critics charging that the government had breached the patient’s right to privacy while only confirming the severity of his condition.

“The footage, or personal data, was made public without the consent of the inmate,” Saakashvili’s lawyer, Shalva Khachapuridze, said after the release of the footage. “This is a criminal offense.” He further alleged that the video was edited misleadingly.

The Personal Data Protection Service, a body authorized to oversee breaches of privacy, said on December 15 that it was studying the matter. The Public Defender’s Office also released a statement criticizing the release of the footage and noting that it does not contain “any clear evidence of the simulation on part of the patient.”

“The current condition of [Saakashvili], as stated already, does not rule out possible aggressive behavior,” the statement said.

The release of the footage came at the end of what was already an eventful day: In the morning, the penitentiary service denied Saakashvili the possibility to remotely attend his court hearing from his hospital room, citing a lack of suitable technical equipment.

The hearing concerned a motion to suspend the former president’s sentence due to his poor health: Georgian laws allow deferring prison sentences in cases of “serious illnesses” until “their recovery or a substantial improvement of their health.” Such a ruling has to be made by a court.

Hospital doctors have been advising against transferring Saakashvili to a courtroom, citing his worsening health. However, not many found the arguments for denying him a virtual appearance credible.

“We sincerely hope that in the 21st century, [Saakashvili] will be allowed to stand trial from the predetermined location,” Pawel Herczynski, European Union Ambassador to Georgia, told reporters on December 15. “It is difficult to understand why there was no opportunity for him to appear before the court.”

Saakashvili briefly went on a hunger strike to protest the denial of his remote court appearance, but soon reversed his decision, citing calls from members of the European Parliament to quit the strike.

On December 8, the Georgian Public Defender’s Office announced that it is submitting an amicus curiae brief to the court recommending the suspension of the sentence due to the severity of the ex-president’s condition.

That followed an examination of Saakashvili by a medical group working for the public defender, which issued its report on December 6.

“The patient’s condition has been worsening over the past year and, in particular, over the past two months,” the group said in its report. “The current treatment has not brought results. The patient is not being treated proactively and the treatment approaches are limited to responding to various complications.”

According to the report, Saakashvili suffers from heavy muscle loss, with his weight falling from 115 kilograms last October to 104 kilograms in May and then to 74 kilograms in December.

Other complications include energy loss, cognitive impairment, reduced sensation in limbs, movement dysfunction, fever, muscle atrophy, and muscle weakness. Saakashvili was diagnosed with cachexia, a syndrome associated with muscle loss, with further diagnoses of post-traumatic stress disorder, polyneuropathy, anorexia, advanced anemia, and orthostatic hypotension - a form of low blood pressure that can lead to dizziness, lightheadedness, and fainting when standing up.

In a press briefing on December 6, doctors from the group told reporters that “all available” treatment has already been provided in Georgia, and if nothing changes, the patient will have “two to three months” before the damage becomes irreversible.

“We are dealing with a syndrome that we could not diagnose [in Georgia],” one of the doctors said.

The limits of healthcare available in Georgia led many to advocate for Saakashvili’s transfer abroad for treatment, a call also repeatedly voiced by the EU parliament.

The parliament called on the government “to release former President Mikheil Saakashvili and allow him to receive proper medical treatment abroad [...] on humanitarian grounds and as a means of reducing political polarisation,” the body said in a December 14 resolution.

The Justice Ministry has so far denied the request, arguing that Saakashvili should not be treated any differently from any other prisoner.

Saakashvili was jailed by Georgian authorities immediately after his return to the country last September following years of exile in Ukraine. He had been sentenced in absentia to six years in prison on two abuse of power charges and is pending trial on two others. He was also charged with illegal border crossing after his return.

His health began to deteriorate after going on a 50-day hunger strike on the day of his arrest. He was admitted to Vivamedi hospital on May 12 after another setback.

The Georgian government has been facing growing scrutiny over Saakashvili’s condition, repeatedly defending itself from accusations of providing improper medical care. His condition has drawn much international attention, including from the EU and the U.S. State Department.

The EU “follows attentively latest worrying reports about the deteriorating health of Mikheil Saakashvili,” EU spokesperson Peter Stano tweeted on December 8. “Georgian authorities are responsible for his health & well-being and have a duty to take all necessary measures for him to receive appropriate medical care.”

In a December 12 statement to Voice of America, the State Department said it would “continue to advocate with relevant persons to take necessary steps for Saakashvili’s health and wellbeing based on the recommendations of the medical experts of the Public Defender.”

The next hearing on suspending Saakashvili’s sentence has been scheduled for December 22. The process is expected to take several hearings and dozens of witness testimonies before a final decision is made.