The terminal state of the economy remains paramount in the minds of those wishing to leave. 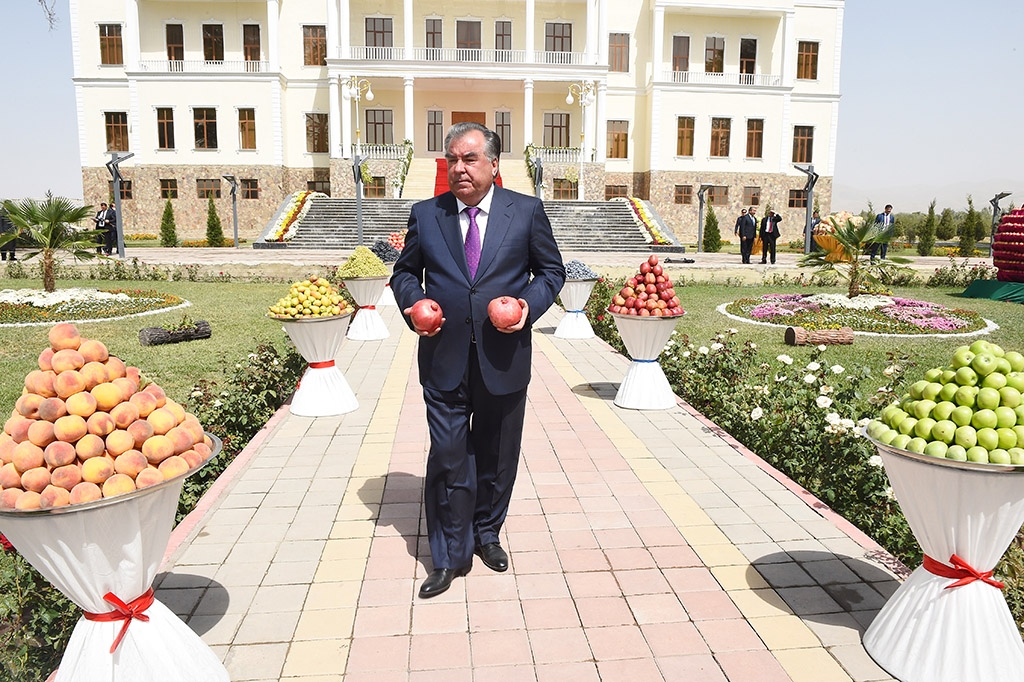 Land of plenty – for him (government handout photo)

People in Tajikistan are routinely informed by state media that they are living in a garden of plenty, heaven on earth.

Just to drive the point home as literally as possible, President Emomali Rahmon is frequently pictured standing next to piles of fruit and vegetables, or maybe standing in a field.

All the same, the large number of people applying for U.S. visas through the green card lottery, Russian citizenship or, in more extreme cases, trying to obtain political asylum in Europe shows no sign of abating.

The window for applying for the green card lottery this year ran from October 7 to November 10.

This has proven quite a money-spinner for people familiar with the system and who are, as a result, able to help others file the paperwork. At the Dushanbe Mall shopping center alone, there are four stands offering this service. The steady trickle of customers attests to the popularity of this option. Others advertise their green card consultancies on social media.

“I’ve lived my life, but what’s left for my children to do in Tajikistan? There [in the United States], they would have a chance to get an education – even working in a gas station would make them a better living,” Zarafo, a 45-year-old waiting in line at one green card stand in Dushanbe Mall, told Eurasianet. She declined to provide her surname.

Applying to try and get the visa is free of charge, but people believe a well-compiled application stands a better chance of success. The cost of getting somebody to fill out a green card application is about 100 somoni, a little less than $10.

According to the most recent statistics available from the U.S. Department of Homeland Security, over the past 16 years, about 7,300 people born in Tajikistan have received green cards.

Russia represents a more traditional and easier way out. And this is not just about the manual laborers who migrate for months or even years at a time to earn the meager incomes that they send to families back home.

People with advanced educations are well-positioned to find permanent jobs as part of Moscow’s resettlement programs. Applicants must speak Russian, be qualified in a profession and undergo an interview process. A streamlined citizenship procedure is in place for doctors and teachers.

What is especially appealing about this option is that under a dual citizenship agreement between Tajikistan and Russia, obtaining a new citizenship does not automatically entail losing the old one.

This has had predictably alarming consequences inside Tajikistan.

“In Soviet times, our parents sent us to the nearest school to our home, or to the district polyclinic. Now, because of the lack of qualified teachers, I have changed my children’s school twice already. As for doctors, I find them through the recommendations of parents on social media,” Gulbahor Aminova, a 45-year-old Dushanbe resident, told Eurasianet.

During the drives of registration for resettlement in Russia, hundreds of people will line up outside the premises of the Russian Interior Ministry's representative office in Dushanbe. The jostling can be so intense that scuffles will sometimes break out.

A more drawn-out citizenship procedure that is also popular is to just live, work and pay taxes in Russia for a period of at least five years.

The trend is unmistakable.

According to figures from Russia’s Interior Ministry, more than 35,700 nationals of Tajikistan received citizenship in 2018. In 2019, it was 44,700. In the first half of this year, around 31,300 Tajiks obtained Russian citizenship.

There is no available data on how many have opted to retain both citizenships, but anecdotal evidence suggests this is a preference.

The distinction between those with and without Russian citizenship is that the latter can live relatively stress-free in Russia indefinitely, without having to grapple with bureaucracy, as labor migrants must do.

“Firstly, an additional passport can’t hurt. And secondly, if you move [within Russia], you will have fewer problems with housing, work, and so on. Also, you can save a lot on paying for [work permits], insurance and other payments that are obligatory for migrants,” said Akmal Khabibov, a 32-year-old from Dushanbe who is now seeking to relocate to Russia.

And then there is another contingent of Tajiks who are leaving the country on political grounds – or at least what they describe as such.

This emigration began in 2015, which marked the start to a major wave of arrests of opposition politicians and activists following the banning of the Islamic Renaissance Party of Tajikistan, or IRPT, and the Group-24 movement. About 30 journalists have also applied for refugee status in Western countries.

According to data from the United Nations High Commissioner for Refugees, more than 14,000 Tajik citizens applied for political asylum in various countries, mainly in Europe, from 2015 to 2019. Of that total, 6,773 successfully received refugee status.

The coronavirus crisis has served as yet another spur for people to leave. One Dushanbe resident, Subhia, told Eurasianet that she was prompted to pack her bags by what she perceives as the government’s indifference to the outbreak.

“I studied in London, but returned to Tajikistan to work for the good of the country, although I could, like other compatriots, have stayed there. But during COVID, the behavior of the authorities just killed all my feelings; human life is worth nothing in this country,” Subhia said.

Subhia referred to how medics in high-risk zones were forced to work with the sick without protective equipment, and how those same doctors and nurses were not even provided food and medicine when they fell sick.

Health Ministry figures and assertions on the current situation with the COVID-19 outbreak have long ceased to be credible and useful, leaving the rumor mill and activists to pick up the slack in assessing the scale of the damage. It is believed many dozens of doctors have succumbed to the virus, but such claims are impossible to verify.

The terminal state of the economy remains paramount in the minds of those wishing to leave.

“Since 2009, the authorities of Tajikistan have been constantly talking about the global economic crisis, although there was no such crisis until 2019. The wellbeing of the population of Tajikistan is not growing, and in recent years, the quality of education and medicine has declined,” said a Tajik living in Europe who wished to remain anonymous.

A more subtle motivation is to flee the suffocating control of both the authoritarian state and conservative families.

“The personal life of citizens is controlled by their families, neighbors, local authorities,” said the expatriate in Europe. “There is no opportunity for political self-expression or activism either. Everything is prohibited. That is why people are trying to break out of this vicious circle in such a radical way. It seems to me that the trend will only increase in coming years.”