The government is betraying signs of not knowing quite how to run a state of emergency – especially one instated to defend a population against an invisible virus. 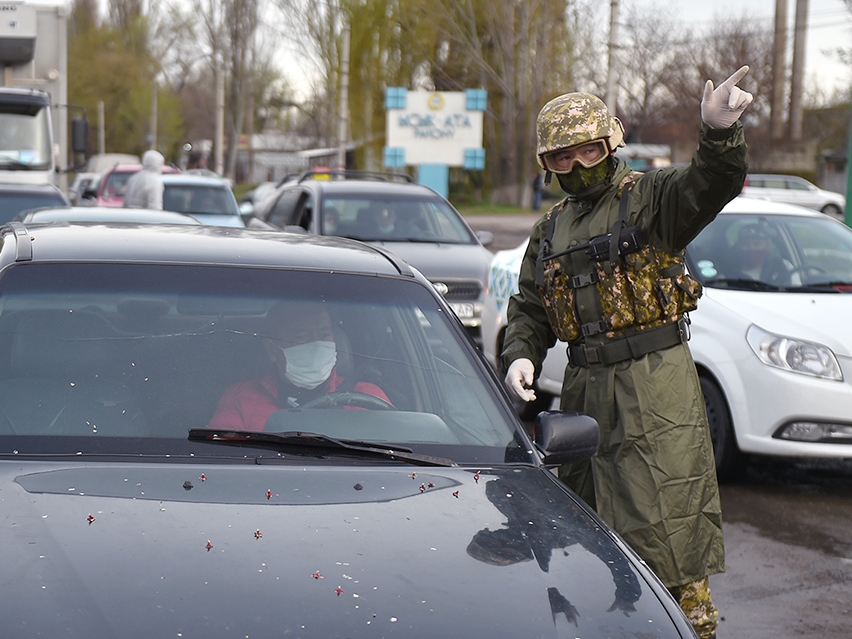 A checkpoint in Bishkek (gov.kg)

“If you don’t have your ID with you, they’ll throw you into prison,” one elderly gentleman warned as he strolled toward me from a checkpoint in downtown Bishkek.

Ever since officials declared the coronavirus state of emergency here in Kyrgyzstan, soldiers and police have been patrolling the streets. People on the streets must present them their papers and a self-declaration form showing where they have come from and where they are headed, and why.

“Good day! I am Inspector Daniyarova,” one of them, a 30-something, said to me as she asked for my ID. She copied out the details into a notebook and, after the check, added: “We would ask that you not leave home unless necessary.”

Behind me in line was a young woman who had obviously just been to a party, although all bars, clubs and restaurants should by rights be closed because of the state of emergency. She wore a black dress, a fur coat, makeup and a tired expression. The woman said she lived nearby and had just gone out for groceries and forgotten to bring along her ID.

Daniyarova instructed one of the soldiers to take the woman to her apartment and check her documents there. As they began to make their way, the woman tried to sweettalk the solder into letting her go, but he, in violation of health preservation protocols, grabbed her by the arm to make sure she didn’t make a run for it.

Seeing this, another woman in line said, appalled: “Until this I had felt physically unwell from self-isolation in my apartment. Now I’ve come out onto the street, I feel mentally unwell.”

The government is betraying signs of not knowing quite how to run a state of emergency – especially not one instated to defend a population against an invisible virus.

The checkpoints are sporadically positioned and are not up to fully controlling people’s movements. Then again, they are sufficiently restrictive to cause headaches for businesses.

Earlier this week, workers from an important flour milling plant were unable to get to work because they had not been issued the special passes needed to get through the checkpoints. The company, Akun, had been working day and night to ensure Kyrgyzstan does not go short of food at a time when countries are carefully and jealously weighing up whether they should be allowing their own reserves to be exported.

The way Akun works in normal times is that it sells the wheat bran left over from the grain it mills to farmers as livestock feed. To avoid storage space being taken up, this material must be collected regularly. But the farmers are struggling to get through checkpoints too. And now there is little space for the sacks of flour.

“If the government does not fix this problem urgently, the farmers are going to be in big trouble, and that is going to push up the cost of meat,” the company said in a statement.

On the same day that Akun issued its plaintive complaint, the government pledged that anybody supplying the capital with essential goods would have their problems addressed. Sure enough, trucks carrying groceries to stores have been exempted from the requirement to display a pass.

The thinking about logistical problems has been, to put it mildly, half-cocked.

On March 22, the authorities halted public transportation and banned taxis. That forced doctors and nurses to look for rides or walk to work.

For some, a crisis is but an opportunity in disguise. Pharmacies are perennially out of disinfectant gels, masks and medical gloves. Small sewing factories in Bishkek that were until recently turning out clothes have turned their hand to making disposable masks and hospital gowns. Even a modest workshop can turn out 15,000 masks a day. They sell at a 15 soms ($ 0.18) apiece, about three or four times their normal price.

It isn’t just businesses that can profit from a state of emergency. The State Committee for National Security, the latter-day reincarnation of the KGB, on April 1 said it had detained several policemen who were selling the sought-after checkpoint passes at $200 a pop. One cop was reportedly said to be ferrying sex workers, although it is unclear if that story was true.

And what is Kyrgyzstan without spontaneous rabbles of grouching malcontents? Despite the ban on assembling in large groups, 150 or so residents of Issyk-Kul, a village in the eponymous Issyk-Kul region, came out onto the streets on March 31 to complain about how people suspected of having been in contact with coronavirus carriers are being placed under precautionary medical observation in a nearby summer camp. The crowd cooled down after receiving reassurances from local officials.

Those confined to their homes are tormented variously by – in the best-case scenario – boredom or – in the worst – hunger.

The first group are the lucky ones. To while away the hours, some are investing in gadgetry. My online advertisement for the used tablet I wanted to sell had languished for five months. Now I am getting multiple calls daily from interested buyers.

In the end, I sold it to a man who said his school-age children were spending their days watching cartoons and squabbling over who got to use the electronic devices. And so, he had to get the smallest child his own tablet.

Zhazgul Zuridinova, head of the sales department at a large online retailer, said sales of electronics, everything from laptops and tablets to webcams and PlayStation consoles, have gone through the roof.

Life is a much grimmer affair for those who lived hand-to-mouth off their daily earnings. Their chief worry is not keeping their children entertained, but fed. Kaktus news website says it has been inundated with heart-breaking messages of despair.

“I live in a rented apartment with a daughter and a two-year-old granddaughter,” one unnamed woman wrote. “We have nothing with which to pay the rent this month. There is nothing to eat. I worked as a cleaner and as a painter on a construction site. Now everything has been shut down. There is no work. We just don’t know what to do. It is frightening when a small child asks for food, but you have nothing to give them.”

It used to be that people could rely on money arriving from relatives working in Russia. But after the price of oil sank like a stone, the ruble took a big hit. And Russia too is now shutting down its economy as a preventative measure against coronavirus. Expatriate laborers are struggling to feed themselves, let alone their families. Hundreds are stranded at Russian airports, waiting for charter flights to carry them home.

The sister of a friend can no longer pay for rent in Moscow and wants to return to Kyrgyzstan, but no flights are expected in the near future.

And there is mounting frustration that a perceived overly rigorous enforcement of quarantine rules is only going to make things harder. One acquaintance who lives in a village wrote to tell me about how the police are prowling after six in the evening to make sure nobody is out and about.

“We need people in the melon fields, but they are fining anybody who takes workers out into the fields. The hope is that this will only be until April 15. But if it is any longer, we don’t know what is going to happen,” she wrote.

The needy are getting some succor from a number of places. The government is dipping into its reserves. People who grew mysteriously wealthy while serving in government posts have distributed foodstuffs and medical masks. Public-spirited volunteers have created the People’s HQ to raise funds and organize essential services, like delivering groceries to the vulnerable.

This is only the second week of a state of emergency that is scheduled to last until at least April 15, unless that date is rolled over.

Even with all this going on, there are still some engaging in old-fashioned political scheming. Kyrgyzstan has local and parliamentary elections slated for the fall.

Kurmankul Zulushev, a lawmaker, received intense criticism for seizing the moment by proposing to hold a referendum on October 4, alongside the parliamentary vote, to ask the electorate if they wanted to live under a presidential or parliamentary system. The former choice would ostensibly assure greater powers to the incumbent head of state, Sooronbai Jeenbekov, although he is hardly in need of more authority as it is.

The indignation poured out on social media, as ever.

“Just as the whole world and all governments are waging a war on a pandemic, our guys could not give a damn about the pandemic. They would rather organize a referendum while the whole country dies of this virus,” Damira Eshmatova wrote in a typical Facebook comment under a news story about the proposal.

Another lawmaker, Altynbek Sulaimanov, raised a more urgent and possibly unanswerable question during a special session of parliament.

“If this quarantine lasts for more than a month, neither the population nor the country will survive. We just don’t have the means. The government will not be able to feed everyone. We took everybody’s job away. Sure, people may hold out for a month. They have neighbors, they have relatives. But then what?” he said.