An initial, promising breakthrough was quickly spoiled by a dispute over an impolitic dedication on some Chinese aid to Armenia. 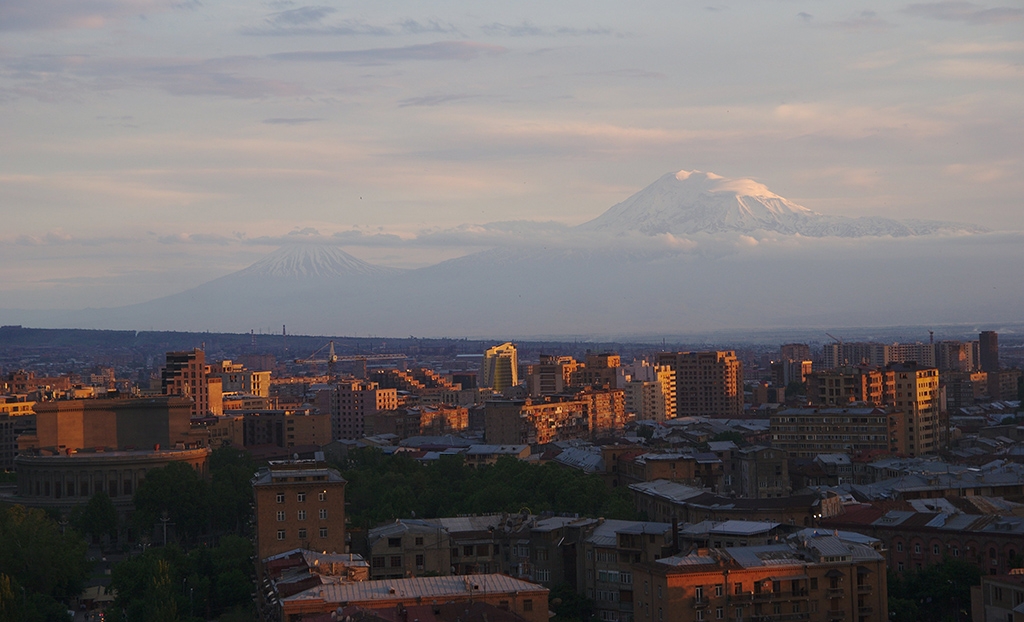 A view of Yerevan, Armenia with Mount Ararat (in Turkey) in the distance. (Photo by Ogannes/CC BY-SA 2.0)

The coronavirus outbreak helped Armenia and Turkey build a small amount of good will, and then quickly became instead the source of further mutual recriminations between the two.

The initial goodwill was created by a joint effort to repatriate Armenians who had been living in Turkey who wanted to return back to Armenia in spite of closed borders. Turkey is home to tens of thousands of Armenian citizens, mostly labor migrants, and some of them sought to return home as the COVID-19 outbreak rapidly began to spread.

Turkish President Recep Tayyip Erdoğan held a friendly phone call with the patriarch of the Armenian church in Istanbul to help work out the plan and by April 9, 73 Armenian citizens were able to make the trip, by bus via Georgia. “The transfer is agreed with the relevant services of Turkey and Georgia, and their support is commendable,” said Anna Naghdalyan, a spokeswoman for the Armenian Foreign Ministry.

It was a minor bit of cooperation, but remarkable nevertheless given the difficult history between the two sides.

The two states have not had diplomatic relations since 1993, when Turkey cut ties following Armenia’s seizure of the Azerbaijani territory of Kelbajar during the war between those two countries. Relations have festered further as a result of Turkey’s continuing refusal to formally acknowledge the 1915 genocide of ethnic Armenians in the Ottoman Empire.

“This gesture [of repatriation] was symbolically significant and offered a degree of fresh optimism over an opportunity for diplomatic re-engagement in this time of crisis,” Richard Giragosian, the head of the Yerevan-based think tank Regional Studies Center and a longtime observer of Armenia-Turkey relations, told Eurasianet.

Soon enough, however, other coronavirus-related events intervened to erase what good will the repatriation effort created.

China sent a shipment of aid to Armenia, including thousands of medical masks and gloves. The boxes of the supplies were marked by a dedication, in English, reading: “May our friendship be higher than mountain Ararat and longer than the Yangtze river.”

Mt Ararat is a national symbol of Armenia, but it is located within the current borders of Turkey. One of the sensitivities of genocide recognition in Turkey is the fear that Armenia might use recognition to claim territory in eastern Turkey from which the Armenians were expelled, and the Chinese inscription fed into that concern.

After reports emerged about the Chinese aid to Armenia, Turkey’s Foreign Ministry demanded an explanation from the Chinese embassy in Ankara.

“The Ambassador of the PRC [People’s Republic of China] informed [us] that the aid they sent to Armenia was prepared by a local government and delivered to Yerevan by a private company,” the Turkish MFA reported on April 12. “He explained that the statements on the packages were written only in Chinese language by the local government and there was no mention of Mount Ararat and it was understood that the English translation referring to Mount Ararat had been added later. Ambassador of the PRC stated that the case is currently being investigated, and Turkey would be informed of the outcome of the investigation; adding that the PRC respects the sovereignty and territorial integrity of Turkey.”

Meanwhile, on the same day, an Erdoğan spokesman, İbrahim Kalın, told CNNTürk that Yerevan had requested aid from Ankara. “There was a demand for medicine from Armenia. Our president has approved this demand and our Health Ministry is running the process,” Kalın said.

The statement further hit back at the Turkish complaints about Ararat.

“Unfortunately, some statements made by the Turkish side in the context of fighting against COVID19 do not contribute toward creating a depoliticized and humanitarian environment of cooperation,” the statement read. “It is particularly regrettable that these statements targeted the assistance provided by the third country to Armenia by unnecessarily politicizing and showing disrespect for the friendship between the peoples and their national symbols.”

It appeared that the Turkish offer of aid to Armenia was “prematurely disclosed to the Turkish media,” Giragosian said.

“Unfortunately, this only diminishes the value of the cooperation over the coordinated return of the Armenian citizens,” he added. “And after the Armenian government had publicly praised and thanked Turkey for its assistance, this is not only a missed opportunity, but is also a case of miscommunication marked by two steps forward, one step back.”