Those who made it to Russia before the scale of the crisis became evident are now stranded. 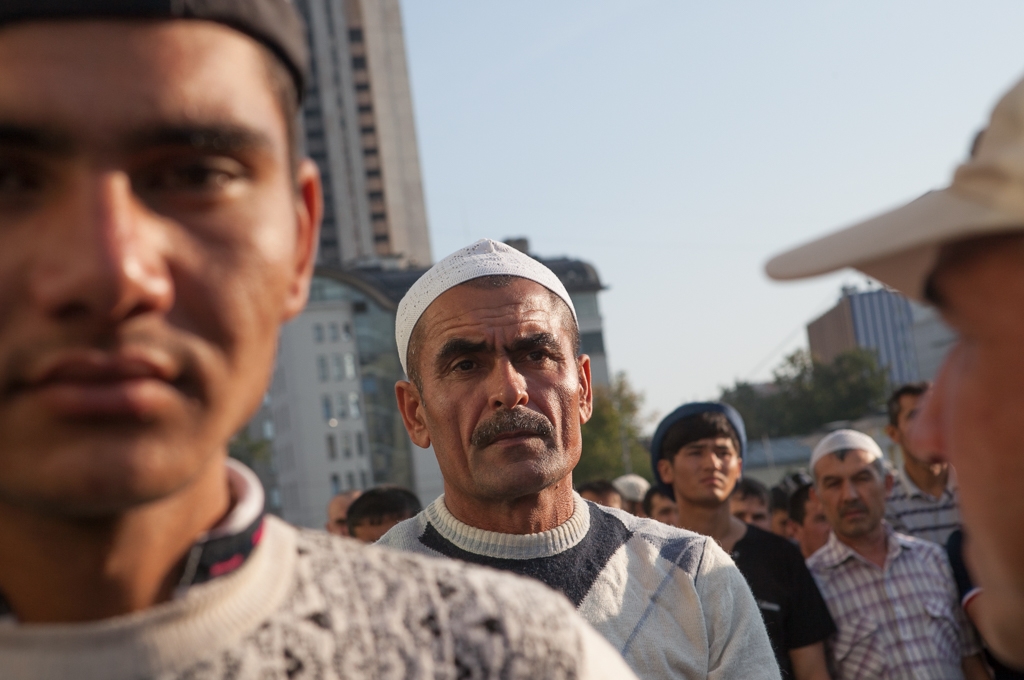 Migrant laborers in Russia live from month to month, usually without any financial reserves to cushion them in times like these. (Photo: David Trilling)

With the coronavirus crisis showing few signs of abating in Russia, Tajik migrant laborers who rely on their jobs there to feed families back home are stuck.

They are not needed in Russia, where the economy has juddered to a near-total halt. And the government in Tajikistan is making little or no effort to bring them back.

The government in Moscow did at least offer some mild reprieve over the weekend, however, when it announced that foreign nationals would not face sanctions for overstaying without authorization.

Labor migration is a seasonal business. It is in spring that hundreds of thousands of men make the trip north to take up jobs on building sites, in warehouses and industrial plants. To pay for travel, they will often sell such tradeable items as they own. Little luxuries bought in better times underwrite the cost of the trip.

Those who made it to Russia before the scale of the crisis became evident are now stranded. Bahriddin, 48, should be at work on a building site the northern city of St. Petersburg, but his employer has placed him and his colleagues on indefinite furlough without pay.

“The whole country is in quarantine. There are no salaries and we need to extend our work permits and pay for our rent. We also cannot go home,” Bahriddin told Eurasianet earlier this month.

Interviewees spoke to Eurasianet on condition that their identity be kept protected.

There is a bureaucratic hierarchy among expatriate Central Asian laborers. Kyrgyz nationals are the luckiest, because their country belongs to the Moscow-led Eurasian Economic Union trading bloc, which means they do not need work permits or visas. Tajiks, as well as Uzbeks, usually need to pay a monthly work permit fee that can range, depending on the region where they are employed, anywhere up to 5,500 rubles ($75).

Russia’s Interior Ministry told daily Moscow-based newspaper Komsomolskaya Pravda on April 3 that it estimated there were still 507,000 Tajik nationals in the country. All routes home have been closed to them. The Tajik civilian aviation body on March 19 ruled that all air traffic would be suspended immediately as a protective measure. Trains were stopped too.

Hundreds trying to leave Russia were for a while stranded in airport transit zones. Some charter flights were arranged, but the fares cost anywhere up to $440, almost twice the normal price.

Migrants were granted some much-needed relief on April 18, when Russian President Vladimir Putin signed a decree lifting the requirement for migrants to renew their work permits for the period from March 15 to June 15. Workers will also be permitted to live in Russia without extending their residency registration. Violating that rule often culminates in deportation and extended bans from re-entry.

That only fixes part of the problem. Migrant laborers in Russia live from month to month, usually without any financial reserves to cushion them in times like these. As for sending money home, that is a matter of deepening apprehension.

Bahriddin comes from a southern district of Tajikistan called Farkhor. Though many of the nation’s most powerful top officials also hail from Farkhor, the region is poverty-stricken and rife with joblessness.

“Because of the crisis, food prices have risen. I need to send money to feed the children – their stomachs don’t care whether or not there is an epidemic going on. If the epidemic doesn’t get us, then hunger will,” Bahriddin told Eurasianet.

As of April 20, there were no confirmed cases of COVID-19 in Tajikistan, although many are suspicious that the authorities are either hiding the truth or are simply unable to verify either way.

The generosity of some businesspeople has provided crumbs of reliefs. When migrants were marooned in airports, one Moscow restaurant owner, Alexei Khodorkovsky, delivered packed meals.

Russia-based Tajik businessman Mehriddin Idiyev has sheltered dozens of his countrymen in his own home. Farukh, another Tajik laborer stranded in Russia, was one of those taken in.

“In Moscow, it is not easy for migrants to find housing, but now we don’t even have money to pay for it. Fortunately, Mehriddin helped us. He provided us with both housing and food,” said Farukh, who had spent 12 fruitless days in March at Moscow’s Zhukovsky Airport trying to leave the country.

Idiyev, who owns a construction business, has also allowed Tajik expatriates struggling to find places to live to take up residence on his idle building sites.

Tajikistan’s ambassador in Moscow, Imomuddin Sattorov, has pleaded with heads of companies in Russia to at least refrain from laying off Tajik workers altogether.

“It just would not be humane if they just close everything and throw all Central Asian nationals onto the street,” Sattorov told RIA-Novosti news agency. “Many companies will be left without workers. The economy must, after all, develop.”

Karimjon Yorov, a Tajik rights activist based in Russia, said that the lockdowns in place in Russia are pushing many to seek illegal work. Such labor is doubly unlawful, since those people would be working without authorization and violating lockdown rules.

“If the lockdown does not end, then the migrants may be able to hold out, but probably not for more than two months.” Yorov said. “Migrants are in the main going to work in the fields. The only thing that can save them now is farming work.”

What this all portends for Tajikistan’s economy is hard to assess. Remittances generate the equivalent of about one-third of gross domestic product, fueling consumption and keeping many families out of poverty. According to Russia’s Central Bank, Tajik nationals sent home around $2.6 billion in 2019.

Bloomberg news agency last week cited Unistream, a money transfer company, as saying that payments from Russia to recipients overseas – and many of those will have included Tajiks – dropped by 30 percent in March compared to the same month in 2019.

And sources at Zolotaya Korona, the money-wiring company most favored by Tajiks, have told Izvestia newspaper that they expect transfers in April to fall by 50 percent. It was unclear from that report, however, to which exact period that comparative figure alluded.

Valentina Chupik, executive director of the Moscow-based Tong Jahoni rights group, predicts a grim outlook if things do not take a turn for the better.

“Migrants face impoverishment. People will stop paying for work permits and they will agree to do any work for food. Casual laborer bazaars will appear, and that is tantamount to slavery,” she said.