The church’s obstinacy in not giving up the practice of sharing spoons for communion – a clear public health threat – is causing an unprecedented debate over the church’s role in society. 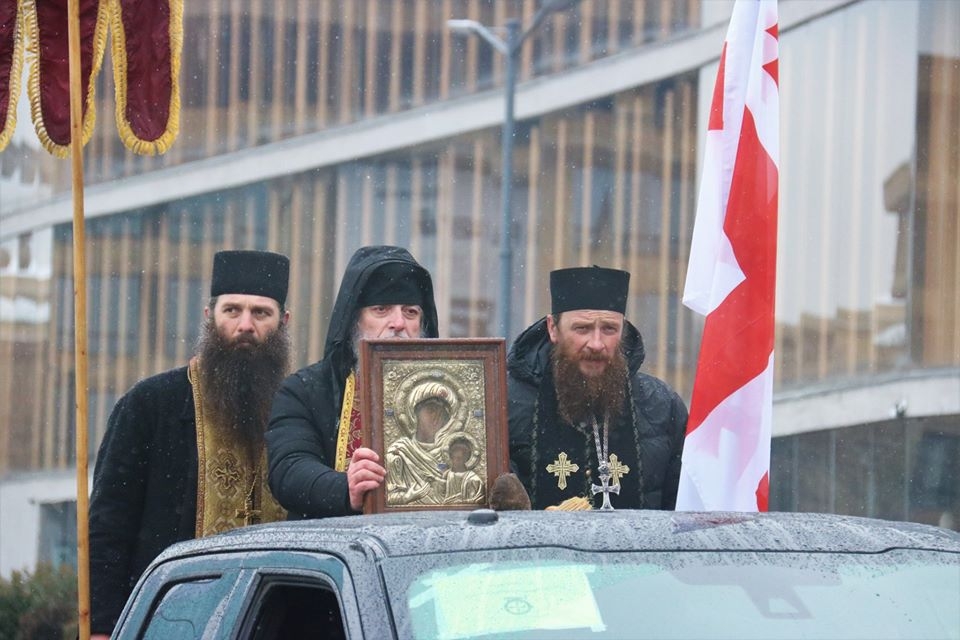 Georgian priests drive around Tbilisi on March 17 in an effort to protect the city against the coronavirus outbreak. (photo: Facebook, Georgian Patriarchate)

Georgia has imposed a ban on gatherings of more than 10 people, in what many have interpreted as an end run around a church that is refusing to properly protect its services against the spread of the novel coronavirus, setting off an unprecedented rebellion against its previously sacrosanct church.

The state of emergency was declared on a Saturday, March 21, in what appeared to be a move to minimize the number of people gathering at church services the next day.

At particular issue is the use of shared spoons to distribute wine among worshippers during the rite of Holy Communion. Georgia remains one of the last Eastern Orthodox countries to leave this part of the observance unchanged. Church officials insist that sacramental wine and bread, being holy, cannot transmit diseases.

Hierarchs across the Eastern Orthodox world initially resisted the recommendation to switch to single-use spoons, but began adapting as the pandemic spread. Russia, the world’s largest Orthodox congregation, last week ordered that the spoons be sanitized before reuse while Greece, the spiritual polestar of Orthodoxy, suspended most church services indefinitely. In Georgia, though, the church is holding firm.

The church’s obduracy has touched off unprecedentedly broad and bitter criticism in Georgia, where the ancient church is widely seen as a fundamental part of the national identity and where the veteran pontiff, Patriarch Ilia II, strikes a divine figure.

While liberals in Georgia have long resented the conservative church’s influence over the state and society, the new controversy has taken the conflict to a new level. Debates raging in the news and social media are ending friendships, straining ties among family members and causing a rift even among priests.

In one typical exchange, a Tbilisi-based teacher wrote on Facebook: “Leave the church alone! It has guided us through centuries of invasions, plague and war. Place your trust in Christ and in the wisdom of our Patriarch.” Her declared intention to partake in Communion as usual prompted long and rancorous arguments with friends and relations. “A lot of elderly people, including my parents, may die because of you,” commented another woman. “I wish you the best, but I can’t be friends with a murderer.”

Within two days, almost 4,000 people signed a petition to the government to enforce pandemic-conscious religious practices and to revoke a constitutional agreement that bestows special powers and privileges on the church. Elsewhere, campaigns were launched to support the church and adherence to the traditional Christian rites.

The authorities and even some health officials urged restraint amid the growing controversy, but they stopped short of ordering the powerful church to stop using shared spoons. The authorities instead tried to reach a compromise through carefully worded public statements and behind-doors negotiations with the Patriarchate, the holy see of the Georgian Orthodox Church.

Following a much anticipated meeting of the top prelates’ council on March 20, the Patriarchate reiterated its intention to proceed using the shared spoons. “Eucharist is the essence of the Christian way of life,” the Patriarchate said in a statement. “Holy Communion brings healing to the body and soul… It is therefore unacceptable to doubt the essence of the mystery of Communion and manifest these doubts through actions that include foregoing the Communion spoon.”

The church did agree with some of the official health recommendations and urged the faithful not to crowd inside church buildings and asked the sick to stay home. The Patriarchate’s decision nevertheless sparked an outrage among many more secular Georgians.

The following day, the authorities announced the state of emergency, effective until two days after Easter, when the faithful tend to flock in greatest numbers to churches and cemeteries. Beyond already existing restrictions on travel, the declaration did not bring new, drastic restrictions like a full lockdown. The most significant new restriction was the ban on gathering of more than 10 individuals in public places, including churches.

Some clerics struck defiant notes. Bishop Iakobi of Bodbe said on March 22 that he did not intend to “let authorities control the situation” and that it was not up to the police to decide who comes to church and when. Others appeared respectful of the restriction and even offered to take it a step further. Archbishop Grigiol of Poti urged his parish to stay home or at least outside the church building. “I promise you that priests will come to your homes if you want to partake in communion,” he said.

Meanwhile, Georgia’s previously mild epidemic situation worsened somewhat on March 22, when a significant new case of the disease was detected in the southern, predominantly Azerbaijani city of Marneuli. The authorities put the wider region in a lockdown after a woman with COVID-19 was hospitalized in critical condition. The woman had many social interactions after being infected, authorities said.

The rate of confirmed cases of infection climbed to 61 and the number of quarantined people jumped to over 3,200 as of the afternoon of March 23. The deteriorating epidemiological situation only added fuel to the debate about communion, including among many believers. For many of them, the choice is between faith and fear.