Could cryptocurrency leave Abkhazia in the dark?

The de facto authorities are trying to regulate currency mining so that it doesn’t break the territory’s rickety power system this winter. 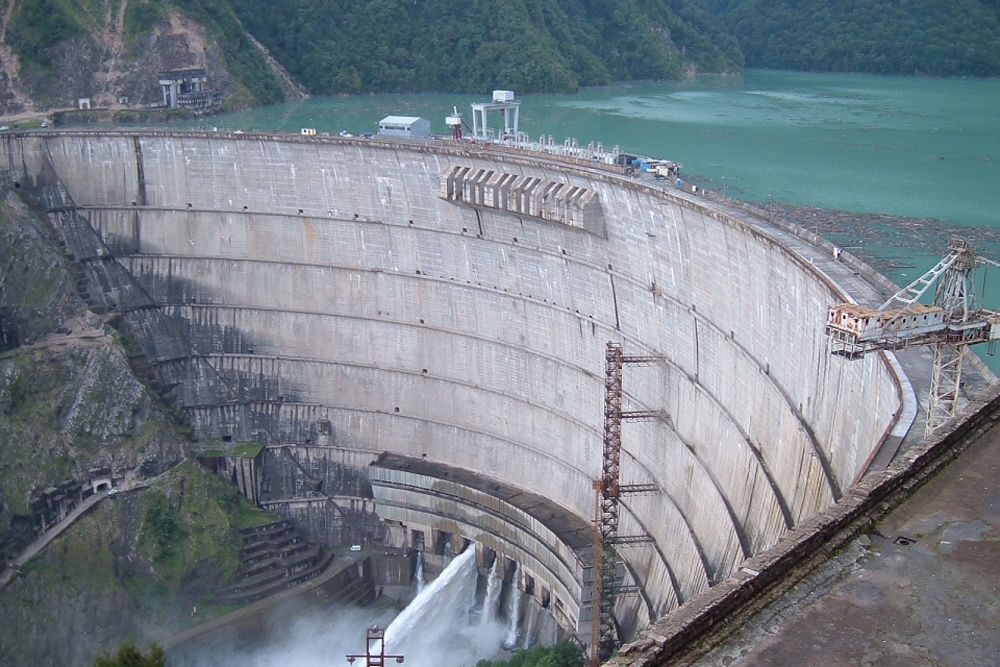 The Enguri dam complex, a massive Soviet-built hydroelectric plant on the de facto border of Georgia and Abkhazia, provides much of Abkhazia's electricity. But cryptocurrency mining is taxing the power supply and authorities are trying to rein it in. (photo: Georgia’s Ministry of Energy)

Rampant cryptocurrency mining is threatening the shaky electrical network in the tiny, mostly unrecognized republic of Abkhazia, forcing officials to call for putting regulatory shackles on the money-making scheme in order to stave off power supply interruptions this winter.

Abkhazia has recently emerged as a cryptocurrency enthusiast, much like the country from which it broke away, Georgia. Cryptocurrency-producing operations have been set up in abandoned Soviet factories left behind in the territory’s rocky period of quasi-independence.

“We have the so-called mining farms, set up on the premises of abandoned or partly abandoned factories,” said Aslan Basaria, head of the state-run energy company Chernomorenergo, as he was filling in the region’s de-facto leader Raul Khajimba on the energy situation, Ekho Kavkaza reported.

The computers that churn out cryptocurrency are guzzling up electricity. “This puts additional load on our grid, the transmission lines and substations that are loaded to capacity even without it,” Basaria said. “If temperatures fall, there is a risk that electricity will not reach regular customers.”

Cryptocurrency may be giving energy officials headaches, but some in Abkhazia see it as a solution to their many economic woes.

Civil war, a mass exodus of the pre-war population, and the consequent international isolation have turned Abkhazia into a shell of what used to be the Soviet Union’s prime fun-under-the-sun destination. Russia – accompanied by a handful of countries geopolitically indebted to Moscow – recognizes Abkhazia as a nation independent from Georgia and guards that independence with thousands of troops. To the rest of the world, Abkhazia remains a de jure part of Georgia run by an unrecognized separatist regime.

But what Abkhazia and Georgia proper both share is a fervor for cryptocurrency, as well as a large hydropower complex, which straddles the de facto boundary and provides the main fuel for cryptocurrency – electricity. The complex can’t meet either side’s need for power in the winter, when water levels in giant Jvari Reservoir are low and electricity consumption is high.

Not least thanks to low electricity costs, Georgia has become a surprise cryptocurrency powerhouse in recent years, ranking as the world’s second for cryptocurrency mining in terms of power consumed, behind only China. In Abkhazia, electricity is even cheaper. Households pay 40 kopeks (about 0.6 cents) per kilowatt-hour. On top of that, Abkhazian officials say that stealing electricity remains a major problem and that between 30 to 40 percent of customers don’t pay for power at all.

The long-troubled energy supply system is now groaning under the weight of cryptocurrency prospecting. But, on the other hand, cryptocurrency is offering the secluded region a chance to plug into an international money-making network.

Being free of state regulations, cryptocurrency is reportedly helping twilight zones like Abkhazia and the Donetsk People’s Republic, a breakaway part of Ukraine, skirt international restrictions and attract investment and trade. There is even an effort underway to digitally mint Abkhazia’s own cryptocurrency, “Abkhazia Republic Coin.”

One start-up presented the coin idea at a blockchain conference in Moscow last year. Yevgeniy Galiakhmetov, head of blockchain company BCSG, said at the conference that cryptocurrency is destined to entirely transform Abkhazia, delivering the region into the future of economic prosperity and bustling international trade, reported the news service Meduza.

“Given the limitations associated with the status of the republic, … we always seek nonconventional solutions to reach an acceptable level of [economic] development,” Abkhazia’s de-facto Economy Minister Adgur Ardzinba told Meduza.

The Abkhazian authorities, chief among them Ardzinba, appear to support the cryptocurrency plans and even sought Russian President Vladimir Putin’s imprimatur to proceed, Meduza reported.

How Abkhazia is going to reconcile its big cryptocurrency plans with the problem of electricity shortage remains unclear. As far as the energy company is concerned, regulations are needed to keep the digital money farming in check and to keep the lights on in Abkhazia.