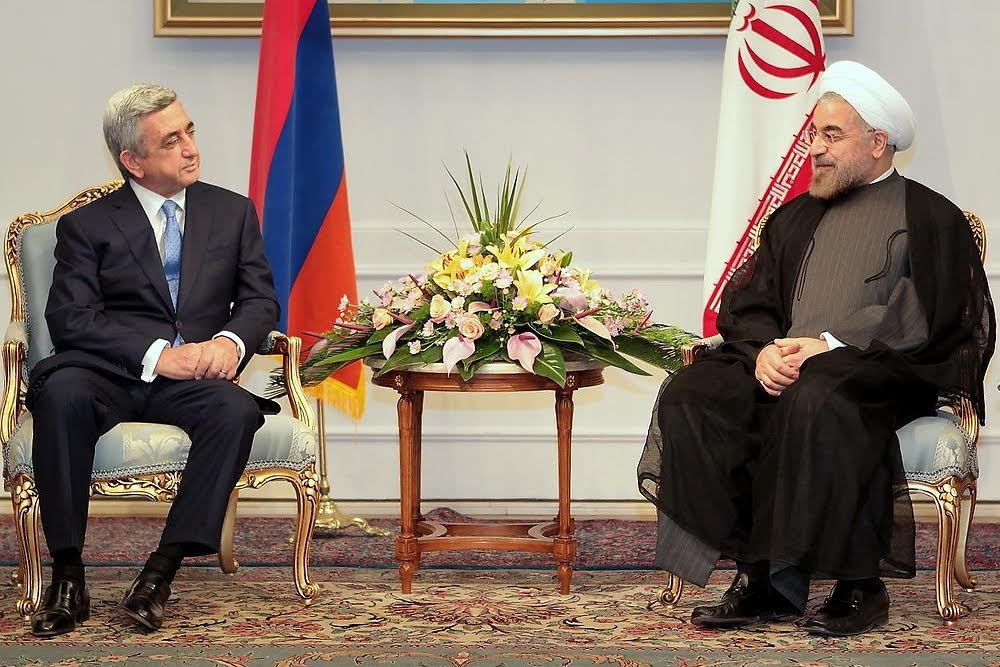 Although no exact timeline exists for the lifting of sanctions against Iran, the United Nations could consider the issue during the week of July 20, provided the International Atomic Energy Agency finds that Tehran has restricted its nuclear research as specified under the July 14 deal with the United States, United Kingdom, Russia, China, France, and Germany, news agencies report.

The prospect of lifted sanctions has investors busy making up wish lists. The sense of anticipation is especially high in Armenia, which has endured an economic blockade by its neighboring Azerbaijan and Turkey since the early 1990s. For more than 20 years, Iran has served as one of only two economic trade routes to the outside world for landlocked Armenia. A significant expansion of Armenian-Iranian trade ties could effectively break the Azeri-Turkish economic blockade.

In recent years, financing for joint Armenian-Iranian projects has run scarce. Among Yerevan’s top priorities is an estimated $3.2 billion, 470-kilometer-long railway that would run from the Iranian border into Armenia and, conceivably, onto the Black Sea ports of Armenia’s northern neighbor, Georgia.

The Armenian government for the past few years has been negotiating with potential investors, including China, which in 2014 announced a $40-billion infrastructure fund to develop links between Asia and Europe.

Yerevan hopes that infrastructure development will be a priority for the Moscow-led Eurasian Economic Union (EEU), a regional economic organization that Armenia joined in 2015. During a July 9 speech at the Shanghai Cooperation Organization summit in Ufa, Russia, Armenian President Serzh Sargsyan touted the railroad as a project that could “provide” the EEU “direct access to the Indian Ocean through the Persian Gulf.”

Some Armenian experts believe that the construction of a hydropower plant on the Arax River on the Armenian-Iranian border could rank as the most feasible post-sanctions project. As yet, Moscow has expressed no objections.

But Armenian ambitions are prioritizing the Iranian-Armenian railway. Ara Nranian, a board member of the EEU’s regulatory body, believes that Armenia “can become a transportation loop” connecting Iran and the EEU, the Tert.am website reported.

Getting the railway up and running is “strictly important” for Yerevan from a strategic and economic standpoint since it would render “pointless” the Turkish and Azerbaijani blockade of Armenia, stressed Vardan Voskanian, chair of Yerevan State University’s Iranian studies department.

The Russian-state-owned Russian Railways, though, holds a contract to manage Armenia’s railroads until 2038, and has made it clear it does not welcome competition. Prior to the announcement of the Iranian nuclear deal, Russian Railways President Vladimir Yakunin dismissed the Iran-Armenia railroad as not “productive.”

“It’s like opening a window onto the wall of a neighbor’s house,” he quipped to ArmInfo in June. A Russian Railways-proposed rail link from Russia to Iran via Azerbaijan, Armenia’s eastern neighbor, most interests the company, Yakunin told the Regnum news agency in 2014.

Asked to respond to Yakunin’s stance, Armenian Transportation and Communications Minister Gagik Beglarian maintained in late June that “Armenia’s position has not changed.”

“The railway is of vital importance and no effort should be spared to find investors and to implement the project,” Beglarian told EurasiaNet.org. Iranian officials have not yet commented.

Armenia’s trade turnover with Russia stood at $1.4 billion in 2014, while Iranian trade with Armenia was a far more modest $291 million for the same year. Overall, the Islamic Republic ranked as Armenia’s fifth largest trade partner in 2014, with Iranian exports accounting for nearly 70 percent of bilateral commerce.

Arsen Ghazarian, chair of Armenia’s Union of Manufacturers and Businesspeople, predicted that the removal of sanctions would boost trade with Iran, and encourage Iranian small businesses in Armenia.

“Certain steps have been taken, some negotiations have been initiated in this sphere,” he told EurasiaNet.org, without elaborating.

At present, about 3,000 Iranian firms, mostly small in scale, operate in Armenia. Direct investments in 2014 stood at a modest 45.6 million drams, or roughly $109,756, according to official data.

Still, Iranian entrepreneurs interviewed by EurasiaNet.org expressed optimism about the future. Saeed Sanaee, who opened a carpet and flooring business in Yerevan in 2005, now expects “easier money transfers” and the chance for “better loans from our banks to increase our business here.”

But economist Ashot Yeghiazarian, a lecturer at the Armenian State University of Economics, voiced doubts whether Armenia will be able to fully benefit from any Iranian trade opportunities. By joining the EEU, he said, Armenia “has lost the right to make independent decisions.”

Political analyst Stepan Safarian, head of the Armenian Institute of International and Security Affairs, agreed. He believes that Russia likely considers Iran as a potential threat to its interests in the South Caucasus – particularly in the energy sphere.

In June, the Armenian government sold the 40-kilometer section of a gas pipeline from Iran to the Armenian branch of Russian energy giant Gazprom, which controls Armenia’s gas supplies and distribution. Gazprom earlier had insisted that the pipeline’s diameter be reduced.

Safarian sees the sale as a warning from Russia for Armenia “not to get too carried away with cooperation prospects with Iran.”

A 2013 agreement with Gazprom forbids Armenia from purchasing gas from any other provider until 2043.