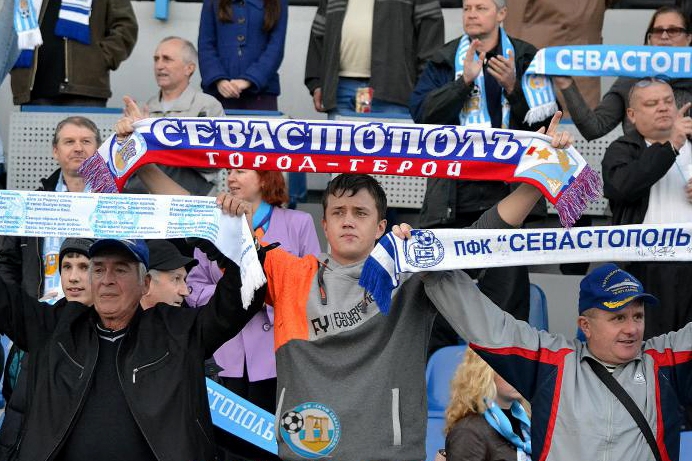 During a match in the new Crimean local football league, a fan of FC SKChF Sevastopol (СКЧФ Севастополь), formerly FC Sevastopol of the Ukrainian Premier League, holds a team scarf with the colors of the Russian flag and written in Cyrillic ‘Sevastapol – Hero City,’ which refers to the Soviet-era status bestowed upon the port city following World War II. After UEFA would not accept the Crimean teams to join the Russian football system, a separate eight-team Crimean league was established. (Photo

Russia is hoping football can become an instrument that it can use to help legitimize its annexation of Crimea.

Russian troops invaded Crimea in late February 2014 in response to the Euromaidan Revolution in Kyiv. Pro-Russian Crimean authorities signed an annexation pact with Russia on March 18, 2014, to formalize the first forceful change of a European border since the end of the Second World War. The European Union and the United States do not formally recognize Russia’s land grab, and have imposed economic sanctions on Russia to punish its aggressive actions.

But EurasiaNet.org has learned that Russia is trying to use “the beautiful game” to poke a hole in the EU’s non-recognition stance. Specifically, Russia is pressing UEFA, the European governing body for football, to recognize Crimea as an entity apart from Ukraine. UEFA is expected to make a decision on the matter in late March. If UEFA officials go along with Russia’s preference, it could establish a precedent that the Kremlin could use to steadily erode the EU’s non-recognition resolve, and drive a wedge between Europe and the United States on the issue.

A UEFA delegation, led by František Laurinec, the former president of Slovakia’s Football Association, visited Crimea in early March. The mission’s aim was to assess “the situation in reality” in Crimea, in particular how Russia’s takeover has adversely impacted football on the peninsula.

Russian and Crimean officials have tried to paint the issue as a humanitarian matter, glossing over the fact that the Kremlin’s decision to invade is the reason for the current problems. “We tried to hear proposals and ideas from people who work in Crimean football for many, many years, and who now are faced with the current political reality,” Laurinec said in an interview with EurasiaNet.org

Prior to the Russian annexation, two Crimean clubs, FC Sevastopol and SC Tavriya Simferopol, played in the Ukrainian Premier League. Shortly after the land grab, Russian football officials, without Ukraine’s permission, tried to place those two teams, along with a third Crimean club, Zhemchuzhina Yalta, in Russia’s second professional division. In an attempt to create a veneer of legitimacy for the switch, the clubs competed under changed names. But UEFA in January ruled against the move, and Russia complied by dropping the clubs from the professional ranks of the Russian football system.

“The Russian Football Association and Russian state authorities [i.e. representatives of the Ministry of Sport] accepted and respected this decision,” Laurinec said.

But Russian officials did not let the matter rest there. They came up with a plan to form a separate eight-team Crimean league, grouping the Sevastopol, Simferopol and Yalta teams with five heretofore amateur squads. If UEFA approves the plan, the league could begin to play as soon as April, with the season running through the fall.

Laurinec acknowledged that UEFA’s decision could have political implications, even as he sought to distance the football body from responsibility for any potential political fallout. Adopting an Olympic-style stance, he pleaded that sporting affairs and politics should be considered separately.

“I hope our mission will not undermine the EU’s sanctions against Russia,” he said. “We only want to prevent the death of football in this part of our Europe.”

“To be pragmatic, we have to say that Crimean clubs are not even currently an active part of Ukrainian football,” Laurinec continued. “UEFA wants to help save football in Crimea, especially youth and grassroots [development]. This is a core of our mission and we try to find solutions.”

Ukrainian authorities have not taken a strong stance on Russian efforts to establish a separate Crimean league. But, given the myriad problems facing Ukrainian authorities in Kyiv, including a Russian-sponsored separatist war in eastern Ukraine, Kyiv’s silence on the matter does not mean acquiescence.

“There is there is no official reaction at the moment,” said Denis Trubetskoy, a football analyst for the UA-football.com website. At the same time, Trubetskoy emphasized that Ukrainian authorities remain firm in their stance: Crimea remains part of Ukraine.

Trubetskoy indicated that Ukraine would not be opposed to UEFA efforts to help sustain football in Crimea on the youth level. The matter of the league is more complicated, he added. Ukraine would be steadfastly opposed to any participation by Crimean clubs in UEFA-sanctioned European tournaments. Laurinec said Crimean representation in such UEFA competitions is not currently under consideration.

Ultimately, a Crimean league would have a tough time surviving without a massive infusion of Russian funding. And with the Russian economy being battered on all sides, the necessary financial support is unlikely to be forthcoming.

In Laurinec’s estimation, only “four or five” of the eight clubs in the proposed league have the financial foundation to survive. “Also, the football infrastructure is generally very poor,” he said, adding that there also exists “a shortage of qualified coaches and a general lack of funds.”

The viability of the league may not matter that much to Russian football officials, so long as they gain UEFA recognition of the league as an entity apart from Ukraine.