Poor and rural families are not equipped to handle online school. Now they fear another academic year is going to start with schools still closed. 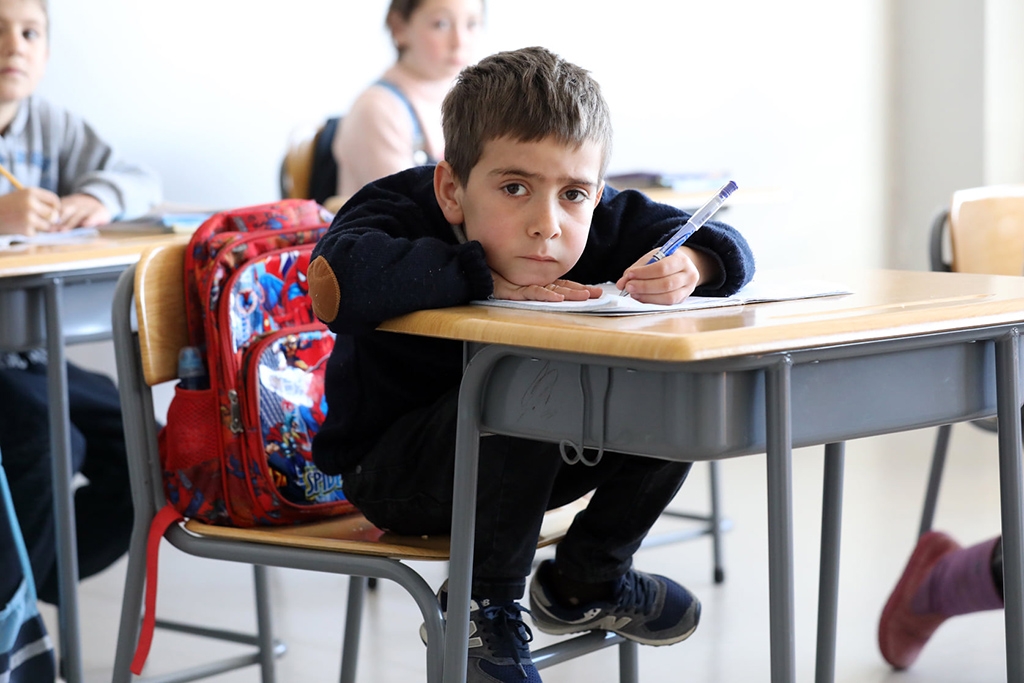 Will they return? (Education Ministry)

With three sons and one smartphone, Neli Abzandadze had to make a difficult choice every day of the last school year: Which of my kids is going to attend school today?

Schools had switched to online-only mode because of the COVID-19 pandemic, so a single Samsung phone became the only window to education for the family in Tianeti, a small town about 50 miles north of Tbilisi. The family home has no fixed internet, leaving them with only mobile access.

“Their classes overlapped, so every day I had to make a call about whose lesson was more important,” Abzandadze said. “A few times I tried to let the boys decide among themselves, but that only gave them an extra reason for a fistfight.”

Abzandadze’s husband has a phone too, but it’s a bedraggled “ancient Nokia” only good for calling and texting. Investing in another smartphone is a significant burden for the family, which lives off a small subsistence farm and government benefits. But with another school year in uncertain conditions looming, they may have no choice.

There has been no formal announcement about the upcoming school year, but Abzandadze is convinced that schools will not reopen this fall given the pandemic wave that is now raging in Georgia.

This month, daily transmission rates hit a record: 5,700 new cases a day in the country of 3.7 million. That, along with a sluggish vaccination campaign (just over 6 percent of the population is fully vaccinated) suggest that Georgia may be facing another year of remote schooling.

“At first I was hoping that the pandemic problem would get solved soon and we could get by without buying a new phone,” Abzandadze said. “But with everything going on, I gave in and borrowed some cash. I’m going to go down to Tbilisi to get another phone before the school year starts.”

Many Georgian families face the same dilemmas as do the Abzandadzes. Virtual school means no-to-little school for many children – especially in remote areas. At least 50,000 children in Georgia lost access to education as a result of school migrating online, according to data collected by UNICEF.

“We have a serious digital divide problem as a lot of children don’t have access to internet, computers or mobile devices,” Maya Kuparadze, an education program officer at UNICEF’s Georgia chapter, told Eurasianet.

Asked which aspects of life have progressed and regressed most over the last year, Georgians picked education to be second-hardest hit, behind only the economy, according to an opinion poll conducted by the International Republican Institute.

The shift to remote education resulted in snags on several fronts, from technological to psychological. Both students and teachers struggled to adjust to the new environment, especially at the secondary school level, which spans 12 grades. In Georgia, some 2,000 secondary schools enroll 600,000 students and employ 63,000 teachers.

One of the biggest issues has been unstable internet access and poor digital skills among both teachers and students. “In the mountainous part of the Adjara region, for instance, we visited one school that serves several villages,” Kuparadze said. “Even though internet connection was set up there with a lot of publicity and fanfare, three days later the school got disconnected for reasons that we can only guess.”

For some educators, especially older and rural teachers, the switch to online instruction required a whole new skillset. “I specialize in the Georgian language. Computer language is Chinese to me,” said one schoolteacher from the mining town of Chiatura, who asked not to be named. “The mere mention of Zoom gives me twitches and I still somehow manage to press a wrong button,” she said.

Even before the pandemic, digital competence was a problem in Georgian schools. “Digital technologies are a growing part of modern teaching methods,” said Kuparadze. “This includes digital textbooks, learning and teaching software and online platforms. It all makes the learning process more interactive and efficient for both students and teachers.”

As schools in bigger cities increasingly incorporate those methods, schools in remote and mountainous areas are getting left behind, suffering from the lack of stable internet access and teachers’ lack of skills. On top of that, many of these schools face basic infrastructure problems, like lack of water and heat.

It all results in a wide disparity in university admissions between students from cities and villages. Studies in Georgia have shown that urban students consistently outperform rural students in university entry exams and are far more likely to get tuition waivers based on their performance.

“The pandemic basically brought to the fore the challenges Georgia has in providing education,” said Kuparadze. “The pandemic obviously created a lot of new problems, but it also made us clearly see the ongoing issues we had.”

This article is written as part of the Georgian Educational Advocacy Project, which is financed by the U.S. Embassy in Georgia. Any opinions expressed here are the views of the author and do not necessarily reflect the opinions of the U.S. Government.