COVID spikes in Armenia even as vaccine mandate goes into effect

Employers are now effectively required to demand proof of vaccinations from their workers. But the country’s health care system is now being pushed to the limit. 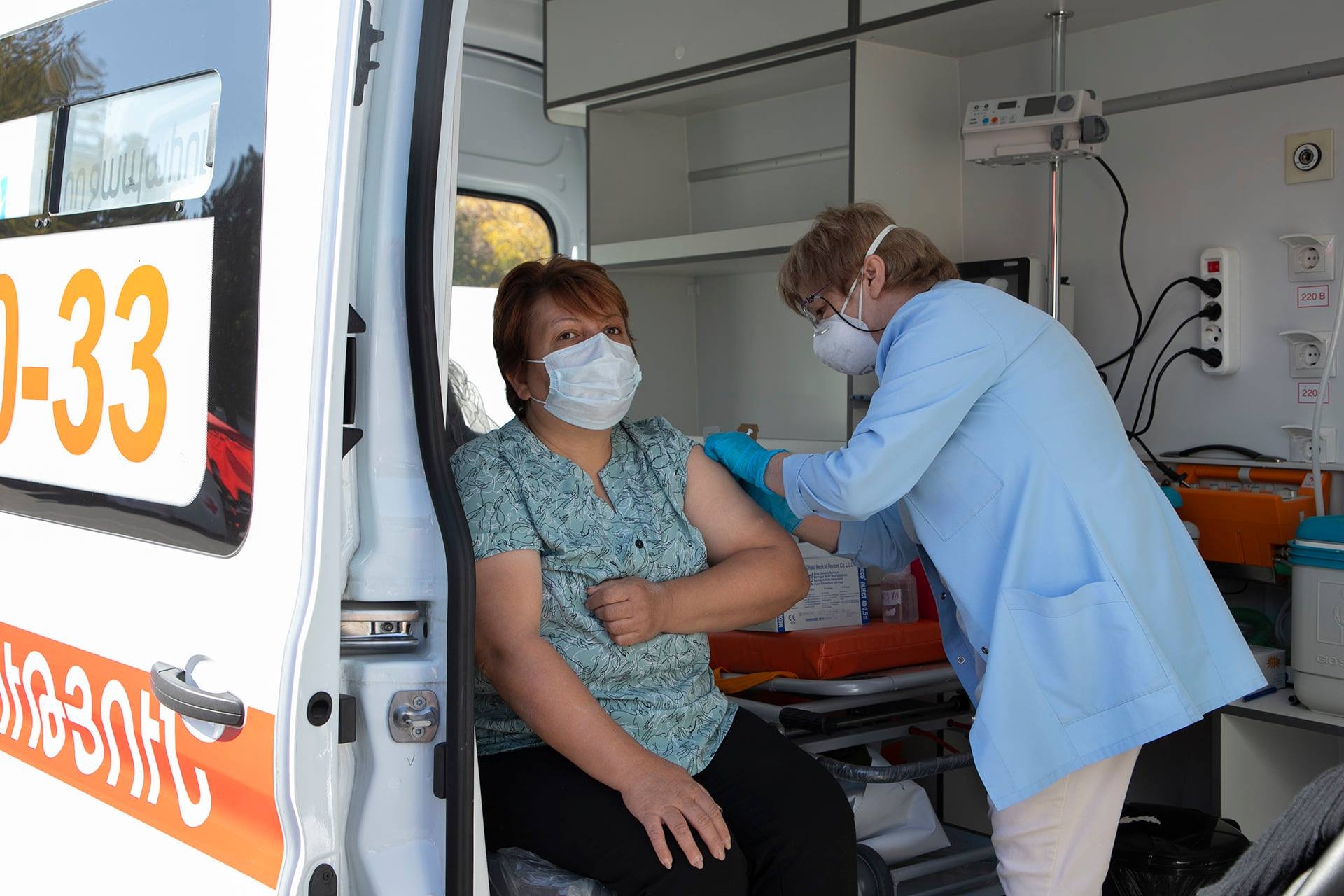 A woman gets vaccinated against COVID at a mobile clinic in Yerevan. (photo: Ministry of Health)

More Armenians are getting vaccinated against COVID, but the numbers remain the lowest in the region and the country is going through its worst wave of the disease yet.

According to the most recent government data, at most 7 percent of Armenians are fully vaccinated against COVID. That compares to 22 percent in Georgia, and 42 percent in Azerbaijan. And Armenia’s real numbers are in fact likely lower than that, as a significant portion of those who have gotten vaccinated in the country are visitors.

But Armenia’s pace is picking up: The number of those who have gotten their first shot is double that of the fully vaccinated, apparently in reaction to a new government mandate that requires employers to demand from their employees either a proof of vaccination or regular negative PCR tests.

Nevertheless, the number of registered new infections has reached more than 2,000 per day and the deaths due to COVID have been breaking domestic records, with highs of as many as 57 deaths in a day recorded in the last week. More than 6,000 Armenians have now died of COVID, in a population of under three million.

There have been nearly no COVID-related movement restrictions in the country since the beginning of the pandemic, and the government has signaled that it does not intend to implement strict ones even now. "There are countries that are returning to lockdown. […] Armenia won't have a lockdown,” Prime Minister Nikol Pashinyan said at an October 28 cabinet meeting. “Instead, we have to toughen the restrictions, maybe even making wearing masks outdoors mandatory.”

The employee vaccine mandate is the most significant step that the government has taken toward stemming the spread of the disease, and October 14 was the first day that employers were supposed to start enforcing the new rules. A visit by Eurasianet to Polyclinic 22 in Yerevan on that day found a mob scene, with doctors trying in vain to enforce social distancing rules on the large numbers of people who showed up to get vaccinated.

Many Armenians prefer to get vaccinated at polyclinics rather than the mobile clinics the Ministry of Health has set up around Yerevan and other cities. In Yerevan, those clinics are particularly crowded with foreigners, especially Iranians, who come for the relative ease of getting the jab in Armenia.

The vaccine in highest demand in Armenia is now the Chinese-produced Sinopharm, partly because it has a shorter wait time between doses (28 days) than the other vaccines on offer. There also is a widespread belief that Sinopharm’s side effects are weaker than those of the other vaccines.

Sputnik V and AstraZeneca also have been available in Armenia since May, and Armenia also has recently gotten supplies of Moderna. The latter was developed at a firm led by diaspora Armenian Noubar Afeyan, which has given it somewhat of a popularity boost among Armenians. But reports that the vaccine also is linked to heart problems among young adults has dampened enthusiasm.

At Polyclinic 22, supplies of Sinopharm ran out quickly and doctors told people hoping for that vaccine to return on November 1, when they expected to receive more supplies.

One 60-something man, Samvel (who didn’t give his last name), had been waiting outside the door of the clinic for three hours when a clinic worker came out to tell him: “Mr. Samvel, please go home, we only have 25 doses of Sinopharm and more than 50 people in line ahead of you.” But he was undeterred: “If I come on November 1, can you guarantee that I won’t have to wait for hours? I don’t think so.” He ended up waiting anyway and so many ahead of him in line got discouraged that he got his shot in the end.

On October 18, the Health Ministry announced it was importing a further 200,000 doses of Sinopharm, and four days later it said it was receiving a donation of 620,000 doses of Moderna.

In spite of the vaccine shortages, the government announced on October 26 that it was lifting restrictions on foreigners getting the vaccines; previously visitors had to prove that they had been in the country for at least 10 days to get inoculated.

Under the new employment regulations, the government can make random checks on places of employment to make sure that employees have either proof of at least one dose of a vaccination or a recent negative PCR test. The fine for individuals who violate the rules ranges from about $40-$80, for companies it is $250.

It’s not clear how many employees have yet to be vaccinated. The Ministry of Health has recorded about 200,000 people fully vaccinated in the country and 400,000 with one dose, but it doesn’t distinguish between Armenian citizens and foreigners in those numbers. The country has more than 600,000 legally employed people, according to government statistics, and the Armenian Statistical Service and the World Bank have estimated the number of unregistered workers in the country at between 300,000 and 700,000. It’s unclear to what extent these workers will be subject to the mandate.

As in many other countries where various forms of vaccine mandates have been introduced, some in Armenia are taking shortcuts. On October 13, the National Security Service announced that it had identified more than 700 people with fake vaccination certificates in the second city of Gyumri. Ten doctors have been charged in the case.

As of October 28, there were 3,100 people in Armenia hospitalized with COVID, of those 97 percent had not been vaccinated, Minister of Health Anahit Avanesyan said at the cabinet meeting. About 90 percent of the hospitalized had contracted the especially aggressive Delta variant of the disease. Of the 3,100, half are in critical condition, and of those 99 percent had been unvaccinated. Two hundred more infected are waiting to be hospitalized because there aren’t enough beds, she added.

Some hospitals have reported ventilators for COVID patients breaking down from overuse, and patients who need them having to do without. At the Vedi Hospital in the Ararat region, of 85 COVID patients only one of them – who had been vaccinated – didn’t require oxygen, deputy hospital director Samvel Khachataryan told RFE/RL.

Universities had opened for in-person classes this school year but on October 27 they moved back to online-only. Schools have extended the already-scheduled fall break for another week in response to the growing outbreak.

Meanwhile, there are regular scandals of senior officials and other elites openly flouting social distancing and other COVID regulations. President Armen Sarkissian hosted participants of a conference, the Armenian Summit of Minds, indoors at his residence; photos of the event showed none of the dozens of people wearing a mask, including Avanesyan, who regularly advocates for even vaccinated Armenians to wear masks. Current regulations require everyone to wear a mask in indoor places.

Anti-vaccine sentiment also remains widespread; Pashinyan tried to mitigate it by sharing his own family’s experience.

"There are questions regarding the effectiveness of the vaccines; I want to bring a personal example,” he told the October 28 cabinet meeting. “Six people in my family are vaccinated, except for the two underaged kids. Recently my 14-year-old daughter caught the virus. […] But nobody else in my family got it despite finding out late and having been in intensive contact with her.” Still, he added: “We could also get the virus. The protection is not 100 percent."