The country already leads in vaccination rates in the South Caucasus. Many expect the new rules to drive a black market for fake vaccination passports. 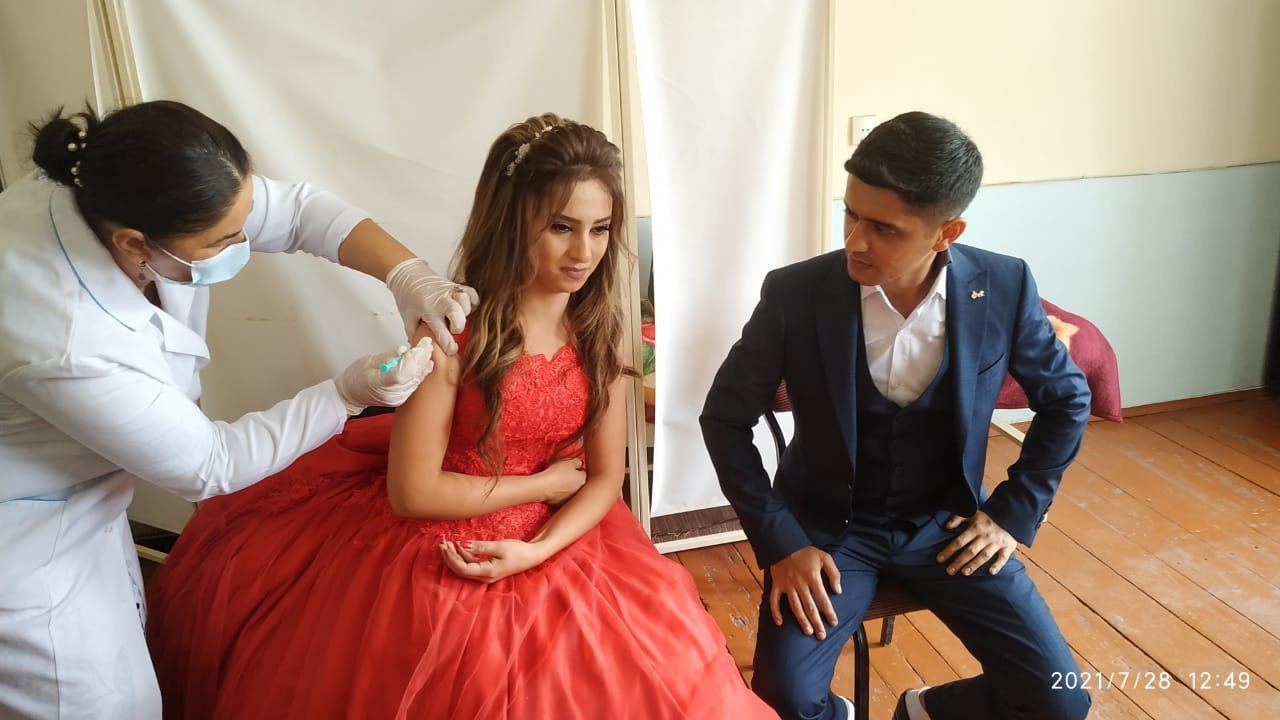 A soon-to-be newlywed couple in Azerbaijan gets vaccinated for COVID ahead of their wedding. (photo: media handout, Ministry of Internal Affairs)

Starting in September Azerbaijanis will have to show proof of a COVID-19 vaccination to enter most public indoor places, becoming the first country in the region to implement such a strict regimen.

Azerbaijan's Cabinet of Ministers announced the new regulations on July 26, making vaccination virtually compulsory in the country. As of September 1, people 18 and over will have to show proof of vaccination, via a “COVID passport,” to enter places including restaurants and cafes, shopping centers, and hotels.

In addition, all students 18 and over also will be forced to prove that they are vaccinated. And at least 80 percent of employees of government agencies, medical and pharmaceutical enterprises and scientific and educational institutions will have to get their first dose of a vaccine as of September 1, and their second dose by October.

People who for whatever reason cannot get vaccinated will get an exemption, with a special commission examining individual claims on a case-by-case basis, said Shahmar Movsumov, the head of the Department of Economic Issues and Innovative Development under the Cabinet of Ministers.

Azerbaijan started its mass vaccination program in January, relying primarily on the Chinese-made Sinovac vaccine. So far about 26 percent of Azerbaijanis have gotten at least one shot, the second-highest rate in the Caucasus and Central Asia, slightly behind Kazakhstan.

Azerbaijan eased its lockdown restrictions earlier this summer; on June 10 it reopened shopping malls, gyms, places of worship and beaches.

But numbers of infections have ticked up since then; on July 28 the government reported 750 new infections and three deaths. "If the epidemiological situation keeps getting worse, we will have to lock down because people are dying and hospitals are filling up,” Movsumov said. "If people get vaccinated in large numbers in a short time, there will be no need for closures."

In late May, Azerbaijan began to roll out COVID passports, which so far have been used mainly for gyms, as well as for weddings and other big parties. The events can have a maximum of 150 guests, and if they have more than 50 then all guests 18 and over have to show their COVID passport (which can indicate either full vaccination or recovery from the disease).

According to statistics from the Ministry of Internal Affairs, 2,218 people have not been allowed to enter weddings for lack of a COVID passport. Four people have been arrested and 83 fined for violating the wedding rules, the ministry reported.

In one case reported on July 29, police checking COVID passports at a wedding in the Zardab region found that the bride and groom themselves had not been vaccinated. The couple then went to a nearby clinic, got their first shots, and rejoined their wedding party, local media reported.

The wedding restrictions also have spurred widespread bribery to evade the rules as well as a black market in fake COVID passports.

One Bilal Mammadov, commenting on Facebook on an article about the new regulations, said that he attends weddings “every day.” Public health officials come “and take a 500 manat [$294] bribe and then leave,” he wrote. “Then the police come, I don’t know how much they take. No one asks for a COVID passport.”

In many countries, similar vaccination requirements have inspired many people who had not been previously vaccinated to get the shot. But cynical Azerbaijanis expect more of their vaccine-hesitant compatriots to instead resort to bribery and the black market.

“Today for the first time I met a person who has not been vaccinated but has a passport,” economist Togurl Mashalli wrote on his Facebook page on July 26. “By September 1, the number of such people is going to increase manifold. Our people try to follow world trends, but there is no use in copying these kinds of meaningless steps.”

Local media also have been reporting on the practice. “A citizen can get a vaccination certificate for a certain fee paid to a medical worker,” one state-run outlet, ASAN Radio, reported. “According to our information the citizen allegedly undergoes the ‘procedure,’ but the vaccine is not injected into the body. We have appealed to the relevant authorities to eliminate fraud.”

One former member of parliament, Nazim Baydamirli, said that several people ask him for advice every day on how to get a COVID passport. “I tirelessly explain to everyone that they shouldn’t be afraid to get vaccinated,” he wrote on his Facebook page. “I am convinced that a large number of educated people, who should be educating the public, also ‘bought a passport.’ They are making our society ignorant!”