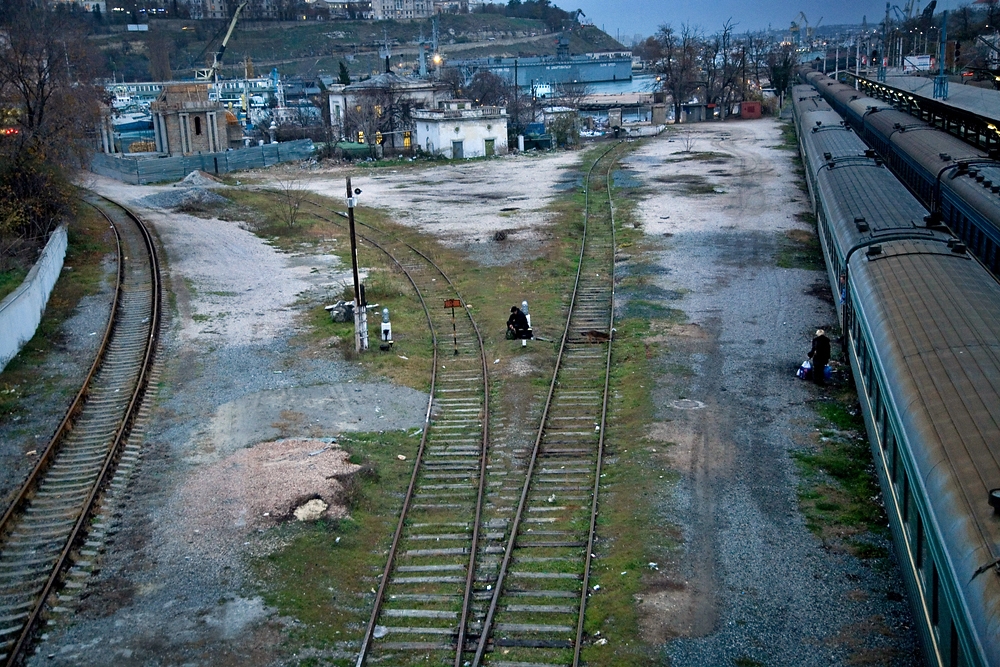 Trains are parked at the main station in Sevastopol, Crimea, in October 2008. Estimates have pegged the costs associated with Russia’s annexation of Crimea in March at $50 billion, but officials are starting to acknowledge the costs are likely to spiral upwards, as the local economy in Crimea appears headed for a crash. (Photo: Justyna Mielnikiewicz)

The Kremlin has decided to spend its entire federal-budget “anti-crisis fund” on propping up Crimea’s governing apparatus and economy in 2014. The bulk of the fund comes from Russians’ 2014 retirement contributions, totaling 243 billion rubles (about $7 billion). These funds now will not be invested, but rather “borrowed” by the government. The money will not be returned to citizens’ individual retirement accounts; instead, contributors are set to receive “retirement points.” These points have a monetary value that remains unclear, and which appears vulnerable to arbitrary manipulation by officials in charge of Russia’s government-run Pension Fund.

In addition, Russia’s Ministry of Economic Development has revealed that the government is planning to increase electricity rates for Russians by 16.3 percent by the end of 2017, as opposed to a 11.2 percent hike that was previously planned, according to a report distributed by the Interfax news agency. A ministry statement explained that the increase was needed to “finance activities to increase the capacity and ensure reliability of power systems in Crimea and Kaliningrad oblast.” The increase will be phased in over a three-year period: rising 6 percent in 2015; followed by a 5-percent increase in 2016 and a 4.5-percent hike in 2017.

Preliminary estimates pegged the costs associated with Russia’s annexation of Crimea in March at about $50 billion, roughly as much as Moscow spent on hosting the Sochi Winter Olympics. But officials are starting to acknowledge that the costs are likely to spiral upwards, as the local economy in Crimea appears headed for a crash. The peninsula is heavily dependent on tourism, and early returns, based on post-annexation data, suggest that this summer’s tourist season could be among the worst on record due to annexation-related factors.

Soon after Moscow announced the diversion of its anti-crisis fund to Crimea, Russia’s minister of economic development, Alexei Ulyukayev, revealed that funding the peninsula’s day-to-day spending will require another 130 billion rubles ($3.75 billion) this year alone, adding that in 2015 and 2016, annual spending needs will further “increase somewhat.”

The crisis fund will be used to cover what might be described as operating expenses. “This money will not be spent on roads, the energy sector, or housing and utilities infrastructure,” but rather used to support Crimea’s ongoing needs, including the increase of salaries for government employees, a Russian government official told Newsru.com.

To address Crimea’s infrastructure development, the Kremlin announced in mid-May that it had canceled two major infrastructure projects, one in Siberia and one in North Caucasus, and that the allocated funds, totaling 112 billion rubles ($3.23 billion), would be redirected to Crimea. The move faced pushback from some high-ranking government members, with Minister of Transport Maxim Sokolov pledging to “fight” for the canceled projects.

Putin administration officials had earlier indicated they would not defund programs elsewhere in Russia to finance Crimean annexation. Now, it appears that many more infrastructure projects throughout Russia are in danger of cancellation. The money saved from the two projects already canceled can barely cover half the projected cost of one major Crimea-related project – the construction of a bridge connecting mainland Russia to Crimea, a span expected to cost close to $6 billion.

Kremlin pilfering of citizens’ pension contributions may continue for years to come, especially if energy-export revenue begins to lag. Aside from Crimean infrastructure needs, increased pension commitments and administrative costs are set to cost the Russian government at least $3 billion annually. In addition, repairing damage done by annexation will cost large sums. For instance, Ukraine’s recent move to limit water supplies to Crimea is expected to result in a drastic decline in the peninsula’s agricultural output, as well as devastate its vineyards and orchards, according to Russian Minister of Agriculture Nikolai Fyodorov. He added that most of the costs, estimated to reach five billion rubles (about $150 million) this year alone, will be “compensated from the federal budget,” along with expenses for supplies from mainland Russia to prevent shortages of drinking-water and food.

“The Kremlin has not even started investing in [Crimea’s] infrastructure yet, but it has already depleted much of its reserve funds and has to resort to defunding key social and infrastructural projects elsewhere in Russia,” said a Crimea-based analyst, speaking on condition of anonymity for fear of repercussions. “Putin has spent billions, and will have to spend much more, on all sorts of “crisis situations” in Crimea that bleed Russia of money, but provide no payback.”