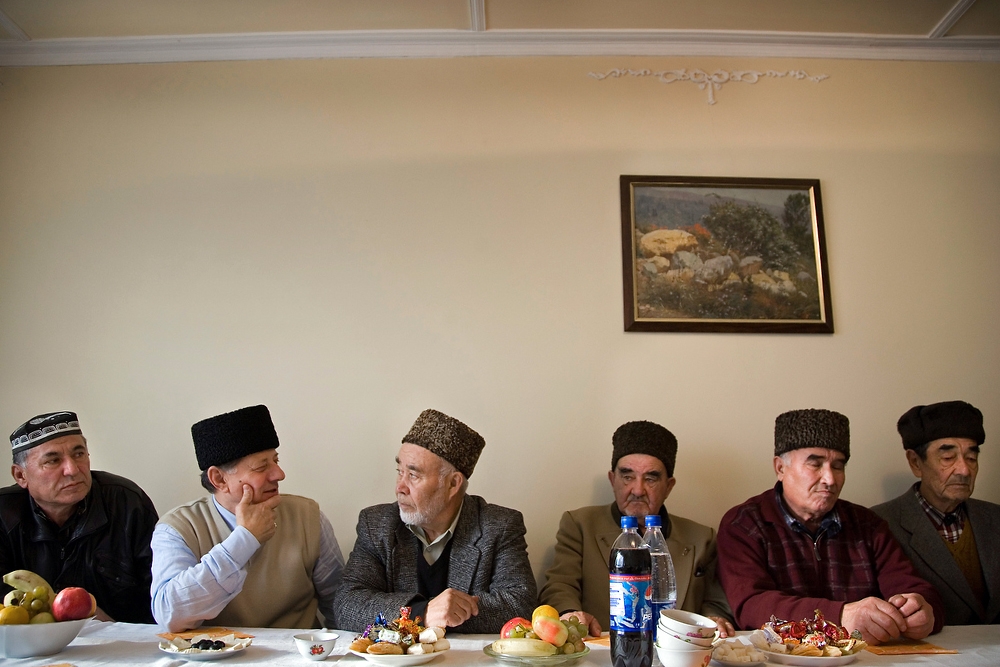 Ethnic Tatars attend a wake for Crimean Tatar poet and translator Selim Shakir at his house in Simferopol in November 2008. Before Russian troops invaded Crimea and the peninsula was annexed by Russia, about 300,000 ethnic Tatars had returned to resettle in Crimea after the fall of the Soviet Union in 1991. (Photo: Justyna Mielnikiewicz)

Turkey has professed itself the steadfast defender of the Crimean Tatars’ minority rights, but, so far, that mission has not interfered with its interest in trade with Russia, its largest export-import partner.

The declarations of official concern continue, however. On a November 10 visit to Kyiv, Turkish Foreign Minister Mevlut Çavuşoğlu announced plans to send an unofficial monitoring mission to Crimea to investigate claims of human rights violations against the ethnic Crimean Tatar population.

The move is Ankara’s first concrete step to support the Crimean Tatars, who claim they have been repressed and silenced by the local, de-facto pro-Russian authorities in the months since Russia’s March annexation of the Ukrainian peninsula.

The entire Crimean Tatar population was deported under Soviet leader Josef Stalin to the steppes of Central Asia in 1944; as many as half perished during the arduous journey. About 300,000 returned to resettle in Crimea after the fall of the Soviet Union in 1991, and most opposed Russia’s move to absorb the peninsula this spring.

Their opposition has not been tolerated. At least seven Crimean Tatar activists have “been forcibly disappeared or have gone missing” since May, Human Rights Watch said in an October report. Two other Crimean Tatars without apparent political ties have also gone missing and one was later found hanged, “contributing to the atmosphere of fear and hostility in Crimea for anyone who is pro-Ukraine, including Crimean Tatars,” the report said.

Mubeyyin Batu Altan, founder of the New York-based Crimean Tatar Research and Information Center, said that while the news of the Turkish fact-finding mission is welcome, many in the Crimean Tatar community feel abandoned because Turkey, which has long styled itself as the defender of the Tatar people, has not done more.

In fact, while the United States and European Union have levied steadily increasing sanctions against Moscow for its annexation of Crimea and its support for rebel groups in eastern Ukraine, Turkey eagerly has pursued investment deals in Russian sectors ranging from agriculture to car parts, according to reporting done by this correspondent for Mergermarket.

One week after Russia, announced a one-year ban on Western food products this August, Turkish Economy Minister Nihat Zeybekci described Russia “as an opportunity for Turkey.”

“We should make this opportunity a strong, long-term, permanent and corporate one,” he said.

In September, as part of that “opportunity,” Turkish shoe producer Yakupoğlu Deri Sanayi inked a $100-million contract to provide boots for the Russian military. The same month, a Turkish exporters’ association announced tentative plans to nearly triple food exports to Russia to $3 billion by 2015.

“Those Russian soldiers are wearing Turkish boots to kick and punish the Crimean Tatars,” he said. “From that point of view, Turkey cannot do anything different for us than the international community [can].”

The Turkish foreign ministry did not respond to questions about its policy toward the Crimean Tatars. The ministry’s website,  however, describes the “high level of economic relations” as “the most important component” of Turkey’s ties with Russia.

At one time, Turkey took a different view. The Ottoman Empire, and then the Turkish Republic, asserted themselves as the chief defenders of Turkic peoples, including the Crimean Tatars, across Eurasia; a position that contributed to war with Tsarist Russia over Crimea, an Ottoman-controlled territory, in the 1850s.

As Russia increased its hegemony over Central Asia and the Black Sea region in the early 1900s, the dream of a politically unified state of Turkic peoples faded.
Nonetheless, especially since the fall of the Soviet Union in 1991, the idea of expanding political, cultural and social ties with other Turkic ethnicities remains highly popular, noted Eşref Yalınkılıçlı, a Eurasia analyst and news editor at Turkey’s public broadcaster TRT.

Because Turks themselves originally migrated from Central Asia, strengthening ties to these communities is seen as honoring their own past and identity, Yalınkılıçlı said.

“In their hearts, and in the Turkish education system, this pride in Turkishness is really emphasized and people would really like Turkey to reach beyond the Caspian Sea, but they are also aware that it is not realistic,” he said.

Turkey’s geopolitical realities now include a destabilized Middle East and the country’s own skyrocketing energy demand – a thirst that relies heavily on Russia.

Turkey currently receives about 10 percent of its oil and 50 percent of its natural gas from Russia, and with a rapidly growing economy it needs ever more. In 2013, Turkey had the highest consumer energy prices among the 34 members of the Organization for Economic Cooperation and Development, and its electricity demand is expected to grow at a rate of seven percent per year through 2020.

In this situation, Turkey has little room to maneuver in pushing Russia on the Crimean Tatar issue, Yalınkılıçlı said.

“Turkey can criticize, but I’m not sure if it can do it loudly,” he said.

Crimean Tatars have resigned themselves to this reality, Altan claimed.

“The Crimean Tatar problem will be sooner or later forgotten, because we are such a small people and we do not have any economic strength,” he said. “We strongly depend on the international community’s actions; whatever action they take is all that is available for us.”

Nicholas Clayton is a reporter based in Istanbul.