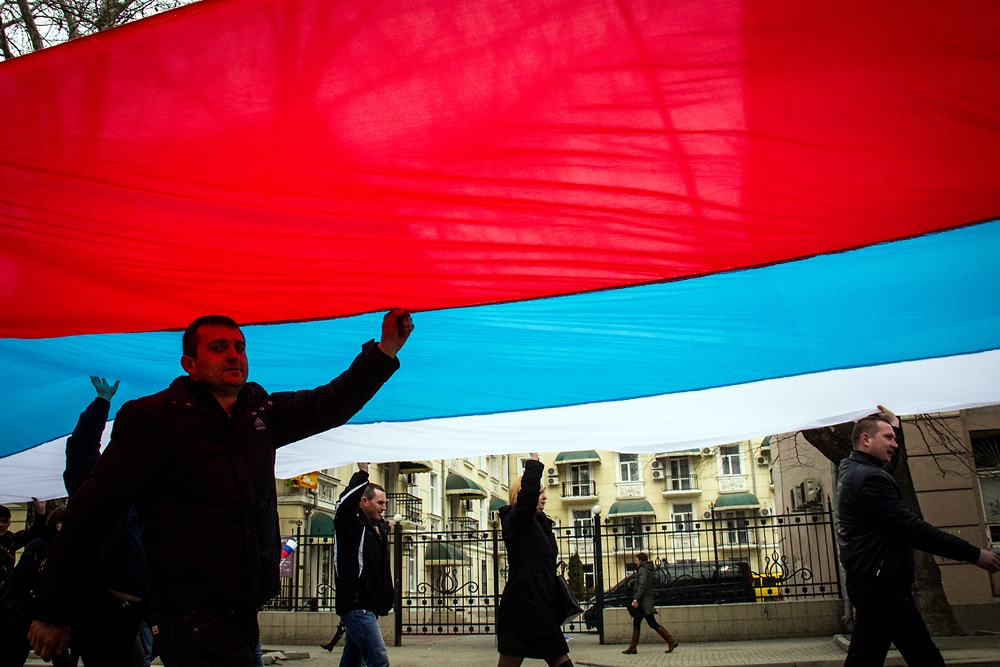 At its easternmost tip, the border between the Crimean peninsula and Russia runs through a channel, where a forty-minute ferry ride connects the Ukrainian city of Kerch to the Russian side. In recent days, travelers to Kerch have been met by soldiers toting automatic weapons who don’t seem inclined to leave anytime soon.

Russia has effectively seized Crimea over the course of the past week, sending thousands of unmarked troops to take control of strategic points across the peninsula, surround Ukrainian military bases, and occupy the Crimean parliament building in Simferopol.

At the port in Kerch, soldiers, presumably Russian, roamed aimlessly, reading newspapers on benches outside the ferry ticket hall and chatting with travelers waiting to cross over to the other side. They wore fatigues and carried AK-47s, but their magazine clips were empty and their helmets unstrapped; they weren’t worried about the potential for resistance.

"Everyone here is friendly with each other," said one wide-eyed young soldier who declined to give his name. "We used to have this thing called the Soviet Union together."

Ukraine’s new leadership in Kyiv views recent developments through a very different lens. "This is not a threat, this is actually a declaration of war to my country," Prime Minister Arseny Yatsenuk told reporters on March 2, referring the Russia’s actions in Crimea. "We are on the brink of the disaster."

The takeover has been peaceful – so far. For a large percentage of the local population, deep historical and cultural ties make Russia's return seem logical, even inevitable. If Russia and Crimea are not linked by land, then they are by blood. The peninsula, which was transferred from Russia to Ukraine in 1954 by Soviet leader Nikita Khrushchev, remains home to many mixed families and a wellspring of pro-Russian sentiment so deep that most cannot fathom calling the presence of Russian soldiers here an "invasion."

"I grew up in Russia, am married to a Ukrainian, and now live in Crimea," said Lilia Kukina, who was on her way to see a daughter studying in Moscow. "Practically everyone in Crimea has ties to Russia."

"This was once a part of Russia. Why not make it so again?" added Alexander Belozorenko, Ms. Kukina's Ukrainian husband.

Not everyone is so sanguine about the notion of Crimea’s forced return to Russia. Ethnic minorities -- especially Crimean Tatars, a people deported en masse to Central Asia during World War II, when Stalin accused them of being Nazi sympathizers – have deep misgivings about the recent turn of events. Tatars endured hardship and discrimination throughout the last decades of the Soviet era. Many Tatars returned to their homelands after the collapse of Communism in 1991 – the Tatars make up roughly 12 percent of the current Crimean population – and they now fear the current struggle will leave them playing the victim once again.

On March 1, a palpable sense of fear hung over Khoshkeldi, an ethnic Tatar village near the Crimean capital of Simferopol. "Reason has disappeared," said Seit-Umerob Murat. "There is no common sense left. And people, only simple people will suffer."

Perhaps in evidence of Murat's point, evoking Nazism has become a favorite trope of the pro-Russian protesters in central Simferopol. They gather daily, waving Russian flags and handing out orange and black St. George ribbons, which symbolize victory over Nazi Germany in World War II. For many of these Crimeans, the new government in Kyiv is composed of modern-day fascists. Echoing characterizations often used on Russia's TV channels, widely available here, they also routinely compare the current leadership in Kyiv to Stepan Bandera, a Ukrainian nationalist who was willing to collaborate with Nazi forces in his efforts to forge an independent Ukrainian state.

“Those in Kyiv are Bandera-esque bands and Nazi rabble," a man who identified himself as Vitaly Leonidovich, said adding that he had retired as a military officer in Simferopol. "They threw out a legally-elected president, called themselves leaders, and are trying to decide Ukraine’s fate. Nothing will come out of this.”

Throughout February, chaotic scenes in Kyiv and the opposition's lack of legitimacy among many Crimean residents set the stage for a Russian take-over. An ominous example of where events were headed occurred in Kerch on February 22nd, when a small pro-Maidan crowd gathered, only to be attacked by counter-protestors; local police stood by as a felled man was kicked in the head repeatedly, left bloodied and bewildered.

On March 2, the center of Kerch was calm: children enjoyed carnival rides and toddlers spun around the central square on tricycles, peddling in the shadow of a recently-raised Russian flag and a Lenin statue adorned with a sign that read, "Kerch is a city of heroes. Crimea is Russia."

"We're simply closer to Russia in every way," Nadezhda Belashova, 56, said. Gesturing toward the sea, she added, "Just look, you can see it over there."

Indeed, standing on the coast, Russia loomed, a dark silhouette on a hazy horizon.