The church is rocked by “sodomy” allegations, power struggles and a poisoning conspiracy. 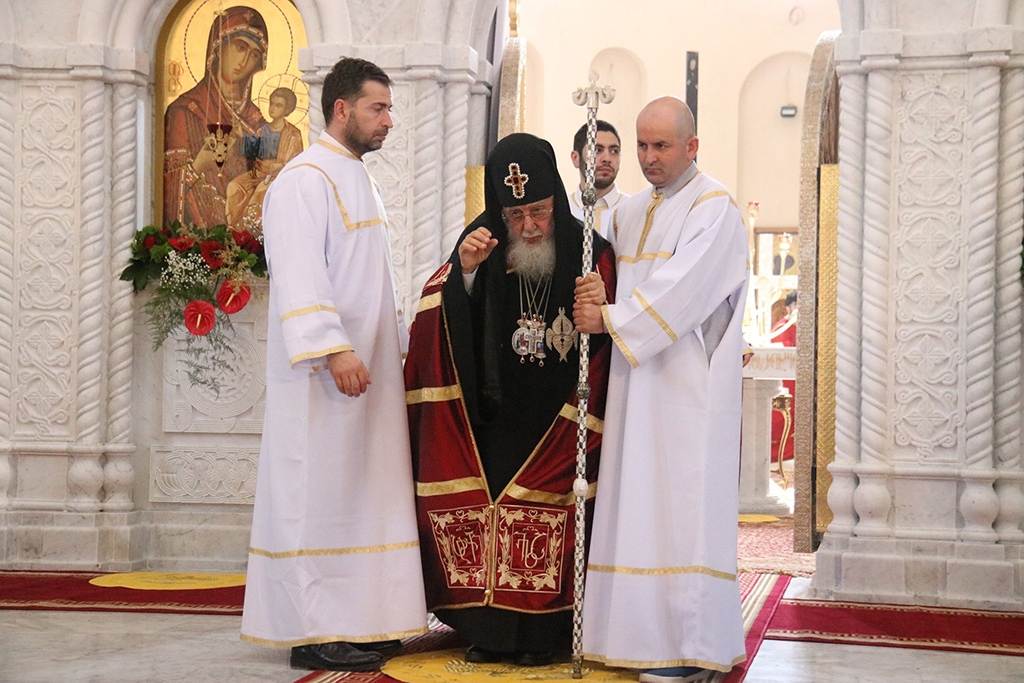 Patriarch Ilia II is not a name to take in vain in the fervently devout Christian nation, where the church has a say in everything from local issues to foreign affairs (Georgian Patriarchate’s Facebook page)

An angry archpriest, his clerical headgear disheveled, stormed out of the holy see of the Georgian Orthodox Church and declared that the church leader, Patriarch Ilia II, was a “sodomite” and “pederast.” The archpriest, Bishop Petre of Chkondidi, then waded through a crowd of journalists and drove off in a huff, leaving a national scandal in his wake.

Fellow archpriests soon emerged from the October 31 meeting of the Holy Synod, an executive council of the church, and reported that they had to physically restrain Petre as he tried to attack the frail, 86-year-old patriarch. “His actions were so disgraceful that we had to remove him by force from the meeting,” said one of the clerics, Bishop Nikoloz of Akhalkalaki and Kumurdo.

Both the journalists on the scene and their audiences across Georgia had to take a moment to process what they had just seen and heard.

Patriarch Ilia II is not a name to take in vain in the fervently devout Christian nation, where the church has a say in everything from local issues to foreign affairs. Even political leaders at the highest level seek the blessing of the veteran pontiff, whom most Georgians see as a divine, fatherly figure.

No cleric has ever shown open disrespect for Ilia, let alone claim, like Petre did, that the patriarch was personally “afflicted by the sin of sodomy.” The Georgian church is known for its hostility toward homosexuality and regularly promotes homophobia.

Government officials, fully aware of the influence of the patriarch, took turns to register their respects. “The Georgian patriarch is a symbol uniting Georgia’s past, present and future,” said Prime Minister Giorgi Gakharia. “Such unimaginable attacks on the patriarch, our spiritual symbol, amount to attacks on our country, our statehood.”

Petre’s outburst brought to a boil a long-simmering conflict in the church, including allegations of government conspiracy to remove the ailing patriarch and one priest’s plot to poison his aide. Church analyst Beka Mindiashvili said that Georgia is witnessing an intensifying struggle for succession. “It all boils down to that,” Mindiashvili told Eurasianet.

The struggle could have far-reaching consequences for Georgian politics, both domestic and foreign. “It is obvious that political forces have their preferred candidates [for the next patriarch],” said Kornely Kakachia, the director of the Georgian Institute of Politics, a Tbilisi think tank. “It is evident from the different takes television channels have on this,” he said.

Broadcast media is largely divided into pro-government and pro-opposition camps in Georgia. The former, like the government, appears to support the patriarch, while the latter has given favorable coverage to Petre.

Patriarch Ilia II appears to have groomed an heir apparent, a 48-year-old Bishop Shio, but other senior clerics have also set their sights on the position. This group is believed to include Bishop Iakobi of Bodbe, himself the center of another dramatic church scandal.

In a recent interview, Iakobi claimed that top government officials asked him to help expedite the transfer of power from Ilia II to Shio.

Iakobi also attended the scandalous Synod meeting, where he said that he asked for the patriarch’s forgiveness for the crude language he had used in his public statements. But he stuck to his guns regarding his claims of conspiracy against the patriarch, additionally claiming that Gakharia and Bishop Shio favor friendlier ties with Moscow, Georgia’s main foe.

Based on such statements, some observers believe that the ongoing holy wars are not just a domestic affair. “Not just political, but geopolitical forces have their stakes in this,” Mindiashvili said.

Despite the intractable territorial conflict between the two countries – Moscow heavily backs two breakaway regions, Abkhazia and South Ossetia – many Georgian clerics see a natural ally in Russia, which shares the Orthodox Christian faith with Georgia. They fear that Western-style liberal democracy will be bad for the influence of the church in Georgia and tend to oppose the government’s Western integration agenda.

“No matter who wins, an about-face in foreign policy is unlikely, but if the pro-Russia camp prevails in the church, the process of cozying up to Moscow will intensify,” Kakachia said.

Infighting in the church has become increasingly public since the uncovering of a poisoning conspiracy two years ago. Petre has long insisted on the innocence of archpriest Giorgi Mamaladze, who is now serving a prison sentence for attempting to put cyanide in the coffee cup of the patriarch’s personal secretary, whom many see as the true power behind the aging patriarch’s throne.

Petre’s outspoken expressions of support for the convicted priest put him at odds with the patriarch and his supporters. The disgraced bishop pushed the Holy Synod to issue a petition asking for Mamaladze’s pardon. The Holy Synod did eventually issue the petition on October 31, but the discussion nevertheless got out of hand.

According to other senior clerics at the meeting, Petre lost his cool after Ilia II relieved him of his pastoral duties and prescribed for him a life of repentance in a remote monastery. Many dismissed his claims of homosexuality, taking them as a burst of anger after having been fired, but some prelates took a more cautious line.

“I have no reason to trust or distrust his statements,” said Bishop Anthon of Vani and Baghdadi. “I respect the prelate but he needs to present proof,” said Bishop Saba of the North America Diocese.

News and social media erupted in an animated and unprecedentedly open debate on homosexuality and the power struggle in the Church. Many clergy members spoke up for the spiritual leader, but a few prominent clerics also took open swipes at the patriarch.

“John the Golden-Mouthed was also dismissed for speaking the truth,” said Father Andria in support of Petre, in comments to the television network Mtavari Arkhi. Andria – the head of a monastery, Chkondidi, which was under Petre’s diocesan jurisdiction – added that years of deference by lay and clerical authorities have created a personality cult around the patriarch, making his actions impervious to public scrutiny.

Some LGBTI Georgians felt vindicated by the talk of homosexuality in the notoriously homophobic Georgian church. But LGBTI advocacy groups criticized the use of homosexuality as a slur. “Let’s not forget that we live in a secular state, where homosexuality is not a crime, let alone a sin,” said Equality Movement, an LGBTI rights group, in a statement.

All the power play, scandals and mud-slinging in the church are painful for Georgia’s faithful to watch. Many took to social media to share support and prayers for their beloved patriarch. Ilia II appeared at a sermon on November 3 to thank believers for the support and departed to ovations from the crowd gathered in the Holy Trinity Cathedral in Tbilisi.

In a propitious coincidence, as the patriarch was making his exit two jets flew high over Tbilisi, leaving contrails in a shape of cross in the sky. Georgian believers, wont to see omens and miracles, shared the video of vapor trails across the internet, interpreting the celestial cross as yet more evidence of the patriarch’s divine nature.