Fighting surges in a new area, Aliyev meets Putin in Moscow, Azerbaijan again steps up the info war against Armenia, and the EU throws its hat into the conflict resolution ring. This week’s Post-War Report. 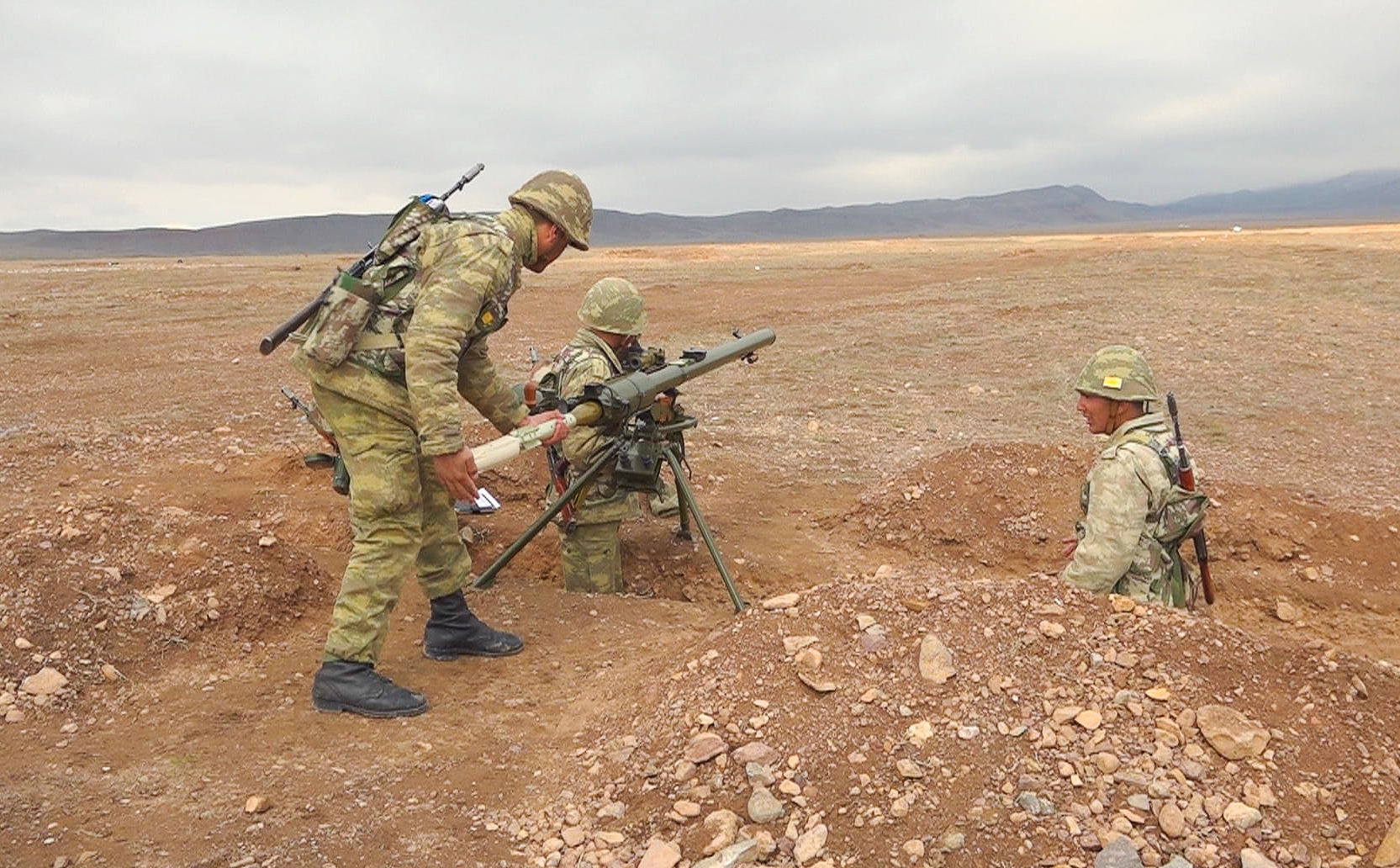 Some of the heaviest post-war fighting between Armenia and Azerbaijan took place this week, as tensions continued to escalate between the two sides.

Armenian and Azerbaijani forces exchanged fire for hours starting late July 19 near the Armenian town of Yeraskh, on the border of Azerbaijan’s Nakhchivan exclave, an area that had previously seen little tension. The firing included grenade launchers, the Armenian Ministry of Defense reported. Among the wounded was the mayor of Yeraskh. 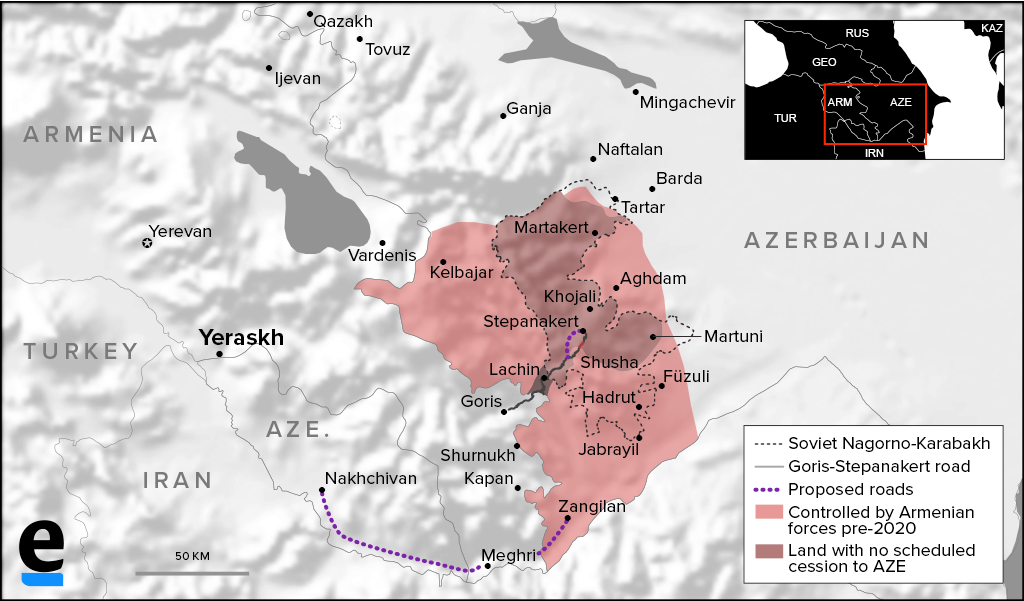 It was perhaps the most serious fighting since a Russia-brokered ceasefire ended last year’s war in November, and it got the world’s attention with the European Union and United States calling on the two to stop fighting and engage in “substantive negotiations,” in the U.S.’s words.

The timing of the violence likely was not a coincidence. The next day, Azerbaijan President Ilham Aliyev flew to Moscow to meet with his Russian counterpart, Vladimir Putin. It has been a long-established pattern that some kind of fighting breaks out and demands the world’s attention precisely when Baku is unhappy with the pace of negotiations with Armenia to resolve the conflict.

And so it happened this week, although the public comments following the Kremlin meeting curiously downplayed the tension. Aliyev spoke in only very general terms, as did Putin, who thanked Aliyev for the fact that "so far we have always been able to come to compromise solutions" in the conflict – a rosier view of the situation than most might take. And Moscow, unlike Brussels and Washington, did not respond immediately to the outbreak of fighting near Nakhchivan.

But no doubt the conflict took up a significant portion of Aliyev and Putin’s behind-closed-doors time. Azerbaijan has been making it plain that it wants to start real talks over a final resolution to the conflict, which would include Armenia’s formal recognition of Azerbaijani sovereignty over its territory. And Baku has – with steadily escalating force – been applying a variety of instruments to try to force Yerevan to come to the table.

In the face of this Azerbaijani push, the Armenian government has been either silent or feckless, not least because in its weakened post-war state it has few of its own levers. But one figure seems poised to take advantage: Robert Kocharyan, the former president and now opposition leader.

Following his recent announcement that he will not take the seat in parliament that he earned after his coalition won second place – albeit a very distant one – in elections last month, Kocharyan appears to be positioning himself as an extra-parliamentary gadfly. He gave a lengthy interview to several Armenian networks that aired on July 21, and Azerbaijan was high on the agenda.

“It’s completely possible that the events in Yeraskh are preparing the way for a peace agreement, which wouldn’t be signed without Armenia’s recognition of Azerbaijan’s territorial integrity,” he said. As tension increases, “the signing of such a document will be perceived not as a betrayal, but as salvation,” he continued. “And that would be the end of Karabakh.”

Laurence Broers, a scholar of the Caucasus, had a similar take on Azerbaijan’s motivations. “Baku is seeking to avoid a repeat of the 1990s – where the militarily victorious side, then Armenia, was not able to consolidate its victory into a favorable peace from a position of strength,” he tweeted following the Nakhchivan-Yeraskh flareup. “Azerbaijan is consequently seeking to maximize pressure on Armenia to force it into a comprehensive peace agreement, for which – from Baku’s perspective – there will never be a better time than now.”

One is a sort of soft territorial claim, in which Azerbaijan makes “historical” claims to Armenian territory, while stopping short of formally politically claiming the land for itself (as the Armenia-backed, self-proclaimed Nagorno-Karabakh Republic has done in Azerbaijan). Aliyev rolled out that strategy again last week.

Baku is now going to start using Azerbaijani names for geographical entities inside Armenia, pro-government media reported. “Baku started to announce the historical Azerbaijani names of cities, reservoirs, regions and mountain systems of present-day Armenia only after it became finally clear that the latter does not agree to peace,” one pro-government commentator, Vafa Ismayilova, wrote on July 22. “Yerevan’s actual refusal to recognize Azerbaijan’s territorial integrity means that Azerbaijan no longer considers itself obliged to recognize Armenian’s territorial integrity.”

The issue of territorial integrity – that is, Armenia’s refusal to acknowledge Azerbaijani sovereignty over the territory of the former Soviet Nagorno-Karabakh Autonomous Oblast, part of which Armenian forces still control – is the biggest substantive stumbling block to a final resolution. But the two sides also have different takes on the format negotiations should take.

European Council President Charles Michel made a trip around the region last weekend, and offered the EU’s diplomatic services – alongside those of the Minsk Group of the OSCE, the Russia, U.S. and France-led body that mediated pre-war peace talks but which has since been sidelined.

Neither side directly formally addressed the EU proposal, but Armenia has been saying that it would be amenable to negotiations under the standards that the Minsk Group had been working on pre-war, which included the principle of the people in a territory to determine its status – in this case, that the Armenians of Karabakh would have a say in how they were ruled.

"Armenia is willing to be involved in the Nagorno-Karabakh peace process based on the approaches proposed by the OSCE Minsk Group […] including the right to self-determination," Armenia’s acting foreign minister, Armen Grigoryan, told foreign ambassadors in Yerevan on July 20.

But Azerbaijan has a lot less interest in the Minsk Group now – even more so after the U.S., France, and Russia appear to have coordinated on a snub of Baku’s invitation earlier this month to tour Shusha, the jewel of the territories that Azerbaijan retook last year. Baku further considers the principle of self-determination no longer relevant following the war, and that Karabakh not only will be part of Azerbaijan but will not even have any sort of autonomous status.

Privately, Baku was “outraged” by the EU’s offer, the Russian newspaper Kommersant reported, citing an unnamed “informed source in Baku.” In his comments in Yerevan, Michel also had raised the issue of the need to resolve Karabakh’s status.

“For Baku, which considers the conflict to be resolved, the question of some kind of status is a red flag,” Kommersant’s source said. In addition, Baku sees EU involvement as a back door for French involvement; Paris has taken a noticeably pro-Armenia approach in the conflict.

Russia, meanwhile, took a sort of middle ground, welcoming EU involvement – as long as it was within the framework of the current, Russia-brokered ceasefire statement. "If mediation efforts bring stability and predictability, and facilitate the implementation of the existing agreements, they should be welcome,” Kremlin spokesperson Dmitriy Peskov told reporters on July 21.

And in his own lengthy interview, aired July 23 on state TV, Aliyev put a positive spin on Michel’s statements, noting that the EU leader didn’t utter the word “status” – at least while he was in Baku.

Aliyev further riffed on the status issue, making some rare comments about Stepanakert – the capital city of Karabakh, which remains under Armenian control following the war and which Aliyev generally seems to treat with careful ambiguity. In this interview, though, he went on at some length about Azerbaijan’s intelligence-gathering capabilities in the city, which he claimed now has only about 25,000 residents.

While that is almost certainly an undercount – its pre-war population was roughly 50,000 and by all accounts it has gotten more crowded since then with Armenians displaced from other parts of Karabakh – Aliyev used the claim to further discredit the idea of any kind of autonomous status for the region under a (still only implied) reassertion of Azerbaijani control. “Under what kind of logic would you create a status for only 25,000 people?” he asked.