The Russia-led security bloc will be sending peacekeeping forces, the first time in its history that its collective security provision has been exercised. 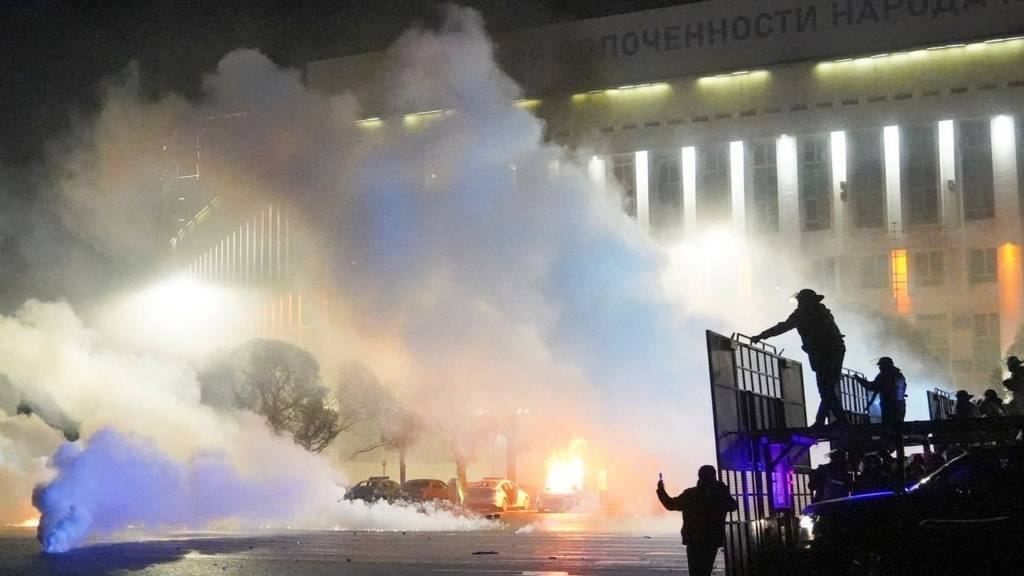 A Russia-led security bloc has agreed to intervene in Kazakhstan’s spiraling unrest, the first time in the organization’s 30-year history that it has done so.

The Collective Security Treaty Organization (CSTO) acceded to a request by Kazakhstan President Kassym-Jomart Tokayev on January 5 to send military assistance, which he said was needed "to help Kazakhstan overcome this terrorist threat."

“In light of the threats to national security and sovereignty to the Republic of Kazakhstan, including from external interference,” the CSTO agreed to send the organization’s collective peacekeeping forces to Kazakhstan “for a limited period of time with the aim of stabilizing and normalizing the situation,” Pashinyan wrote in a Facebook post.

No details were provided, and it wasn’t immediately clear where the forces would be coming from or what their mission would be. Russian media reported that an aviation regiment in the city of Orenburg, close to the Kazakhstan border, was “on alert to be deployed to Kazakhstan.”

The CSTO is effectively led by Russia; its other member states are Armenia, Belarus, Kazakhstan, Kyrgyzstan, and Tajikistan. Article 4 of its charter states that: “In the case of aggression (an armed attack threatening safety, stability, territorial integrity and sovereignty) against any Member States, all other Member States at request of this Member State shall immediately provide the latter with the necessary aid, including military.” In his statement, Pashinyan said the CSTO forces were being sent under the provisions of Article 4.

There is no indication that the popular unrest in Kazakhstan has any external origin – it began over fuel prices in the far west of the country before quickly spreading nationwide – but that is the line that Kazakhstan’s beleaguered authorities have been pushing. "Kazakhstan is facing armed aggression from terrorist groups trained outside of the country,” its Ministry of Foreign Affairs said in a statement early in the morning (local time) January 6.

This is the first time that the CSTO has agreed to deploy military forces to support an ally. It has refused requests on at least two other occasions: from Kyrgyzstan, during massive ethnic unrest in 2010; and from Armenia in 2021, as Azerbaijan pushed its post-war advantage by carrying out military incursions into Armenian territory.

In the latter case, the CSTO took three months to respond, and ultimately turned down the request.

“It needs to be understood that the CSTO can act only in the case of aggression or attack,” the CSTO’s Secretary General Stanislav Zas told journalists in August 2021. “But here we’re dealing with what is in essence a border incident.”

The CSTO was formed shortly after the collapse of the Soviet Union but has gradually been expanding its capabilities. It held its first joint peacekeeping exercise in 2012, and has carried out a variety of joint military exercises – most often under an “anti-terror” scenario – since then.

But it has often been accused of being a paper tiger because of its repeated failure to come to member states’ aid when they request it. It also has failed to engender much enthusiasm from the non-Russian member states, who mostly have seen it as a means of getting discounted Russian weaponry.

Why the Kazakhstan situation is the one that finally moved the CSTO to action is still unclear. But despite Pashinyan being the man to formally make the announcement, the decision was undoubtedly made in the Kremlin. Just hours before, however, the spokesman for Russian President Vladimir Putin, Dmitriy Peskov, said there would be no need for Russian assistance. “We are confident that our Kazakhstani friends can solve their internal problems by themselves,” he told the news agency RIA Novosti.

The peacekeeping forces are not the only military tool that the CSTO has in its kit. It could have chosen more forceful options, including rapid reaction forces. According to the CSTO’s official information, its peacekeeping forces total about 3,600 troops from the various member states (it does not break those down by country), and its mission is not combat but post-war tasks like ceasefire monitoring and deconfliction.

Whatever the mission, the prospect of external military intervention vexed many Kazakhstanis. “Tokayev called for the CSTO help - horrible decision!!” wrote Nargis Kassenova, a political scientist and senior fellow at Harvard, in a tweet. “We don't know what the situation with the Kaz military/security services is at the moment, what the level of confusion and the situation with loyalty are, but this appeal undermines his chance to gain legitimacy big time.”

Added Vyacheslav Abramov, the head of independent media outlet Vlast.kz: “An absolutely wrong decision, to call in the military of a neighboring country. It’s very difficult to imagine now the full consequences of this mistake.”

In Armenia, meanwhile, that it was Pashinyan who made the announcement was seen as a bitter irony, given the organization’s recent refusal to come to Armenians’ assistance. Under the prime minister’s initial announcement that he had spoken to Tokayev about his request, opposition leader Edmon Marukyan mockingly compared the situation to Armenia’s appeal last year, in which (under apparent Russian cajoling) Yerevan held off on making a formal request.

“I think we should wait for the written request according to the CSTO procedure,” Marukyan wrote in a comment that as of press time had garnered more than 4,000 likes.