Is the CSTO Preparing for Peacekeeping in Syria? 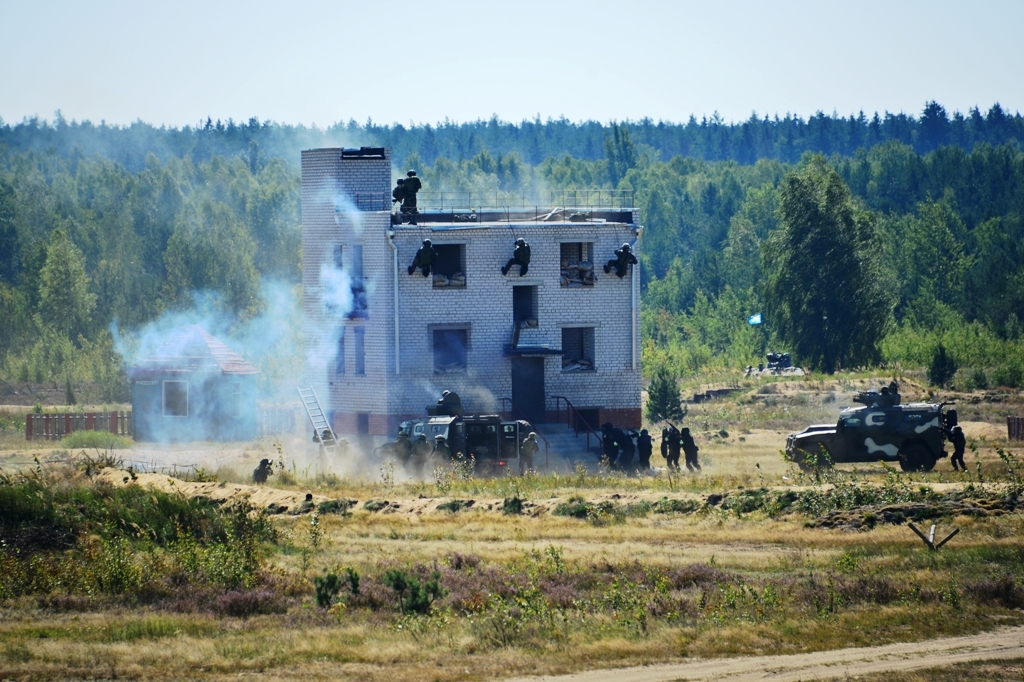 Russia's post-Soviet security bloc, the Collective Security Treaty Organization, has held discussions with the United Nations about taking part in UN peacekeeping missions, an effort analysts said was likely made with Syria in mind.

"We have agreed to prepare a roadmap on the involvement of CSTO peacekeepers in UN peacekeeping operations," said CSTO Secretary General Nikolay Bordyuzha last month in New York after meeting with UN officials there. The UN "has already proposed the steps that we need to take and there is quite an active dialogue going on," he said.

The CSTO has been developing a peacekeeping structure for years, and held its first peacekeeping exercise in Kazakhstan in 2012. (The CSTO includes Armenia, Belarus, Kazakhstan, Kyrgyzstan, and Tajikistan, in addition to Russia.)

Lately Bordyuzha has begun to talk more about taking part in UN peacekeeping missions, in particular. At the most recent CSTO peacekeeping exercises, in Belarus in August, the group drilled for the first time on a scenario that envisaged a UN-mandated peacekeeping operation.

This blog has been skeptical about the possibility of that happening, but Jaïr van der Lijn, a peacekeeping expert at the Stockholm International Peace Research Institute, says that it is in fact a real possibility. "At the UN, they would love to have some kind of cooperation like this with the CSTO," he told The Bug Pit in an interview. In recent years the UN has placed a greater emphasis on cooperating with regional blocs as it struggles to find enough soldiers to staff peacekeeping missions. The African Union, European Union, and NATO have all cooperated on UN peacekeeping operations in various capacities, and van der Lijn said he didn't see any obstacle to the CSTO doing something similar.

Van der Lijn noted that already two years ago the CSTO was discussing the possibility of deploying to UN peacekeeping missions in Africa. He discussed that with various officials in Moscow, and came away with the impression that it was largely "a public relations offensive by the CSTO."

The UN, meanwhile, was interested but skeptical of the CSTO"s willingness to carry through, van der Lijn said. He recalls UN officials asking for his assessment. "'So, what do you know about the efforts of the CSTO, we can't really figure it out. We've had some talks with them but it hasn't really moved forward? So what is really their intention?' -- that was the question I got." (The UN Department of Peacekeeping Operations did not respond to requests for comment from The Bug Pit.)

The development of the war in Syria, in which Russia has played an increasingly large role, has probably changed Moscow's calculation, van der Lijn said: "It wouldn't surprise me that once there is a peace agreement, or something to be done in Syria, that the government of Syria and the Russians would say 'we need to have Russian forces here to guarantee the security of the government.' And it could be the CSTO."

It would be one thing for Russia to deploy peacekeepers to Syria, as Russia now sees Syria (in contrast to Africa) as a key interest. Whether any of the other CSTO countries would go along, however, is an entirely different question. Belarusian President Aleksandr Lukashenko has categorically ruled out sending troops to fight anywhere abroad, and other CSTO members have been less vocal but have evinced little interest in getting involved with Russia's increasingly ambitious military endeavors.

The CSTO has, over the years, occasionally discussed deploying to Syria, but has usually done so by denying that it had any plans to do so. Last year, Bordyuzha was asked about the potential involvement of CSTO allies in Russia's operations in Syria, and he responded: "There is no need yet."

At the conclusion of August's peacekeeping exercises, Bordyuzha referred vaguely to the "world situation" which was heightening the military importance of the CSTO: "Political influence is the main instrument of the organization. But the way the [world] situation is developing suggests just the opposite: the increase in the role of the military component of the organization."

At a press conference in September Bordyuzha explicitly denied plans to deploy to Syria, though with some wiggle room: "To speak now about forming some sort of collective forces group and send it there [to Syria] for a fight with terrorism, simply doesn't make sense." The key word may be "now." Meanwhile, Bordyuzha is set to step down from his CSTO post this month in favor of an Armenian, with uncertain consequences for the group's priorities. Stay tuned.