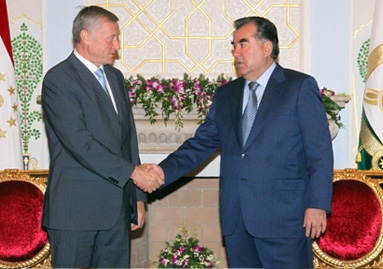 Russia's collective security organization is developing a plan for strengthening the border between Tajikistan and Afghanistan, to be presented at the group's summit next month in Sochi. The secretary general of the Collective Security Treaty Organization, Nikolay Bordyuzha, made the announcement after meeting with Tajikistan President Emomali Rahmon in Dushanbe.

The CSTO already discussed its intention to do this at an informal summit in May, and Bordyuzha didn't provide any details about the plan that's being worked out. It's safe to assume that Russia is pushing for the return of its troops to the border, as it has been doing pretty consistently for the past several years. And it apparently hopes that the veneer of multilateralism of the CSTO will help overcome the resistance that Tajikistan has been putting up for just as long.

It's worth revisiting one illuminating U.S. diplomatic cable from 2005 (when Rahmon was still Rahmonov):

Rahmonov said, “This constant propaganda in the Russian media about how Tajikistan is failing to control its borders now that the Russians have left - you know where that comes from? From the Russian generals who want to come back here with their mafia buddies. Look what they got here - they put in two-year tours, and then went back to Moscow and bought Mercedes 600s and elite apartments. You think they did that on their salaries? Why do you think the generals lined up in Moscow all the way across Red Square and paid enormous bribes to be assigned here - just so they could do their patriotic duty?”

“And another thing,” Rahmonov continued heatedly, “why do you think I got rid of the 50 Russian generals who used to be advisers in our Ministry of Defense. They never did anything for us. They never helped us build a professional military, never gave us any military-technical assistance, because they wanted to keep us weak so their buddies could play games and make fortunes dealing drugs. I got fed up, said thanks but now it’s time for you to go home. That’s one reason they eventually came up with the plot to overthrow me.”

A cynic (and it's almost impossible to be excessively cynical about Tajikistan's politics) would note that Rahmon here is mostly concerned about the Russians taking away his own business.

Anyway, Rahmon doesn't seem to have commented publicly on the CSTO border security plan, and one wonders whether this issue has become wrapped up in the ongoing negotiations over the new base deal between the two countries. The situation has changed since 2005, so maybe Rahmon is more willing to accept the return of Russian border guards. We should learn more in September.