Culture war moves to the top of Armenia’s political agenda

A series of controversies about sexuality have dominated the country’s political conversation in recent weeks. 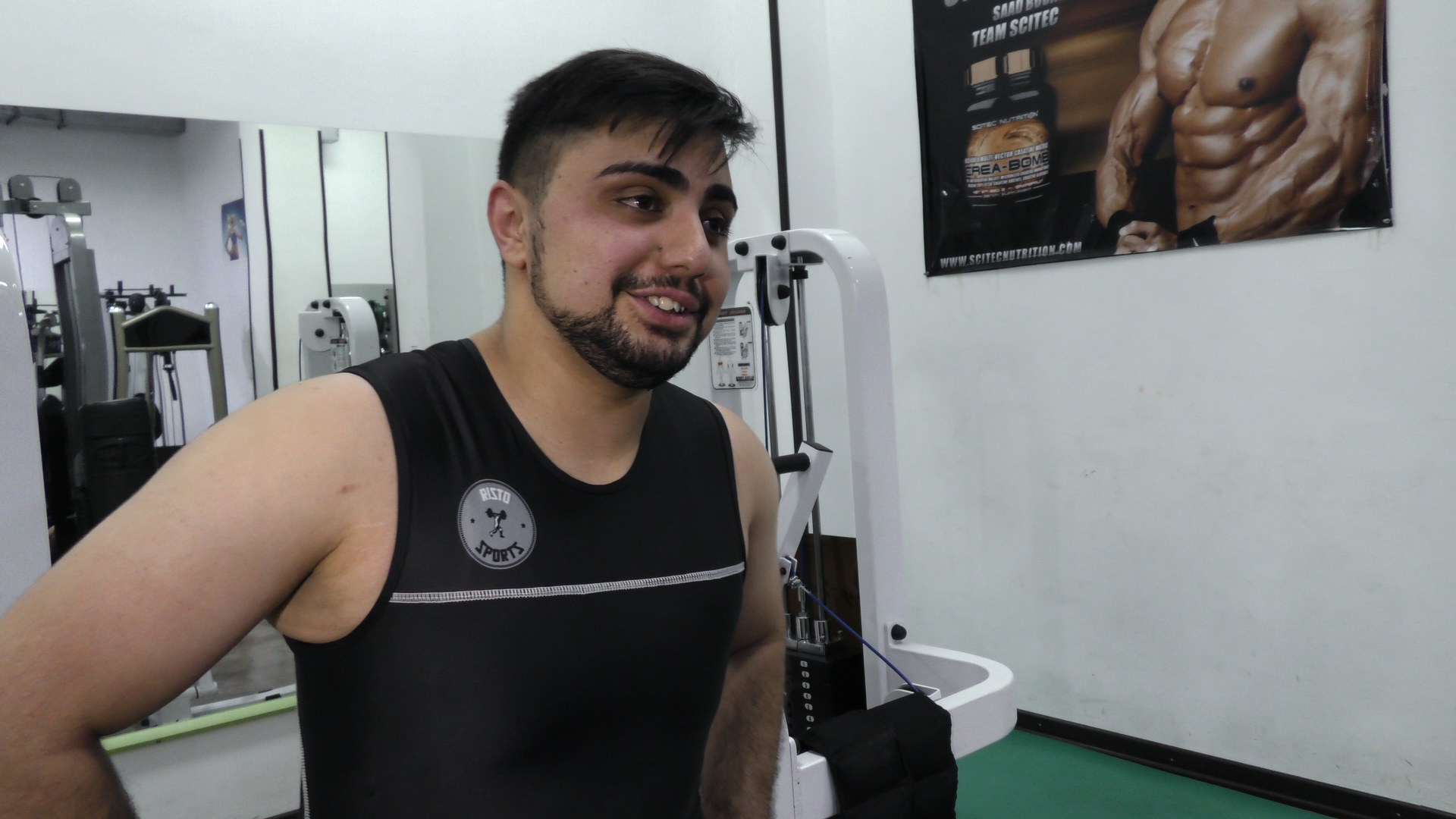 A still from an in-the-works documentary about a transgender Armenian weightlifter, Mel Daluzyan. (photo courtesy of Inna Sahakyan)

The issues include Armenia’s ratification of an international convention combatting domestic violence, an avant-garde public art project, and a documentary film about a transgender Armenian weightlifter. In all cases, the government is coming under attack from various conservative forces in the country, which have been manipulating the issues to portray the government as excessively liberal and acting contrary to Armenia’s traditional values.

The most volatile issue in the last two weeks has been over the documentary, which Armenian filmmaker Inna Sahakyan has been making about weightlifter Mel Daluzyan.

Daluzyan, formerly known as Meline, competed on Armenia’s women’s national weightlifting team for several years, winning a bronze medal in the 2006 world championships and representing Armenia in the 2012 summer Olympics. Daluzyan later came out as transgender and moved to the Netherlands.

In her fundraising efforts for the film, Sahakyan entered a competition for feature-length films organized by Armenia’s National Cinema Center, and won 20 million drams (about $42,000) toward the production.

The controversy over the film began with an October 23 article in ArmTimes, a news website owned by the family of Prime Minister Nikol Pashinyan. The article misrepresented the film, Sahakyan told Eurasianet. “It made it sound like all the money given to me comes from the state and that it’s only a movie about a sex change.” In fact, the film is about Daluzyan’s entire life, she said, and the Cinema Center is funded by the state but makes independent decisions about which works to fund.

Sahakyan also clarified that the money from the Cinema Center isn’t a grant – one of the sources of taxpayer consternation – but an investment, of sorts, and she will have to pay back 15 percent of the revenue that the film earns.

Although the interview was conducted in June, the story was released months later while Armenia was already in a national values debate centered around the Istanbul Convention, an international covenant requiring states to take action against domestic violence. The government had said it intended to ratify the convention, and social conservatives have been attacking, claiming that it would open the door to gay marriage and adoption in Armenia.

Following the ArmTimes article, the film was subjected to wide criticism. Davit Sahakyants told the anti-government 5th Channel that he had been making an animated film about the 4th-century King Varazdat. He had gotten funding from the government for the film in the past but had been rejected for another grant to finish it, he complained, and connected it to the institute’s ideology. He called the support of the Daluzyan film “directed toward making propaganda for these kinds of topics.” One pundit, Tigran Kocharyan, called the film “a desecration of the nation.”

Education Minister Arayik Harutyutyan defended the council’s decision. “As long as I am minister there won’t be any censorship in culture,” he told journalists on October 31.

Pashinyan gave a somewhat backhanded defense of the film, suggesting that the state only financed the part of the film about Daluzyan winning championships for Armenia. “If various countries in the world are financing 90 percent of that film, shouldn’t we finance it too? We are financing the part about our champion,” he said.

As this debate went on, yet another cultural controversy hit: an avant-garde art performance at Yerevan’s Republic Square metro station based on early 20th century Armenian poetry. Right-wing activists attacked the performers and the episode became one more hot topic on social media.

Eventually, the controversy over the documentary film would be used in the service of obfuscating another controversy: a doping scandal around Armenia’s national weightlifting program.

A 2018 journalistic investigation uncovered a wide-ranging doping program that Armenia conducted, with Russia’s help, that has subjected generations of weightlifters – including underaged athletes – to performance-enhancing drugs. As a result of the large number of Armenian weightlifters who have tested positive for doping, Armenia will have a greatly reduced squad in next year’s Tokyo games.

Daluzyan was one of the weightlifters involved in the program, and a positive test for Dehydrochloromethyltestosterone and Stanozolol resulted in a disqualification from the 2012 Olympics.

Though Daluzyan was only one of more than 20 Armenian weightlifters to be caught for doping, some have now tried to blame him exclusively for Armenia’s international punishment.

“Because of Daluzyan, Armenia has lost the chance to compete in the Olympics,” went one headline on the website Analitik.am, whose director is a member of the far-right Veto movement that has for several months been attacking various liberal targets, including LGBT Armenians and their advocates.

As of now, Armenia has not “lost the chance to compete in the Olympics,” but it will only be allowed to send two men and two women weightlifters. Further sanctions would drop that number to two athletes total.

The source for the article was Pashik Alaverdyan, the general secretary of the Armenian Weightlifting Federation. “Daluzyan spoiled the sweat of our athletes,” Alaverdyan told Analitik, sidestepping the fact that many other athletes had tested positive, some of them under his watch.

Alaverdyan has publicly supported the sanctioned weightlifters, save one. “I told [the International Olympic Committee] that she is dead, there is no person with the name of Meline Daluzyan anymore,” he told ArmTimes on November 11.

One Armenian who bought Aleverdyan’s story: Naira Zohrabyan, the chair of the Armenian parliament’s human rights committee and a member of the opposition Prosperous Armenia party. In a Facebook post she repeated the claims that Armenia’s Olympic punishment was Daluzyan’s fault, though she later edited it after commenters corrected her.

But she stuck to her opposition to the government’s support of the film.

The next day, another Prosperous Armenia MP, Gevorg Petrosyan, interrupted the regular agenda of parliament by suggesting a bill to ban gay marriage. Armenian law already defines marriage as being between a man and a woman, but Petrosyan was undeterred. "Would those voting against this initiative want to see this happen in their families?” he asked.

Speaker of parliament Ararat Mirzoyan, from Pashinyan’s My Step faction, watched Petrosyan fulminate along those lines, visibly agitated, before eventually erupting. “What are you talking about?” Mirzoyan shouted at Petrosyan. Various other My Step MPs lined up to criticize Petrosyan for trying to hijack the proceedings with a “fake agenda.”

Prosperous Armenia leader Gagik Tsarukyan, though, defended Petrosyan. “This is the Prosperous Armenia vision and he simply stated it,” he said. “For us it is simply unacceptable that homosexuals could adopt children.”

Eventually Pashinyan – who has been criticized even by his allies for his lack of decisiveness on controversial issues – made a strong statement in support of Daluzyan and the film about him.

"When she was a champion we were cheering and taking photos next to her and when she had a problem we write her off?” Pashinyan said in a November 13 session of parliament. “I didn’t know beforehand that the film was financed [by the state] but I’m very glad that it was, it would be immoral not to help this film be made.”

He sniped at the critics of the film, saying that they were connected to the former government and now are “deprived of the current dog bowl that they had been eating from.”

“This person is under my personal protection,” Pashinyan said of Daluzyan. “This person fled from Armenia but that was not enough to save himself.”