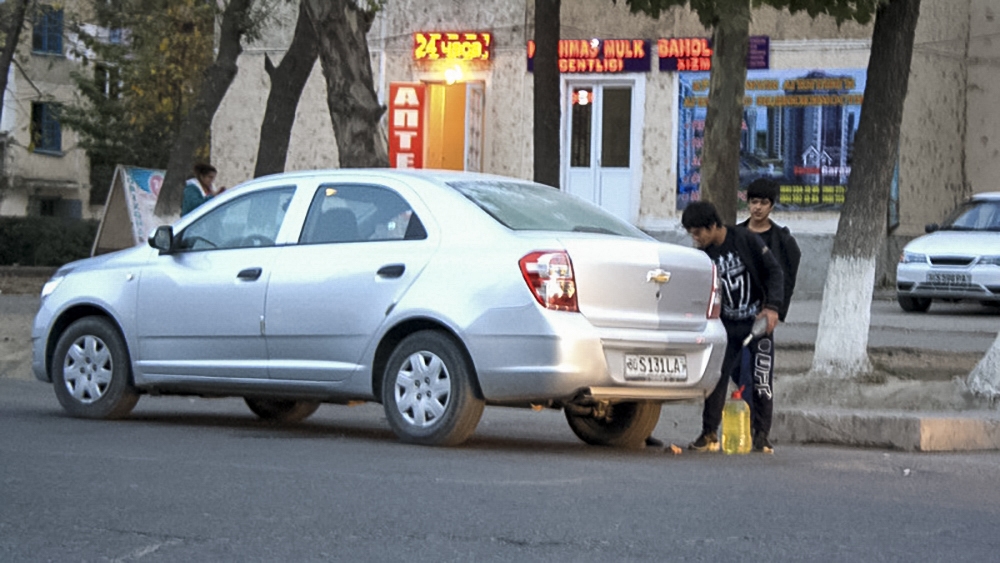 Hawkers by the side of roads selling gasoline

On the morning of November 15, motorists in Uzbekistan arrived at filling stations to find shockingly high new prices for their gasoline and diesel.

The unwelcome surprise is the talk of the town in the capital, Tashkent, and on social media.

Until October last year, gas price increases were typically only slight — a few cents at a time. The cycle of economic liberalization initiated in the wake of President Islam Karimov’s death, however, has injected volatility into a sensitive area of everyday life.

This latest development was not wholly unexpected. Rumors of an imminent hike earlier in November sparked a surge in demand, which in turn caused shortages and massive lines at filling stations. Such was the escalating public concern, that Uzbeknefteprodukt, the state-run company responsible for running the fuel retail market, appealed in a statement on November 11 for motorists not to “succumb to panic and the influence of unreliable rumors.”

In what now appears like an attempt to mislead the public, an Uzbeknefteprodukt representative at one point announced publicly that there were no plans for a price rise.

“You know that we need to have a basis for such a development. If the government issues a decree, then we can talk about a rise in prices. But so far these are just rumors,” the company representative was quoted as saying by Podrobno.uz.

But even as those reassurance were rolling in, state-run television station Uzbekistan-24 was reporting on how gas stations all across the country — in Bukhara, Samarkand, Andijan and Kashkadarya — were running short of supplies. One report showed hawkers by the side of roads selling gasoline at 4,000-5,500 sum per liter, considerably higher than the officially sanctioned rate. The overall tenor of the TV news coverage has leaned toward blaming speculators over the state-organized system of fuel distribution for current problems. At one stage, an Uzbekistan-24 report suggested in a leading manner that perhaps allowing gas stations to charge more might cause speculative middlemen to disappear.

Some motorists are pinning the blame on filling station operators, accusing them of exploiting the sudden shortfall in supplies.

“Where are these middlemen getting their gas? They can hardly be making it themselves?” Sanat Sadikov, a taxi driver in the Ferghana Valley town of Kokand, said.

But the owner of one gas station in the city of Karshi, in southern Uzbekistan, assured Eurasianet.org that the shortage was real, not artificially created.

“They only deliver four tons of gas per week from the fuel distribution center. That gets sold in two days, so we have to close for the remaining days,” the gas station owner, Hamro Riskulov, said. “We have to deal with these fuel deficit somehow. Just making it more expensive is not going to make more [fuel] appear.”

The government is taking belated, but wide-ranging action on this front. President Shavkat Mirziyoyev on November 16 ordered the Finance Ministry to extend an interest-free $250 million loan to two oil refineries to fund an increase in the import of crude oil. He also decreed that the import duties on crude hydrocarbons will be waived until January 1, 2020. In a measure intended to lighten the burden on motorists, Mirziyoyev also has ordered that excise taxes on the sale of gas will slashed by half.

In an ambitious attempt at regulating the market and squeezing out speculators, the government last October mandated that all gas should be sold at uniform prices at filling stations across the country. In the past, prices in filling stations located further from distribution facilities were higher, as transportation costs had to be factored in. Yet none of these efforts appears to have been especially successful in making the sector more predictable. The sight of small-time traders standing by the side of the road with repurposed water bottles and jerry cans full of fuel remain common.

Uzbeknefteprodukt is also part of the problem. The company operates in effect as a state monopoly as it is the only entity authorized to distribute fuel to retailers. Filling stations are not allowed to source their gas on the international market, and no foreign fuel companies are currently permitted to operate on the Uzbek market.

Economist Yuliy Yusupov, who has been a prolific commentator on the government’s economic reform agenda, said more liberalization would help mitigate the problem.

“What we need in this market is to bring in free pricing and competition. But what you have now is a centralized management and pricing system,” Yusupov told Eurasianet.org.

Economic affairs commentator Navruz Melibayev also pointed to activity on the currency exchange front as a cause for retail price volatility. In a big bang break with former practice, authorities in September allowed the Uzbek sum to trade freely at the market rate. As a result, the official rate of 4,210 sum to the dollar was permitted to drop to 8,100 overnight, which was close to the going rate on the black market used by most Uzbeks. That has hit companies like Uzbeknefteprodukt badly.

“Previously, Uzbeknefteprodukt bought oil, gasoline and other products at the preferential foreign exchange rate set by the Central Bank of Uzbekistan. Now the dollar rates are aligned and so the company has to import fuel at 8,100 sum to the dollar. That is what is causing the sharp jump in the price of gas,” Melibayev told Eurasianet.org.

“The prices we charge for fuel today do not cover the cost of buying the gas in the first place. I can say that we supply the population at a loss. The government covers our costs,” Isomov said.

Uzbek citizens are already bracing for the impact higher gas prices will have on the cost of transportation and, as a direct result, on their grocery bills.

“Without a doubt, retailers and producers will face higher transport bills and so they will pass the costs onto the end user,” Melibayev said.