Rahmon is object of a mounting personality cult. 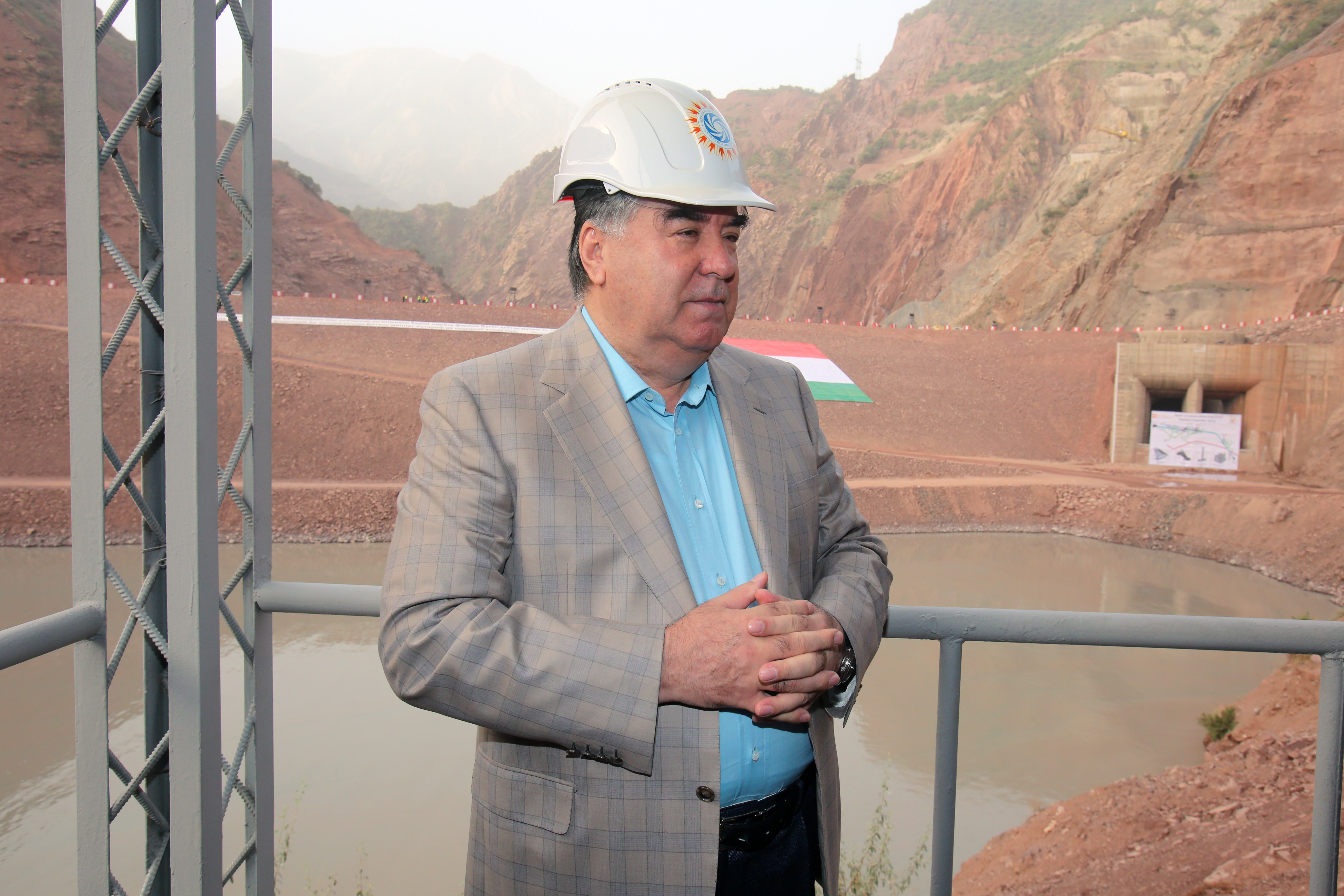 The head of a pro-government party in Tajikistan has struck another blow for sycophancy by suggesting that a major hydropower dam currently under construction be named after the nation’s president.

Asia-Plus reported on October 30 that Saidjafar Usmonzoda, leader of the Democratic Party of Tajikistan, has suggested that the structure now known mundanely as Roghun GES should be dedicated to Emomali Rahmon.

Usmonzoda’s argument is that it was, after all, Rahmon’s idea to revive a project that had been initiated in the 1970s, in Soviet times, but subsequently discontinued.

“In any case, it would more proper to use the words ‘he began construction,’ since that part of Roghun that was built in the Soviet Union was completely destroyed after the collapse of the union. And at Rahmon’s initiative, construction began almost from zero,” the member of parliament said.

In truth, Rahmon has had to overcome some major impediments to get the project off the ground. The idea of building the 335-meter dam was resisted strongly by the late Uzbek President Islam Karimov, who believe the structure would limit his own country’s access to water.

Heedless, Rahmon personally manned a bulldozer in October 2016 — one month after Karimov’s death, as it happens — to symbolically began the work on damming the Vakhsh River.

The rest of the work has been under the auspices of Italian construction giant Salini Impregilo, which is operating on a down-payment basis. The whole undertaking is going to cost some $4 billion to complete, but could hypothetically, if it is ever finished, generate up to $800 million annually in electricity sale revenues.

Still, if Rahmon pushed the rocks that began construction, it is long-suffering Tajiks that have had to do the heavy lifting.

In 2010, the government organized a massive public float of shares in the project. While a certain number of people were swept up in the all-consuming hype and invested in the shares, many others, including state workers and university students, were forced against their will into buying the stock. Despite those often crude measures, that effort raised the relatively paltry sum of $80 million. Another attempted float in 2016 failed to get off the ground altogether.

Last year, Tajikistan issued $500 million worth of bonds on the international market in their latest attempt to cover costs.

The first of six planned generating units at Roghun should be going into service from November 16. That date was apparently chosen because it marks President’s Day, a holiday invented to celebrate Rahmon. A second generating unit will go into operation from April, as plans currently stand.

If the past is any guide, the chances are that the proposal to name the hydropower plant after Rahmon is all but a certainty.

The 66-year-old is no shrinking violet.

Tajikistan already has a village called Rahmonobod. The parliament once voted to adopt a law designating the president the “Leader of the Nation, Founder of Peace and Unity” — an honorific that in effect endows him with lifelong powers.

Songs devoted to Rahmon play on the radio and television throughout the day. Posters and billboards carrying his image and sayings are dotted all across the country.

It is debatable whether Tajikistan’s presidential cult of personality is any more outsized than that on display in Turkmenistan or Kazakhstan though. The presence of Turkmenistan’s leader is utterly unavoidable in that country, but Kazakhstan’s Nursultan Nazarbayev may have the edge in terms of having things named after himself.

Last year, the international airport in Astana, Kazakhstan’s capital, was named after the president. There is even talk Astana itself could be named after Nazarbayev. In the business capital, Almaty, the smartest road and site of the city’s presidential residence, which common wisdom once had it would be re-dubbed only after Nazarbayev’s death, was rebranded ahead of time in another personality cult exercise.