Archived reports from July 2020 on how the pandemic has upended life in Central Asia and the South Caucasus. 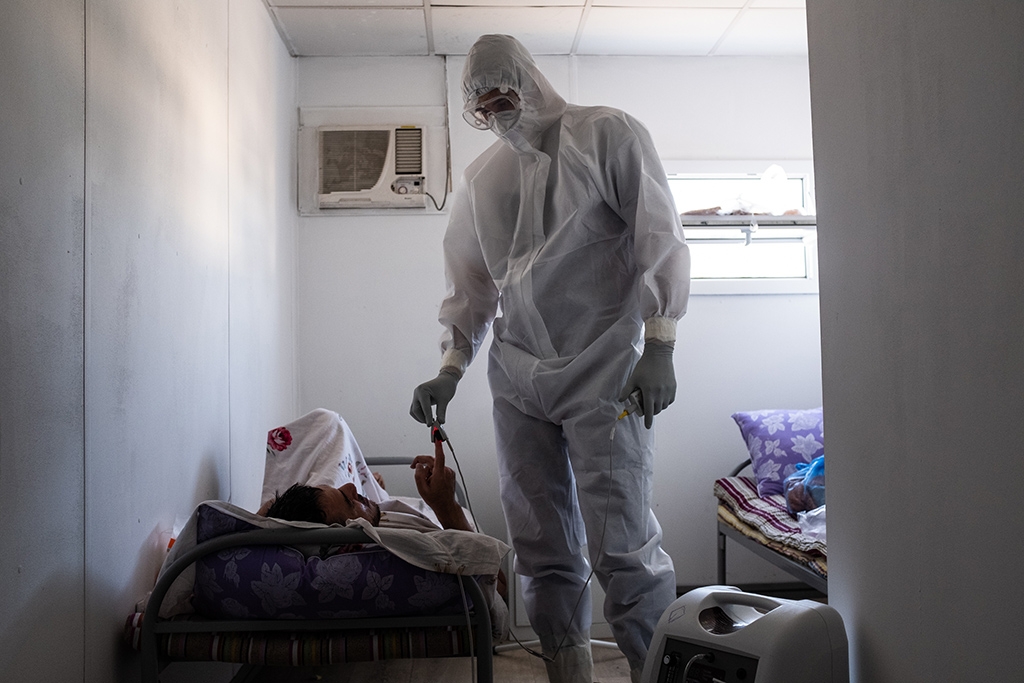 A doctor treats a COVID-19 patient in a room that once housed American troops at the Manas Air Base outside Bishkek, Kyrgyzstan. (photo: Danil Usmanov)

Cities in Azerbaijan are under strict, stay-at-home lockdown until at least July 20. As under a previous regime used in April and May, residents must now send a text message to the authorities any time they want to leave home, and can do so only under a limited set of circumstances, including visiting a doctor or shopping for food. But unlike the earlier quarantine in April, people over the age of 65 may also request permission to go outside. Most commercial services are closed. Baku residents are not allowed to leave the city.

Residents of Almaty wishing to sacrifice an animal to celebrate the upcoming Kurban Ait holiday will have to pay someone to do it for them and watch online. “Through this site, you can apply for a sacrifice ceremony without leaving your home," explained Supreme Mufti Nauryzbay kazhy Taganuly at the launch of qurban2020.muftyat.kz. "In the current pandemic, you will be able to make a sacrifice remotely, without any contact." Kurban Ait is known elsewhere in the Muslim world as Eid al-Adha, or the Feast of the Sacrifice, and marks Abraham’s willingness to sacrifice his son for God. This year it begins on July 31.

Remittances from Russia in the first half of 2020 decreased 15 percent year-on-year, the chairman of the National Bank said in a July 22 briefing short on details. Tajikistan’s economy is perilously reliant on remittances. In 2019, those payments amounted to around $2.5 billion, which is equivalent to around 33 percent of gross domestic product, or GDP.