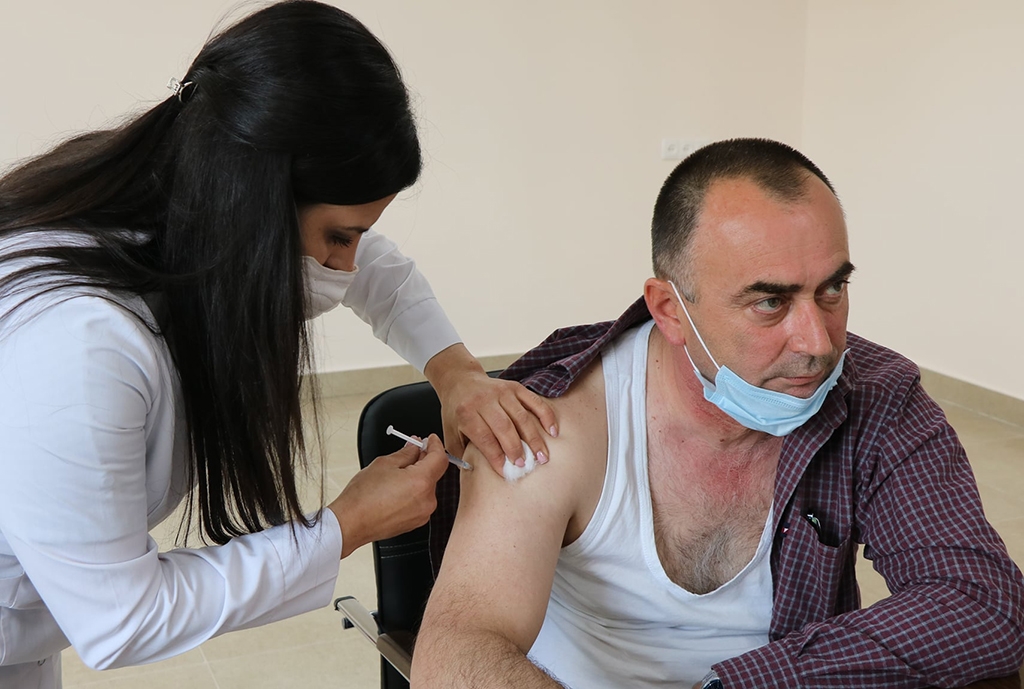 Who's eligible: Armenia has taken the rare step of offering the vaccine to anyone, including foreigners, without registration. On July 1, all adults became eligible. On July 15, new regulations made it harder for foreigners to receive vaccines on quick trips to Armenia after the country was deluged by Iranians seeking inoculations. About 3.6 percent of the vaccinated are foreigners, the Health Minister told a meeting of parliament on August 6.

Who's eligible: All adults.

What's available: Azerbaijan initially contracted with Beijing-based Sinovac for 4 million doses. It has also been promised 506,400 doses of the AstraZeneca vaccine from Covax; the first batch of 84,000 were delivered in April 4, the Health Ministry said.

The Delta variant has been detected in 31 people, local media reported on July 13.

Vaccine passport: The Cabinet of Ministers on July 26 announced that as of September 1, it would begin mandating vaccinations for government employees and university students. Moreover, adults without a vaccine passport will not be allowed to enter restaurants or shops. Many expect the new rules to drive a black market for fake vaccination passports.

For the second time, Georgia has climbed to the top of global charts for COVID-19 transmission rates relative to population size. Deaths are piling up amid a triple whammy of vaccine hesitancy, slow vaccination rollout, and the widespread neglect of mask mandates and other lockdown rules, we reported on August 13.

The prime minister is prioritizing economic growth over public health ahead of October elections, though he suggested on August 13 that vaccination may become mandatory in certain cases.

What's available: Several months ago, officials were assuring Georgians that they would not resort to Chinese jabs. Now they’re about the only thing available, we reported on July 8.

The government on July 1 introduced new rules requiring most people working in contact with the public – anywhere from government offices and stores to leisure facilities – to show evidence of vaccination before being allowed into their place of work. An employer cannot fire, but may suspend unvaccinated employees without pay, the labor minister said on July 13. Employees can continue to work if they pay for a PCR test every week.

Fake vaccine passports: Meanwhile, a thriving black market has developed for fake vaccination certificates, making it impossible to know how many people have been jabbed with the real thing.

Domestic vaccine controversy: Kazakhstan introduced a homegrown vaccine, QazVac, in April and said it was 96 percent effective months before third-stage clinical trials were completed. It has been dogged by controversy as local scientists say they want to see clinical data. Minister of Education and Science Askhat Aimagambetov defended the drug on June 11, saying that two international medical journals, which he refused to name, were reviewing studies on phases 1 and 2 of the clinical trials, Vlast.kz reported. Phase 3 will be finished in July.

How it's going: The country broke case records repeatedly throughout July. Infections in Almaty have tripled in three weeks. Most are the Delta variant.

Infections rose again rapidly in July, though the rate slowed toward the end of the month. Kyrgyzstan is expected to have the world’s highest COVID-19 mortality rate this summer, according to a June article in The Lancet.

What's available: On July 11, 1.25 million doses of Sinopharm arrived from China after two months of discussions about how to get them into the country. 150,000 were humanitarian aid; Bishkek bought the rest. Sinopharm is cheaper than Russia's Sputnik V, the Health Minister said on July 16, adding that Chinese officials asked that the price not be disclosed.

How's it going: The rate of vaccination picked up in mid-July after the Sinopharm doses arrived. The government on June 24 said it was investigating construction of two liquid oxygen plants.

Mandate: Bishkek has ordered all government employees get vaccinated, Kloop.kg reported on July 16.

The government on July 3 mandated vaccination for everyone over age 18. The virus is spreading quickly, though the country has struggled to procure and distribute enough shots for everyone. It's unclear how authorities will enforce the mandate.

The government's line: After months of insisting they had won the battle against COVID-19, authorities finally caved to reality on June 21, confirming the virus is again in the country.

How's it going: The government says little and few trust the official statistics. But the way the virus is sweeping through President Emomali Rahmon's family suggests no one is being spared. More than 10 of his close relatives have been hospitalized with coronavirus symptoms in recent weeks, Radio Ozodi reported on July 21; his sister died the day before.

Some residents of Gorno Badakhshan complain that they are unable to secure a second shot, Ozodi reported on August 6.

The government insists the country has never registered a single case of coronavirus. Yet it mandated that all adults over age 18 be vaccinated, reported the state newspaper Neutral Turkmenistan on July 7.

Cases are rising rapidly in the Mary province, Radio Azatlyk reported on August 9, and doctors say most infections are the Delta variant. Authorities are disinfecting the region by spraying chemicals from airplanes. In Lebap province, people who refuse vaccination are being fined and pensioners throated to have their payments withheld, Radio Azatlyk reported on August 9. A doctor in Lebap told Azatlyk on August 10 that hospitals are struggling to manage the surge in patients, which he said was worse than last year.

The government mandated vaccination for workers who interact with the public, as well as military personnel and government officials. On August 3, President Shavkat Mirziyoyev signed a law allowing an employee to be suspended for refusing vaccination.

Help from China: Uzbekistan is the only country in the region to extensively cooperate with China, beginning mass vaccination with the Anhui Zhifei Longcom jab (ZF-UZ-VAC2001) in March, despite a lack of third-stage clinical trials data. 10.5 million doses had arrived as of August 6.

What else is available: Three million doses of the Moderna vaccine arrived on July 30, a gift from the United States.

How it's going: A survey found 36.5 percent of Uzbeks refuse to be vaccinated, Kun.uz reported on August 5.