Vaccine uptake, the latest case surges, and related news from Central Asia and the South Caucasus. Updated every weekday. 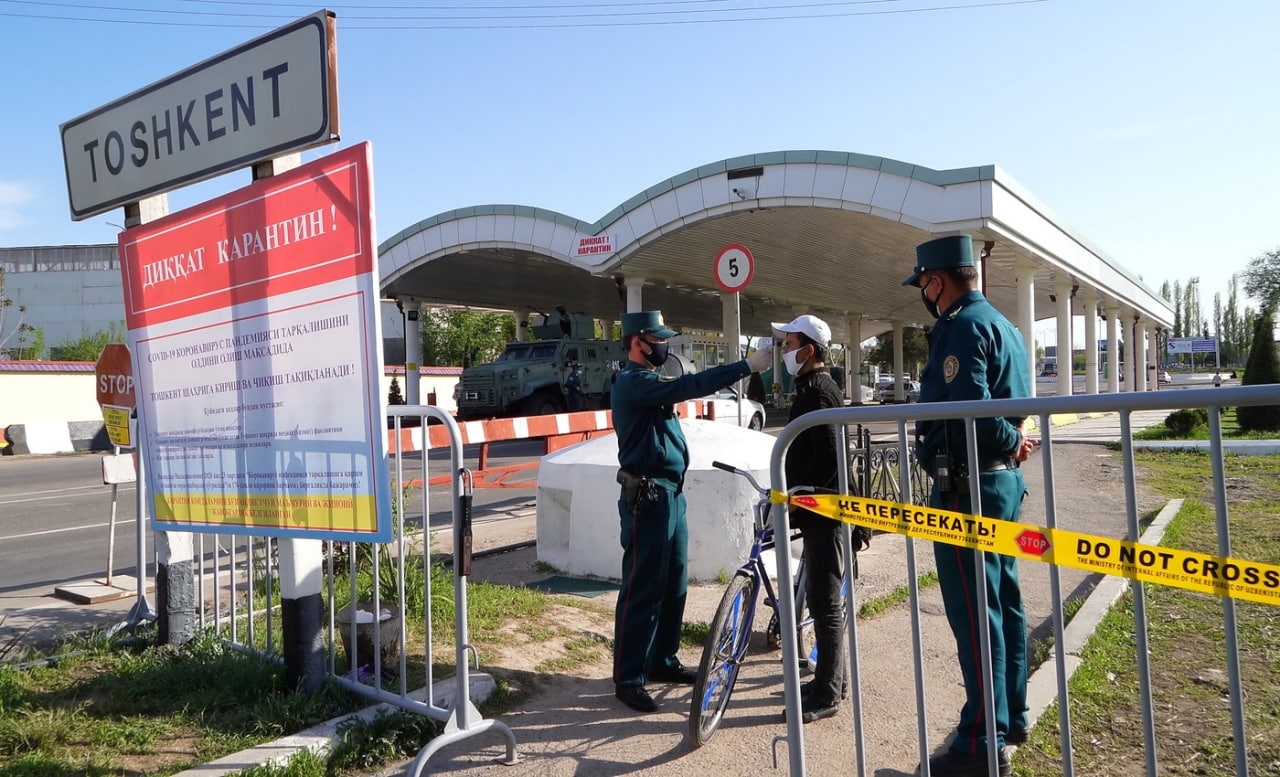 A checkpoint at the entrance to Tashkent (Uzbek Health Ministry)

Attitudes toward masks were revealed to the world during the Olympics opening ceremony in Tokyo on July 23, when the teams from Kyrgyzstan and Tajikistan paraded "mostly maskless," Reuters reported, "marking an awkward contrast with other national teams who covered their faces in line with COVID-19 protocols."

Who's eligible: Armenia has taken the rare step of offering the vaccine to anyone, including foreigners, without registration. On July 1, all adults became eligible. On July 15, new regulations made it harder for foreigners to receive vaccines on quick trips to Armenia after the country was deluged by Iranians seeking inoculations.

How it's going: Infections are rising again while the rate of vaccination has fallen from about 2,000 per day to 1,500 in recent weeks, said Gayane Sahakyan, the deputy director of the National Center for Disease Control and Prevention, on June 22.

Who's eligible: All adults.

The Delta variant has been detected in 31 people, local media reported on July 13.

Vaccine passport: The Cabinet of Ministers on July 26 announced that as of September 1, it would begin mandating vaccinations for government employees and university students. Moreover, adults without a vaccine passport will not be allowed to enter restaurants or shops. Many expect the new rules to drive a black market for fake vaccination passports.

What's available: Several months ago, officials were assuring Georgians that they would not resort to Chinese jabs. Now they’re about the only thing available, we reported on July 8.

The government on July 1 introduced new rules requiring most people working in contact with the public – anywhere from government offices and stores to leisure facilities – to show evidence of vaccination before being allowed into their place of work. An employer cannot fire, but may suspend unvaccinated employees without pay, the labor minister said on July 13. Employees can continue to work if they pay for a PCR test every week.

Fake vaccine passports: Meanwhile, a thriving black market has developed for fake vaccination certificates, making it impossible to know how many people have been jabbed with the real thing.

Domestic vaccine controversy: Kazakhstan introduced a homegrown vaccine, QazVac, in April and said it was 96 percent effective months before third-stage clinical trials were completed. It has been dogged by controversy as local scientists say they want to see clinical data. Minister of Education and Science Askhat Aimagambetov defended the drug on June 11, saying that two international medical journals, which he refused to name, were reviewing studies on phases 1 and 2 of the clinical trials, Vlast.kz reported. Phase 3 will be finished in July.

How it's going: The country has broken case records repeatedly throughout July. Infections in Almaty have tripled in three weeks. Most are the Delta variant.

Infections have been rising rapidly again in June and hospitals are running out of spaces. Kyrgyzstan is expected to have the world’s highest COVID-19 mortality rate this summer, according to a June article in The Lancet. Kyrgyzstan’s health minister on June 29 ordered all medical workers to be vaccinated, Kloop.kg reported.

The head of the State Committee on National Security, the KGB successor agency, said on July 8 that while the vaccine is free now, it might be available only for payment in the fall. He urged people to get vaccinated as soon as possible.

What's available: On July 11, 1.25 million doses of Sinopharm arrived from China after two months of discussions about how to get them into the country. 150,000 were humanitarian aid; Bishkek bought the rest. Sinopharm is cheaper than Russia's Sputnik V, the Health Minister said on July 16, adding that Chinese officials asked that the price not be disclosed.

How's it going: The rate of vaccination picked up in mid-July after the Sinopharm doses arrived. The government on June 24 said it was investigating construction of two liquid oxygen plants.

The government on July 3 mandated vaccination for everyone over age 18. The virus is spreading quickly, though the country has struggled to procure and distribute enough shots for everyone. It's unclear how authorities will enforce the mandate.

The government's line: After months of insisting they had won the battle against COVID-19, authorities finally caved to reality on June 21, confirming the virus is again in the country. The Health Ministry had been refusing to recognize cases, instead calling them "tuberculosis" or "seasonal pneumonia." In late May, a doctor was even fired for reporting a case.

How's it going: The government says little and few trust the official statistics. But the way the virus is sweeping through President Emomali Rahmon's family suggests no one is being spared. More than 10 of his close relatives have been hospitalized with coronavirus symptoms in recent weeks, Radio Ozodi reported on July 21; his sister died the day before.

The government insists the country has never registered a single case of coronavirus. Yet it mandated that all adults over age 18 be vaccinated, reported the state newspaper Neutral Turkmenistan on July 7. The report claims the country has a “necessary stockpile” of vaccines, but did not elaborate.

The government mandated vaccination for workers who interact with the public, as well as military personnel and government officials. "Compulsory vaccination against coronavirus has recently been widely introduced throughout the world," the July 17 Health Ministry announcement said. In the last days of July, the both houses of parliament approved a new law allowing someone to be fired for refusing vaccination.

Hospitals are running out of space as the Delta variant becomes the most common in Uzbekistan. The country has broken infection records repeatedly in July, though the government has consistently underreported infections and deaths throughout the crisis.

Help from China: Uzbekistan is the only country in the region to extensively cooperate with China, conducting third-phase trials of the Anhui Zhifei Longcom jab over the winter. 7.5 million doses had arrived as of July 20.

What else is available: Three million doses of the Moderna vaccine arrived on July 30, a gift from the United States.

Who's eligible: People over the age of 50 and university professors became eligible on June 22. Previously, in addition to people over age 65, writers, journalists and students studying abroad were able to get a shot.

How it's going: Since the start of the pandemic, police have recorded almost 1.2 million violations and issued over 1 million fines, Gazeta.uz reported on July 27.