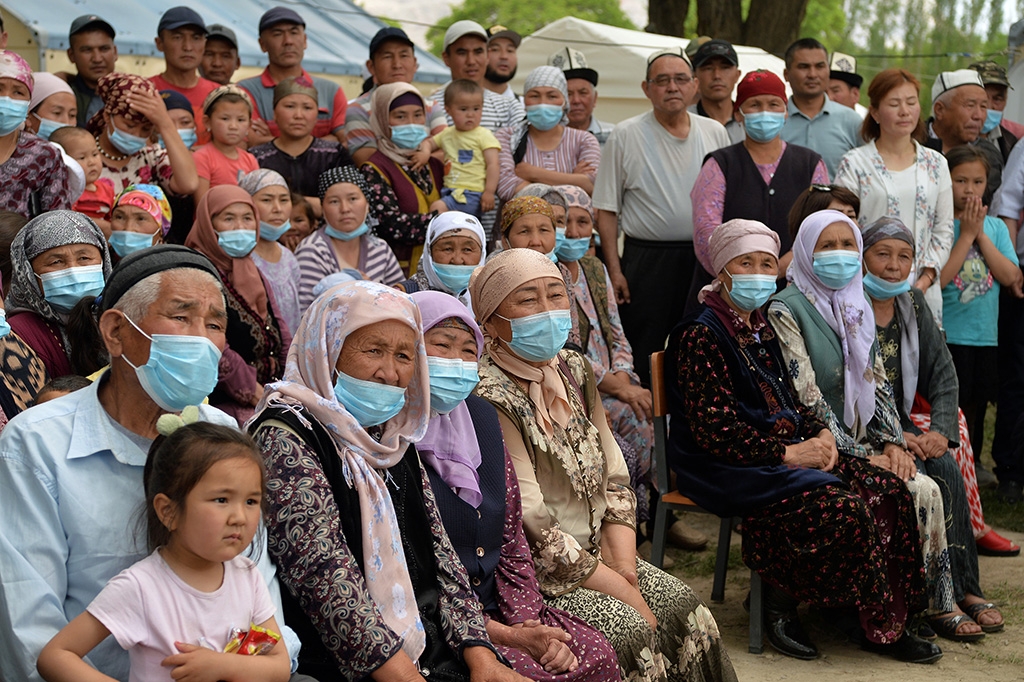 Who's eligible: Armenia has taken the rare step of offering the vaccine to anyone, including foreigners, without registration. But the number of takers is still low, our correspondent reported on May 13. The health ministry is not regularly releasing figures for the number of Armenians to have received shots.

How it's going: Infections are rising again while the rate of vaccination has fallen from about 2,000 per day to 1,500 in recent weeks, said Gayane Sahakyan, the deputy director of the National Center for Disease Control and Prevention, on June 22.

Who's eligible: Azerbaijanis over age 18 became eligible to receive a shot on May 10.

How it's going: A group of paramedics in Baku went on strike May 6, claiming they had received neither the supplemental pay they had been promised nor adequate personal protection equipment, Turan reported.

Vaccine passport: From June 10, Azerbaijan will require a vaccination passport for entry to gyms and recreational facilities such as pools, as well as mosques, which will reopen that day.

Domestic vaccine controversy: Kazakhstan introduced a homegrown vaccine, QazVac, on April 26, months before third-stage clinical trials are completed. Health Minister Alexei Tsoi received the shot on live television. (He received his second dose on May 17.) By the end of the year, officials say, country should be able to produce 500,000 doses per month. QazVac can be stored in a regular refrigerator and requires two doses three weeks apart. Limited information is fueling skepticism, though the government's website says “its complete safety has been proven.” On May 28, President Kassym-Jomart Tokayev told the head of the WHO about the vaccine. State media reported that Dr. Tedros Adhanom Ghebreyesus "pledged to consider including it in the list of medicines the WHO recommended for emergency use." After an Organization of Islamic Cooperation meeting on June 16, President Tokayev tweeted that he is ready to share the vaccine with other members as soon as it is approved by the WHO.

A group of Kazakh scientists are concerned about the dearth of information on QazVac, stressing that they cannot endorse the vaccine until the developers release clinical trial data, TengriNews reported on June 7. They also say they don't believe the developers' assertion that they have sent a study to The Lancet for peer review and are challenging claims that the vaccine is 96 percent effective. Nevertheless, on June 10 Kazakhstan's president said that he is ready to start exporting the domestic drug and pointed to the WHO head's interest. Minister of Education and Science Askhat Aimagambetov defended the drug on June 11, saying that two international medical journals, which he refused to name, were reviewing studies on phases 1 and 2 of the clinical trials, Vlast.kz reported. Phase 3 will be finished in July.

How it's going: At the current pace, Vlast.kz reported on May 24, the government’s goals will be met in July 2022, not this September as promised.

Vaccine passport: Kazakhstan is looking to a Russian-developed phone app to reopen after a year of mostly sporadic COVID-19 shutdowns. One health official said on May 13 that anybody who has received two shots of the vaccine will from July be exempt from all kinds of restrictions if they can show evidence via the Ashyq (Open) app. This waiver, which will free users from needing to undergo routine tests, will be valid for at least one year. Critics are concerned about privacy. The app crashed for a time on May 20, which authorities attributed to a surge in use. Up to 15,000 people can use Ashyq at the same time, authorities said.

Infections have been rising rapidly again in June and hospitals are running out of spaces. Kyrgyzstan is expected to have the world’s highest COVID-19 mortality rate this summer, according to a June article in The Lancet. Kyrgyzstan’s health minister on June 29 ordered all medical workers to be vaccinated, Kloop.kg reported.

What's available: Another 80,000 doses of Sputnik V, purchased by the Health Ministry, arrived on June 17 after the country ran out of jabs two weeks before. More shots are expected from China, though they have been chronically delayed since the Chinese foreign minister promised them on May 12.

Poison brew: Kyrgyzstan’s president alarmed health specialists by recommending coronavirus patients consume a brew made with a poisonous root, aconitum (or wolf's-bane). In a bid to quell the outcry over those remarks, the country’s health minister, Alymkadyr Beishenaliyev, gathered journalists for a press conference on April 16 and drank the concoction in front of them. The president's Facebook posts about the root were taken down that weekend; Facebook says it deleted the posts for spreading misinformation whereas the president's office said he had deleted the posts himself. Within days, several people were admitted to hospital for poisoning. Beishenaliyev has continued to insist the root has medical properties, despite frequent and growing calls for his dismissal. On May 31 he told a parliamentary committee that clinical trials conducted with up to 400 people in Kyrgyzstan had just shown aconitum improves immunity and clears phlegm from the lungs, Kloop.kg reported. He also said it can stop a stomach tumor from growing.

How's it going: Not well. The government on June 24 said it was investigating construction of two liquid oxygen plants.

Polls: An online (and thus not representative) poll of 3,100 Kyrgyzstanis conducted by the 24.kg news agency found 75 percent would accept the Sputnik V jab, 5 percent the AstraZeneca shot when it becomes available, and only 3 percent would consent to taking the Sinopharm vaccine. 17 percent said they would not be vaccinated, the website reported on April 26.

The government's line: After months of insisting they had won the battle against COVID-19, authorities finally caved to reality on June 21, confirming the virus is again in the country. The Health Ministry had been refusing to recognize cases, instead calling them "tuberculosis" or "seasonal pneumonia." In late May, a doctor was even fired for reporting a case. President Emomali Rahmon said in April that many other countries (he did not specify which) were studying Tajikistan's experience fighting the virus.

The government insists the country has never registered a single case of coronavirus.

What's reportedly available: Turkmenistan has received a “large” shipment of Sinovac shots, state media reported on May 10. It is unclear how many doses the shipment included, how they will be used, or if the state has approved the drug.

How it's going: Doctors say that salary cuts are forcing them to seek alternative employment and contemplate emigration, RFE/RL's Turkmen service, Radio Azatlyk, reported on May 14. Others complain they have not yet received the bonus promised them for working during the pandemic.

Infections have more than doubled in the last two weeks, Gazeta.uz reported on June 21. On June 23, authorities reported that the Delta ("Indian") strain was in the country.

Help from China: Uzbekistan is the only country in the region to extensively cooperate with China, conducting third-phase trials of the Anhui Zhifei Longcom jab over the winter. 6.5 million doses had arrived as of June 30. First Deputy Minister of Innovative Development Shahlo Turdikulova has said that she and her family were vaccinated with ZF-UZ-VAC 2001, which requires three shots over 28 days. On April 19, the Health Ministry announced the vaccine is effective against variants. The deputy health minister received the shot on May 3.

What else is available:

Who's eligible: People over the age of 50 and university professors became eligible on June 22. Previously,
in addition to people over age 65, writers, journalists and students studying abroad were able to get a shot.

How it's going: The government introduced new restrictions on accessing the capital from June 28 to July 12. Hours before the went into effect, Ozodlik reported, traffic jams many kilometers long were encircling the city.