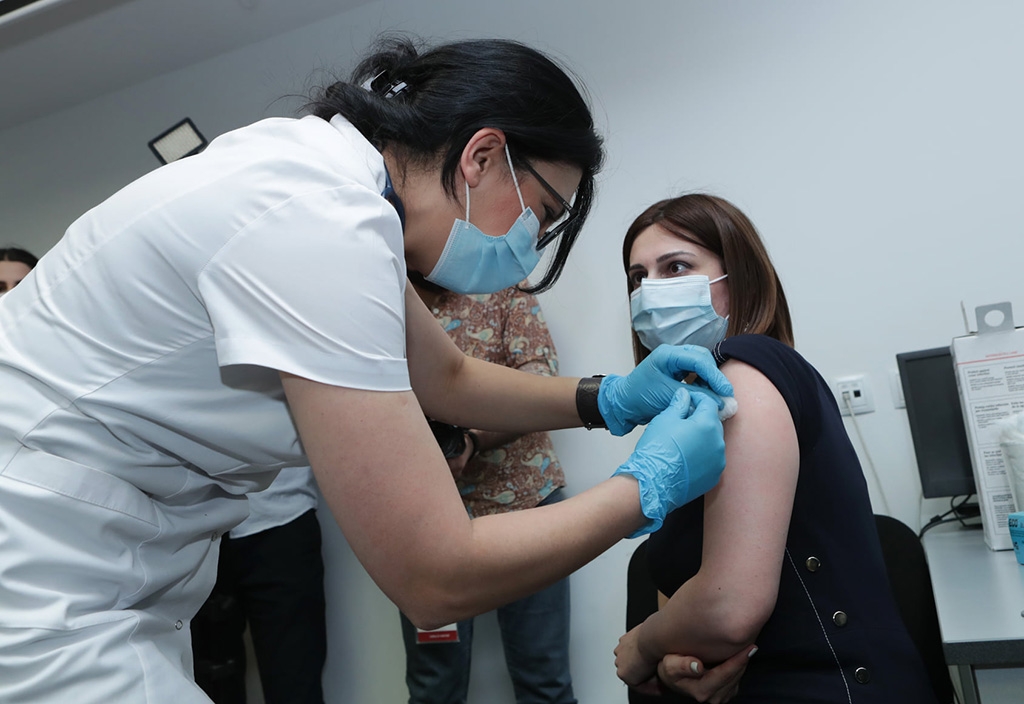 Who's eligible: Armenia has taken the rare step of offering the vaccine to anyone, including foreigners, without registration. But the number of takers is still low, our correspondent reported on May 13. The health ministry is not regularly releasing figures for the number of Armenians to have received shots.

What's available: Acting Deputy Prime Minister Tigran Avinyan and Acting Minister of Health Anahit Avanesyan both publicly received their first dose of the AstraZeneca vaccine on April 28 to allay qualms about the shot. The next day Avanesyan said that she was feeling good and hoped her example would be contagious. Another 50,000 AstraZeneca doses arrived on May 17.

Who's eligible: Azerbaijanis over age 18 became eligible to receive a shot on May 10.

How it's going: A group of paramedics in Baku went on strike May 6, claiming they had received neither the supplemental pay they had been promised nor adequate personal protection equipment, Turan reported.

Domestic vaccines: Kazakhstan introduced a homegrown vaccine, QazVac, on April 26, months before third-stage clinical trials are completed. Health Minister Alexei Tsoi received the shot on live television. (He received his second dose on May 17.) By the end of the year, officials say, country should be able to produce 500,000 doses per month. QazVac can be stored in a regular refrigerator and requires two doses three weeks apart. The results of third-stage clinical trials are expected in late July and the developers have been criticized for a lack of information on the shot. A May 6 RFE/RL article describes how limited information about the domestic vaccine is fueling skepticism. But the government's website says “its complete safety has been proven.” On May 28, President Kassym-Jomart Tokayev told the head of the WHO about the vaccine. State media reported that Dr. Tedros Adhanom Ghebreyesus "pledged to consider including it in the list of medicines the WHO recommended for emergency use."

How it's going: The rate of vaccination is falling, Vlast.kz reported on May 24. At the current pace, the government’s goals will be met in July 2022, not this September as promised.

What's available: Kyrgyzstan has plenty of Sinopharm doses, but demand is for Sputnik V. That was evidenced in the first few weeks of the campaign, when only the Sinopharm shot was available; 150,000 doses had been donated by China. Enthusiasm picked up when the Russian Sputnik V jab became available on April 23 to people age 65 and older. A batch of 20,000 doses arrived on April 22 and was quickly depleted. Another 20,000 doses of Sputnik V arrived on May 10 and ran out on May 24.

How it's going: Kyrgyzstan’s president alarmed health specialists by recommending coronavirus patients consume a brew made with a poison root, aconitum (or wolf's-bane). In a bid to quell the outcry over those remarks, the country’s health minister, Alymkadyr Beishenaliyev, gathered journalists for a press conference on April 16 and drank the concoction in front of them. The president's Facebook posts about the root were taken down that weekend; Facebook says it deleted the posts for spreading misinformation whereas the president's office said he had deleted the posts himself. Within days, several people were admitted to hospital for poisoning. Beishenaliyev has continued to insist the root has medical properties, despite frequent and growing calls for his dismissal. On May 31 he told a parliamentary committee that clinical trials conducted with up to 400 people in Kyrgyzstan had just shown aconitum improves immunity and clears phlegm from the lungs, Kloop.kg reported. He also said it can stop a stomach tumor from growing.

Polls: An online (and thus not representative) poll of 3,100 Kyrgyzstanis conducted by the 24.kg news agency found 75 percent would accept the Sputnik V jab, 5 percent the AstraZeneca shot when it becomes available, and only 3 percent would consent to taking the Sinopharm vaccine. 17 percent said they would not be vaccinated, the website reported on April 26.

The government's line: Officials have insisted since the start of 2021 that the country has registered no cases of coronavirus. Though cases appear to be washing through the country, doctors say they don't bother with tests because state-run labs always find them negative, we reported on May 26, a day after a doctor was fired for reporting a case. President Emomali Rahmon said in April that many other countries (he did not specify which) were studying Tajikistan's experience fighting the virus.

What's available: Vaccinations began on March 22 with 192,000 doses of the AstraZeneca vaccine made in India and received through the Covax program. Tajikistan expects to receive about 20 percent of the doses it needs through COVAX and will need to purchase the rest. “Negotiations are currently underway with China and Russia and I am confident that vaccines will be imported from these countries in the near future,” Ozodi on April 18 quoted a Health Ministry official as saying.

The government's line: Miraculously, the country has never registered a single case of coronavirus.

What's reportedly available: Turkmenistan has received a “large” shipment of Sinovac shots, state media reported on May 10. It is unclear how many doses the shipment included, how they will be used, or if the state has approved the drug.

How it's going: Doctors say that salary cuts are forcing them to seek alternative employment and contemplate emigration, RFE/RL's Turkmen service, Radio Azatlyk, reported on May 14. Others complain they have not yet received the bonus promised them for working during the pandemic.

Help from China: Uzbekistan is the only country in the region to extensively cooperate with China, conducting third-phase trials of the Anhui Zhifei Longcom jab over the winter. 3.5 million doses had arrived as of May 19. First Deputy Minister of Innovative Development Shahlo Turdikulova has said that she and her family were vaccinated with ZF-UZ-VAC 2001, which requires three shots over 28 days. On April 19, the Health Ministry announced the vaccine is effective against variants. The deputy health minister received the shot on May 3.

What else is available: Uzbekistan has received 100,000 doses of Sputnik V as of April 27, the government said. Distribution to people over age 65 began the next day. Prime Minister Abdulla Aripov asked his Russian counterpart to send more Sputnik V vaccines, Kun.uz reported on April 29.

Who's eligible: As of May 31, more people are eligible for vaccines. In addition to people over age 65, writers, journalists and students studying abroad may now get a shot.

How it's going: The head of an infectious disease hospital near Tashkent said the number of people under age 45 who are contracting COVID-19 has doubled recently, Ozodlik reported on May 3. He blamed the lack of masks.