With the president blaming journalists, an impartial investigation into the violence appears unlikely. 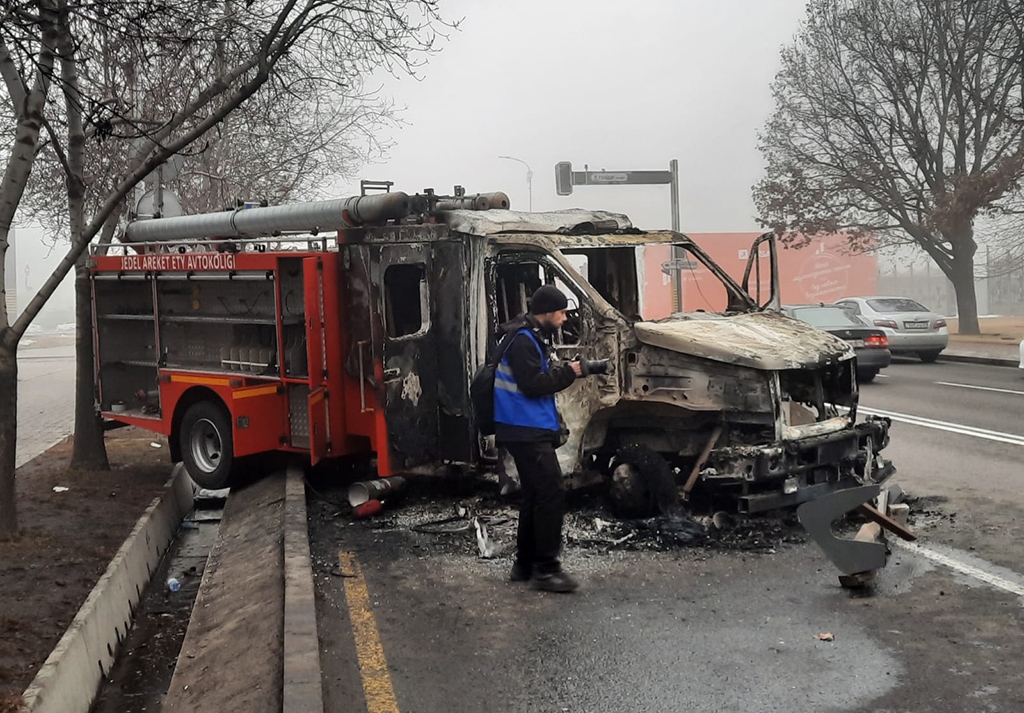 As last week’s unrest unfolded, authorities in Kazakhstan unplugged the internet, keeping the world in the dark about much of what was going on.

Journalists on the ground were nevertheless working to gather information, often at a grave risk to their safety from the armed mobs, as well as from the authorities.

On January 6, a cameraman for Almaty TV, a state-owned broadcaster based in Kazakhstan’s commercial capital, was struck in the arm by gunfire. His driver, Muratkhan Bazarbayev, was killed after being hit in the same hail of bullets.

“I had worked with Muratkhan agha for two years. I remember him as a very upstanding person, very responsible and alert. He would offer his help whenever he could,” an Almaty TV colleague, Rinat Rysaldiyev, said.

It is not known who fired the gunshots.

One day earlier, during the storming of the Almaty city hall by a large crowd of highly aggressive men, multiple journalists came under assault from people within the mob.

“During the storming of the city hall, some of the protesters agreed to be filmed. But others, people with sticks, were against it. They grabbed cameras from a few journalists and they forced some to delete their images,” said Chris Rickleton, a Eurasianet contributor who works as the Central Asia correspondent for French news agency AFP. “They tried to grab my equipment and that of our video operator too.”

Some injuries were incurred as a result of efforts by riot police to disperse crowds.

Around lunchtime on January 5, journalists for the website Orda.kz came under fire from rubber bullets and flash grenades. Bek Baytas was struck in the face by a fragment from a stun grenade, while Leonid Rasskazov was hit by a rubber bullet, according to first-hand accounts from other reporters.

Sergei Alekseenok, a photo correspondent for Press.kz, said individuals from both sides of the barricades were impeding the work of journalists.

“On January 5, while taking shots of what was happening on Tole Bi street [in Almaty], there were some armed demonstrators, as soon as they saw the cameras and the press sign [on my vest], they started making threats and telling me to get out of there. Otherwise, they said they would smash my camera,” Alekseenok told Eurasianet.

On January 7 and the day after that, when Alekseenok was taking pictures at a nearby location, on Astana Square, it was soldiers who prevented him from doing his work.

Dmitry Tikhonov, a veteran journalist who was monitoring events for the Kazakhstan International Bureau for Human Rights and Rule of Law, or KIBHR, was confronted by an aggressive drunk man while trying to capture images of a column of protesters.

“While I was trying to reason with him and explain to him that I was not a law enforcement officer, a dozen young people attacked me. At the same moment, another section of the protesters tried to protect me, explaining to the attackers that I was a journalist,” he said.

A pair of Russian journalists, Dozhd TV correspondent Vasily Polonsky and a freelancer for The Insider, Vasily Krestyaninov, say they were shot at by men in unmarked uniforms on January 8. The pair told Eurasianet that the incident occurred as they were trying to film the arrest of a man caught clambering over a fence surrounding the city morgue.

Adil Soz, a media freedoms organization, has been keeping tabs on the arrests of reporters all around Kazakhstan.

Lukpan Akhmedyarov, a journalist from the city of Uralsk, was among several across the country to have been punished for their presence at rallies. On January 7, he was sentenced to 10 days in jail on charges of participation in an unauthorized gathering.

“He got up on a rostrum [during a rally on January 4] and urged people not to succumb to provocations and he tried to calm down a small group of aggressive people,” his colleague, Raul Uporov, told Eurasianet.

In another city, Ust-Kamenogorsk, the chief editor of local news website Altai News, Daryn Nursapak, was likewise on January 9 sentenced to two weeks in jail for unlawful participation in a rally that he filmed for a Facebook live stream.

Makhambet Abzhan, an independent journalist who covered protests in Nur-Sultan, has not been heard from since January 5, according to media reports. Police in the city told Vlast news website on January 11 that the citizen journalist had not been detained by them. On January 5, Abzhan wrote on his Telegram account that police officers had come to his apartment and that he was refusing to comply with their requests to open the door.

With the number of detentions increasing daily – up to 12,000 by January 11 – there are mounting calls for Kazakhstan to open the way for an impartial investigation into events. But remarks by President Kassym-Jomart Tokayev, who has laid part of the blame for the disturbances on “so-called free media,” suggest that the government does not see journalists as having a role in that process.

Amnesty International has called on Kazakhstan to release all journalists and activists detained in connection with the protests.

“While the situation appears to have calmed down in Kazakhstan, the crisis is far from over,” Marie Struthers, Amnesty International’s director for Eastern Europe and Central Asia, said in a statement. “Nothing is more important now than free access to independent information, full accountability for what has happened and a commitment to respect human rights moving forward.”