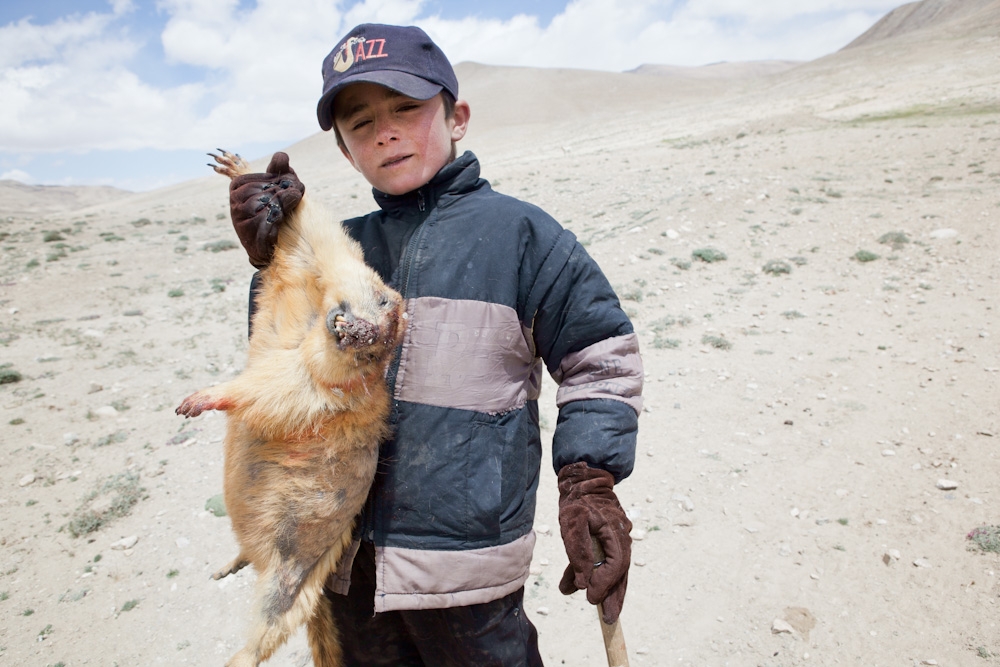 A boy tries to sell a dead marmot in Tajikistan. Marmots are often hunted for their meat in mountainous parts of Central Asia. But in Kyrgyzstan, health officials suspect a teenager died from bubonic plague after coming into contact with a flea that had lived on a marmot. (David Trilling)

Kyrgyzstan’s Health Ministry has confirmed the death of a teenager from bubonic plague, an infectious disease most famously known as the Black Death that killed approximately one-third of Europe’s population in the 14th century. On August 26 the ministry said an autopsy on 15-year-old Temirbek Isakunov had confirmed the boy had contracted the disease. Isakunov died in Issyk-Kul province on August 22 after being admitted to a hospital with a high fever and swollen lymph nodes in his armpits and on his neck. Doctors suspect Isakunov contracted the disease from a flea living on a marmot that his family had cooked. Marmots are common in Central Asia's mountains and are sometimes hunted for their meat. Kloop.kg quoted Health Minister Dinara Saginbaeva saying at a press conference this morning that the teenager had been buried and 105 people who could have been in contact with him during his last days are being given antibiotics. The Ministry of Emergency Situations says that more than 700 people in Issyk-Kul province have been examined for symptoms, the 24.kg news agency reports. Though the disease conjures images from the Middle Ages – bodies pilling up in the streets and mass hysteria – it is not uncommon. And today it is treatable. The Centers for Disease Control and Prevention, a US government agency, notes that 1,000 to 2,000 cases are reported worldwide each year. Modern antibiotics reduce mortality rates from 50-60 percent to 8-10 percent, the CDC says. Moreover, bubonic plague, which often spreads by fleabites, is not as dangerous as other forms of the disease, such as airborne pneumonic plague.  But the ability for Kyrgyzstan’s dilapidated health sector to handle any outbreak is questionable. In 2011, the International Crisis Group reported that Kyrgyzstan’s health system is “on its last legs” and warned that the country did not have the capacity to handle an acute epidemic. Basic medicines, the report said, were in short supply. Ironically, it was Lake Issyk-Kul where some historians believe the Black Death started in the 14th century, before being carried along the Silk Road by traders and Mongol raiders to Crimea and onward, via a Genoese colony there, to Europe. Even if the disease is quickly contained, the news of the death is more bad news for Kyrgyzstan’s ailing tourism industry, especially as it comes smack in the middle of the high season. Lake Issyk-Kul is arguably the country’s biggest tourist magnet and the lakeside industry was already hurt this year by riots in the province, which are said to have frightened would-be visitors.