Following the 38-year-old’s death by shooting, a large number of inexplicable circumstances surrounding his career and last days came to light. 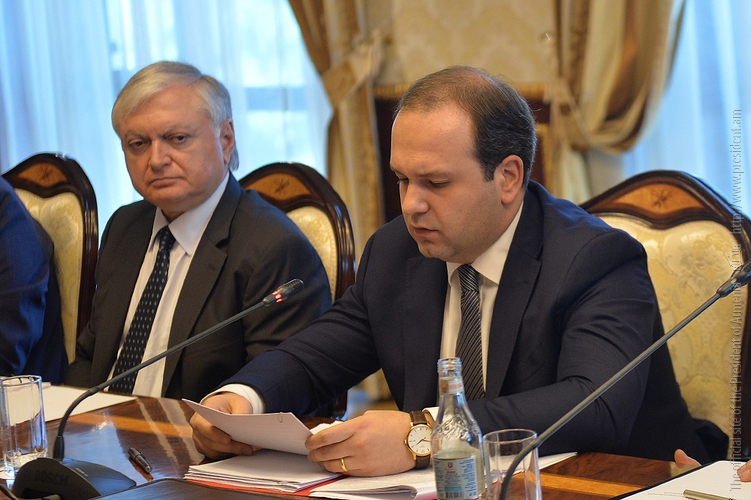 Georgi Kutoyan, then director of the National Security Service, at a 2017 meeting of Armenia's national security council. Kutoyan was found dead of a gunshot wound on January 17, 2020. (photo: president.am)

Georgi Kutoyan was 38 and had worked in the administration of former president Serzh Sargsyan before being appointed director of the NSS in 2016. He was replaced by Nikol Pashinyan shortly after the latter became prime minister in 2018.

Kutoyan’s body was discovered on January 17 in his Yerevan apartment with a gunshot wound in his temple. There also was evidence of dozens of shots fired in the apartment, with shells and bullets scattered about.

General prosecutor Arthur Davtyan told journalists during Kutoyan’s wake that no signs of struggle were found. “Enough data has been obtained at this time. It indicates suicide,” he said. He said a criminal case had been opened into the incident related to a crime against driving someone to commit suicide, but the authorities have given no indication as to who might have driven Kutoyan to kill himself. “All versions will be thoroughly investigated,” Davtyan said.

But many circumstances surrounding the death raised further questions.

Another official, Artur Melikyan, Head of the General Investigation Committee of the Investigative Committee, told reporters that the death could have been “a homicide disguised as a suicide.”

Kutoyan, who was studying law at the University of Cambridge during this school year, had returned from the UK to Armenia for the holidays. The investigative committee also found that during December, Kutoyan had fired 35 shots into the walls of the apartment using a pistol.

But neighbors told journalists that they did not hear gunshots or anything out of the ordinary.

More fuel was added to the speculations when it emerged that someone using the username “Georgi Kutoyan” had tried to edit an Armenian-language Wikipedia page about Kutoyan in the weeks before his death. On January 3, and then on January 16, the user had attempted to delete the biography section on the page, but both times it was restored by another editor.

Following Kutoyan’s death, Sargsyan issued a statement saying he was “deeply shocked” and praising Kutoyan as a “high-quality professional” and “decent” man. “The process of investigating what happened to Georgi Kutoyan, given his former position in the state, should be taken under close public attention,” Sargsyan said.

Pashinyan also issued a statement vowing to get to the bottom of the case. “The Prime Minister of Armenia is sorry for the death of every citizen and expresses his condolences to every mourning family,” read the statement, issued to local media outlets. “He also promises that the government will do everything in its power to fully bring to light the circumstances of Georgi Kutoyan's death."

When Kutoyan left the NSS, Pashinyan complained that sensitive documents from the service had gone missing. Later, Kutoyan’s successor, Artur Vanetsyan, further claimed that the missing documents in question related to the events of March 1, 2008, when protests against Sargsyan’s election were violently broken up, resulting in 10 deaths. Following Kutoyan’s death, political analyst Levon Shirinyan suggested there may have been a connection. Kutoyan “was a living carrier of information,” he told the Pashinyan family-run newspaper Armtimes. (Kutoyan was never investigated about the missing documents or anything else.)

Kutoyan is the second former senior security official to have been found dead of gunshot wounds in the last four months. Former police chief Hayk Harutyunyan was found dead in his country house in September. Harutyunyan had been interrogated in relation to the March 1 events.

Adding still further intrigue to the story, Hrair Tovmasyan, the chair of the constitutional court who has become one of the main targets of Pashinyan’s government, was filmed outside Kutoyan’s apartment following the latter’s death, his body racked with sobs. Local media reported the two men were friends.