A dispute over judges, as well as its waning popularity, has exposed a rift in the Georgian Dream party. 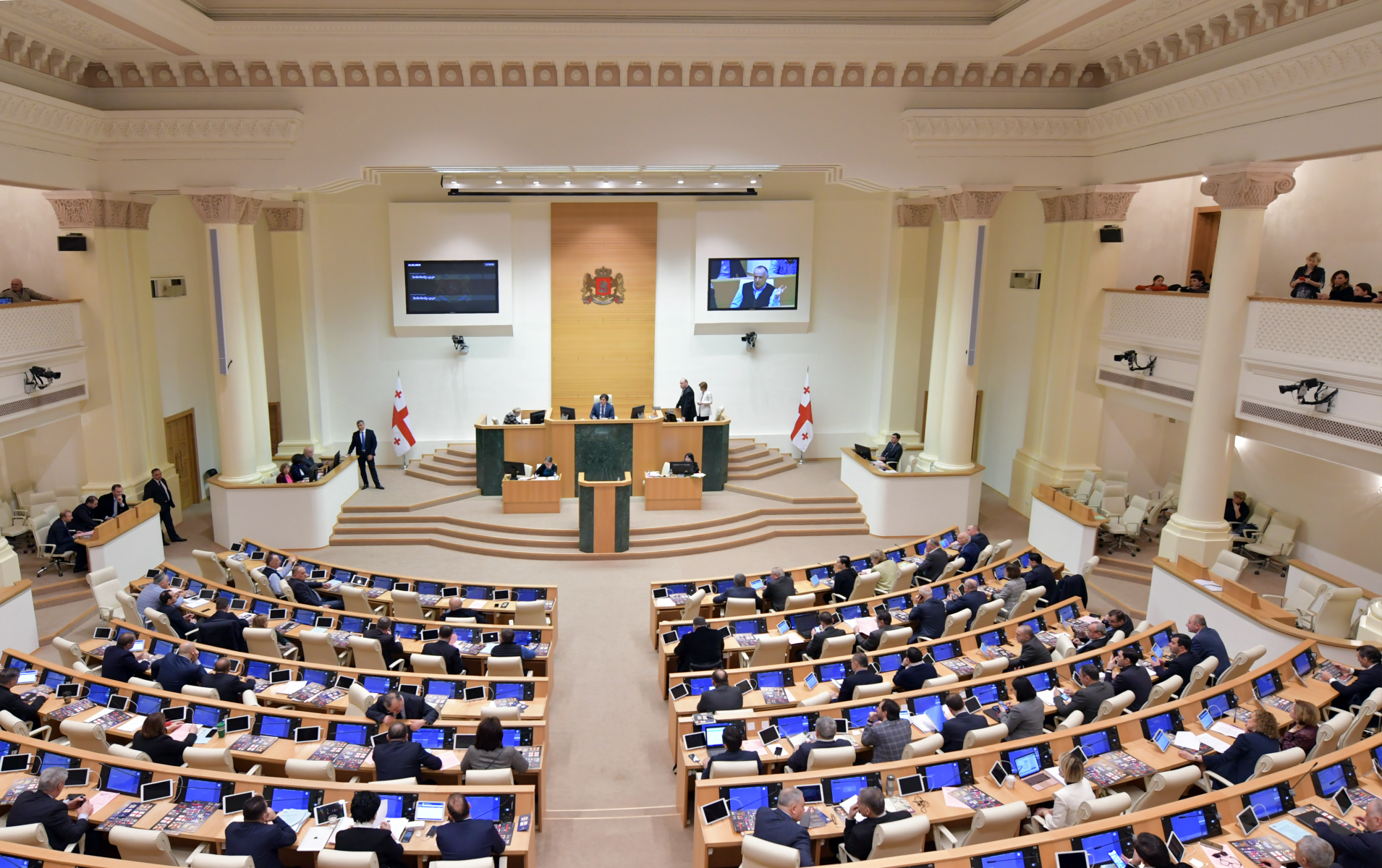 A February 21 session of the Georgian parliament in which a controversial bill about judicial appointments was discussed. Subsequently, four members of the ruling party have left, casting the future of the party into doubt. (photo: parliament.ge)

A series of defections from the ruling Georgian Dream party has left the party without the dominant majority it held in parliament and has exposed a growing fault line in the party ahead of elections next year.

Over the last several days, four GD members of parliament have announced, one by one, that they are leaving the party. The defections have reduced the party’s representation in parliament to below the two-thirds majority they once enjoyed, which allowed them to pass constitutional amendments without any other representatives’ support.

The defections also have added to a sense that the GD, which has governed Georgia since 2012, is increasingly fragile. The party’s candidate in presidential elections last year, Salome Zourabichvili, won by a much tighter-than-expected margin.

The immediate cause of the schism was a controversy over judicial appointments, which has split the party between an old guard that is more sharply opposed to the former ruling United National Movement of Mikheil Saakashvili, and newer members that are more willing to accommodate figures associated with the former regime. The defectors are part of the old guard and see the judges in question as being too closely connected with the UNM.

“We are witnessing the process of Georgian Dream’s UNMization at personal level and ideological levels,” said one of the departing MPs, Gedevan Popkhadze, at a February 25 press conference. “The GD said it is acceptable to have [among its ranks] the prosecutors, judges and public officials who served under the United National Movement.”

That echoed the sentiment of another of the defectors, Eka Beselia, who announced her departure three days earlier.

“Emotionally, it is very difficult to say that I am leaving the political party that I have established together with Bidzina Ivanishvili,” Beselia said, the news website Civil.ge reported. Ivanishvili is the billionaire chairman of the GD and widely seen as the man operating the government from behind the scenes. “[But] GD has distanced from the ideals of October 1, 2012 elections; we have developed differences in terms of our values and our efforts in the last two years to free [the Georgian Dream] from remnants of the United National Movement have failed.”

Earlier this month, as Beselia was publicly bucking the party on the judicial appointments, a sex tape of her was leaked, part of a trend of targeting female politicians who fall out with the authorities.

“The party’s ‘old guard,’ those individuals who actively supported Georgian Dream in its struggle against UNM in 2011 and 2012, is flatly opposing the core figures in the court system, whom they blame for conforming with [the] Saakashvili government during his tenure,” the news site Democracy and Freedom Watch wrote in an analysis. The new guard consists of roughly a dozen young members, including the speaker of parliament and other key figures, who “enjoy unequivocal backing from Bidzina Ivanishvili, the country’s strongman.”

The judicial appointment issue was not the only bone of contention. One of the defectors, Beka Natsvlishvili, announced his departure after a pension reform bill – which would have shifted the country’s retirement savings system from a largely private one to a more state-run one – failed. Natsvlishvili said the failure of the bill made the ideological differences between him and the party “apparent,” Civil.ge reported.

The defections were not unexpected in light of the GD’s dimming prospects in the 2020 elections, said Kornely Kakachia, the head of the Tbilisi-based think tank Georgian Institute of Politics. It is an “unwritten rule” that Georgian voters don’t support the same party in more than two consecutive elections, he told Eurasianet. “Understanding this, and plagued by internal infighting, GD started a slow disintegration. After the last presidential election it became clear that GD and Ivanishvili may not win in 2020.”

The judiciary issue, he said, “is just a pretext for the old guard to leave GD in a face-saving way,” Kakachia said.

The GD was never an ideologically cohesive party, but came together as a coalition of forces who wanted to defeat Saakashvili and the UNM. "Slowly, and with characteristic noise, political groupings’ alignment in Georgia continues to adjust to a logical ideological frame," wrote George Khelashvili, an analyst and former senior government official, on Twitter.

The GD remainers themselves tried to put a brave face on the situation. “The ongoing process is part of democracy,” Georgian Prime Minister Mamuka Bakhtadze told reporters on February 26. “The Georgian Dream party has fought for democratic values and the diversity [of views] is one of the biggest gains of the fight.”

But Kakachia said he wasn’t convinced. “This may be the beginning of the end of the GD,” he said.