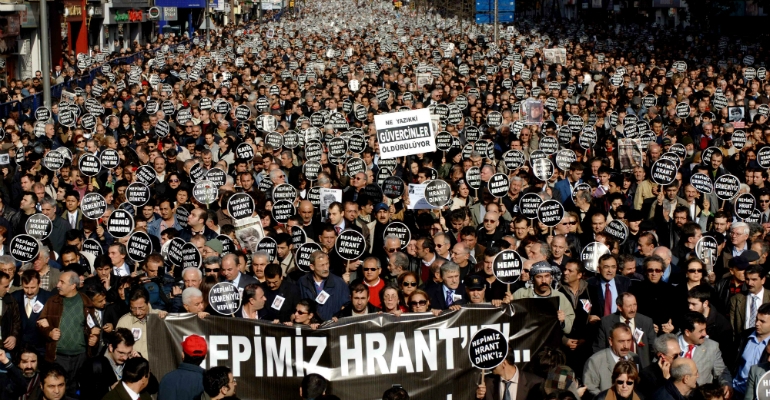 A demonstration in Istanbul after the 2007 murder of Hrank Dink, an Armenian-Turkish journalist. Ten years later, the legal proceedings on the case continue. (photo: Hrant Dink Foundation)

Turkish authorities knew of an assassination plot against Armenian-Turkish journalist Hrant Dink six months before he was gunned down in 2007, a defendant in the case told a court this week.

The Istanbul court is hearing charges against 85 people, including former police chiefs, accused of involvement in a conspiracy to kill Dink and crimes ranging from orchestrating the murder to dereliction of duty in failing to prevent it.

A teenager shot dead Dink, an outspoken advocate for reconciliation between Turks and Armenians, in broad daylight outside of his newspaper Agos in central Istanbul, sparking a public outpouring of grief and mass demonstrations.

A court in 2011 jailed Ogün Samast, the 17-year-old gunman, for nearly 23 years for killing Dink, and Yasin Hayal was sentenced to life in prison for ordering the murder. The two are from the Black Sea town of Trabzon. Initially, judges ruled the assassination was carried out by far-right nationalists acting on their own.

Now, a court is considering indictments that allege state officials deliberately covered up evidence before and after Dink was killed. Many of the defendants are said to adhere to the religious teachings of Fethullah Gülen, a United States-based Muslim cleric that Turkey says masterminded a bungled military coup attempt in 2016.

At a December 4 hearing, Metin Yıldız, the former head of intelligence for the gendarmes in the city of Trabzon who is on trial in the conspiracy case, told the Istanbul court he had informed co-defendant Ali Öz, who was the gendarmes commander in Trabzon, after being tipped off about a plot ın 2006, HaberTurk newspaper reported.

Öz testified that he had no recollection of the conversation and denied any connection with the perpetrators, HaberTurk said.

“It was certain that Yasin Hayal and three or four others were going to carry out this action. There was an intelligence failing, there is no excuse for this,” Yıldız told the court. He said he received the tip from an official at the state-run grain broad, who has been previously identified as an informant and Hayal’s uncle.

Dink’s family and his supporters have long accused the state of complicity by ignoring information about its preparations and failing to adequately protect the journalist.

Before this death, Dink was targeted for what he wrote about Armenians and the World War One-era genocide against ethnic Armenians in Turkey, facing censure from the military, threats by officials and physical assaults during his 2005 trial for “insulting Turkishness.”

Agos and lawyers for the family have approached the latest trial with caution. While they welcomed the prosecution of officials for their alleged involvement in the murder, they have said they believe it was not only the Gülen network behind the plot, calling it a “consensus murder” and expressing concern that the political battle between the Gülen network and the government, which had worked closely together until about 2010, might still obscure the truth.

“It has been 10 years since the murder. It is still unknown who gave [the] order,” according to a story in Agos earlier this year. “We don’t know how many years it will take to have the whole truth. [The] Dink murder case may still get lost in the dark tunnels of Ankara; this is still a possibility. For now, we are concernedly watching how far the fractures caused by the political fights will go.”