The setting for the run, between two natural wonders near the Chinese border, was a stark reminder of how much this country has to lose. 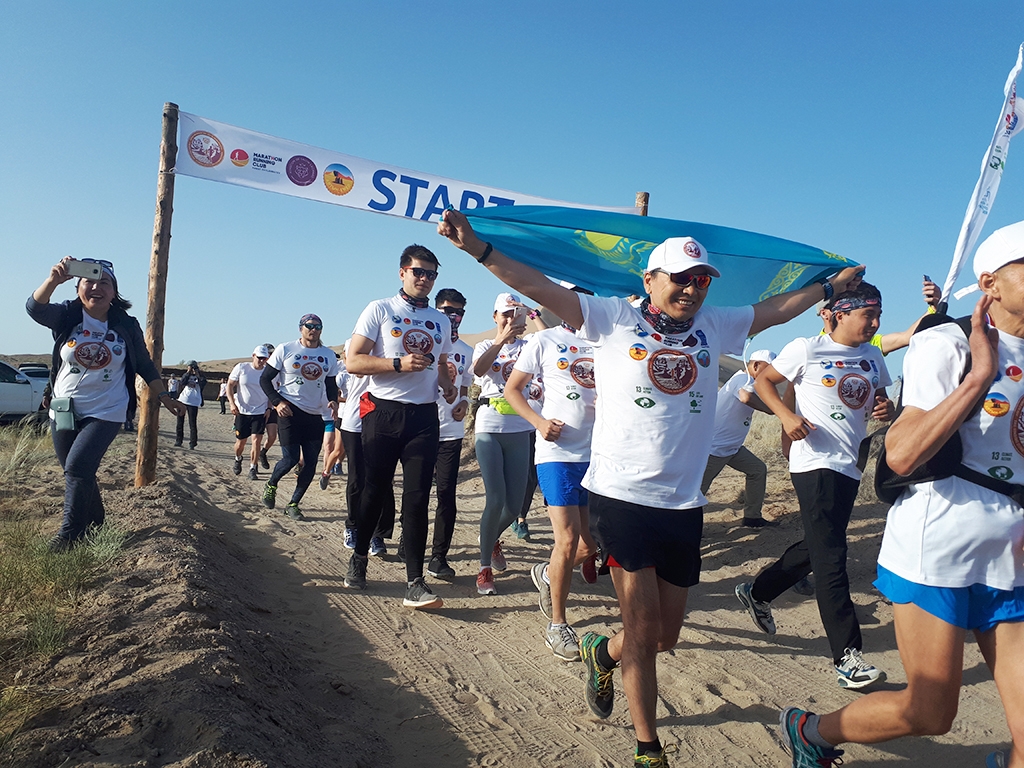 To the strains of a patriotic song, Marat Zhylanbayev led his team off the starting line and into the desert.

Two dozen runners aged 17 to 60, their faces wrapped in scarves to keep out the blowing sand, set off May 21 on a 250-kilometer odyssey to raise awareness about the disappearance of native animal and plant species.

“We want to draw our society’s attention to preserving unique flora and fauna,” said Akmaral Agazhayeva, biodiversity specialist at Kazakhstan’s United Nations Development Program, or UNDP, which sponsored the run.

“Every year, according to UN data, between 100 and 1,000 species of animal disappear. In Kazakhstan, species like the saiga [antelope], snow leopard, Persian gazelle and many others are under threat of extinction.”

Earlier this month, the UN released a report forecasting that up to 1 million plant and animal species are on the verge of disappearing because of climate change and damage to habitats caused by human activity.

The setting for the Kazakhstan run, between two natural wonders near the Chinese border, was a stark reminder of how much this country has to lose.

The starting point was the Singing Sand Dune, which thrusts out of scrubby ground along the Ile River in the Altyn-Emel National Park and is named for the thrumming sound it makes when thrill-seekers slide down its 150-meter slope.

Runners finished at Charyn Canyon, an awe-inspiring gorge lined by towering rock sculptures carved over 12 million years ago by water and wind.

It was to preserve such habits and their wildlife that the runners, including professional athletes and amateurs with day jobs, hurtled through the wilderness over two baking-hot days.

It was billed as an ultra-marathon, although there was no competitive element and runners took turns to complete stages of up to 10 kilometers.

“I love nature,” organizer Zhylanbayev, a 55-year-old Guinness record-setting marathon enthusiast who has raced through deserts from the Sahara to Nevada, told Eurasianet.

“All of nature, the bio-system in its entirety, depends only on us, on people. We’re the main predators. Our job is to communicate this to everyone – the government, the people – that they should look after nature.”

Nature clearly needs looking after in Kazakhstan, where over 600 of its 14,000 plant and animal species are threatened with extinction, government statistics show. That includes 222 animals and 387 plants.

Catastrophic erosion of natural habitats is part of the problem.

Kazakhstan lost 10 percent of its forests in the decade up to 2016, plus 25 percent of the iconic orchards where the apple originated.

Preserving habitats takes on extra importance in Kazakhstan, according to the UN-sponsored Biodiversity Finance Initiative, or BIOFIN, a global project seeking to fund biodiversity management. It identifies Kazakhstan as home to “a huge space of preserved steppe ecosystems that have been destroyed in other countries of Eurasia, enabling a large part of the populations of steppe species to find refuge there.”

But the scale of seemingly unspoiled landscapes in the world’s ninth-largest country makes the public blasé, argues Yuriy Ponomarev, an events manager and athlete running in the ultra-marathon.

“We have immense natural spaces, and perhaps from that point of view not everyone grasps that all this could disappear at some point. Everyone thinks we have plenty of it, so it’s fine,” he told Eurasianet.

That is where the ultra-marathon comes in. For some years, biodiversity loss has been on the radar not only of the government but of the new president, Kassym-Jomart Tokayev, who came to power following the recent resignation of Nursultan Nazarbayev.

Speaking in his previous capacity as Senate chairman during a parliamentary debate on biodiversity in 2016, Tokayev noted the link between environmental protection and economic success. He said Kazakhstan would struggle to meet its strategic development goals without progress, and called for “economically and socially justified measures to stimulate the preservation and sustainability of elements of biodiversity.”

Such words from the new president will delight experts who have pointed out that Kazakhstan’s decision-makers have been slow to see the link between ecology and the economy.

Funding for biodiversity management in Kazakhstan falls short by over 50 percent of what’s needed, BIOFIN says. But the government recently signed up to pilot measures including biodiversity and carbon offsets, tax perks for ecotourism, an emission trading system and expanded subsidies for game breeding, which are already in place for the Caspian red deer.

With UNDP support, the government is creating protected areas for wildlife. At one such nature reserve there are hopes of reintroducing Caspian tigers, which died out in Central Asia in the 1960s.

Efforts to protect Kazakhstan’s fauna include a moratorium on gathering saxaul, a shrub that helps prevents desertification.

The government has signed the international Convention on Biological Diversity, and committed to targets aimed at safeguarding ecosystems and slowing – or ideally reversing – biodiversity loss.

“It’s a great honor for me to support this, to show how beautiful our nature is and how important it is to preserve the diversity of living things on our planet,” actor and documentary-maker Anuar Nurpeisov told Eurasianet.

His T-shirt sported a slogan that is currently all the rage in Kazakhstan: “You can’t run away from the truth.”

Nurpeisov said the point of this run was to show people the impact of their actions on the natural world around them.

“The most dangerous animal on earth is man,” he said. “We’re like evil geniuses: we’re clever, but our cleverness presents a great danger to the world. It’s time to acknowledge that there will be irreversible consequences if we don’t at some point stop destroying the house we live in.”