A series of fatal accidents involving street sweepers has prompted debate in Azerbaijan about living standards. 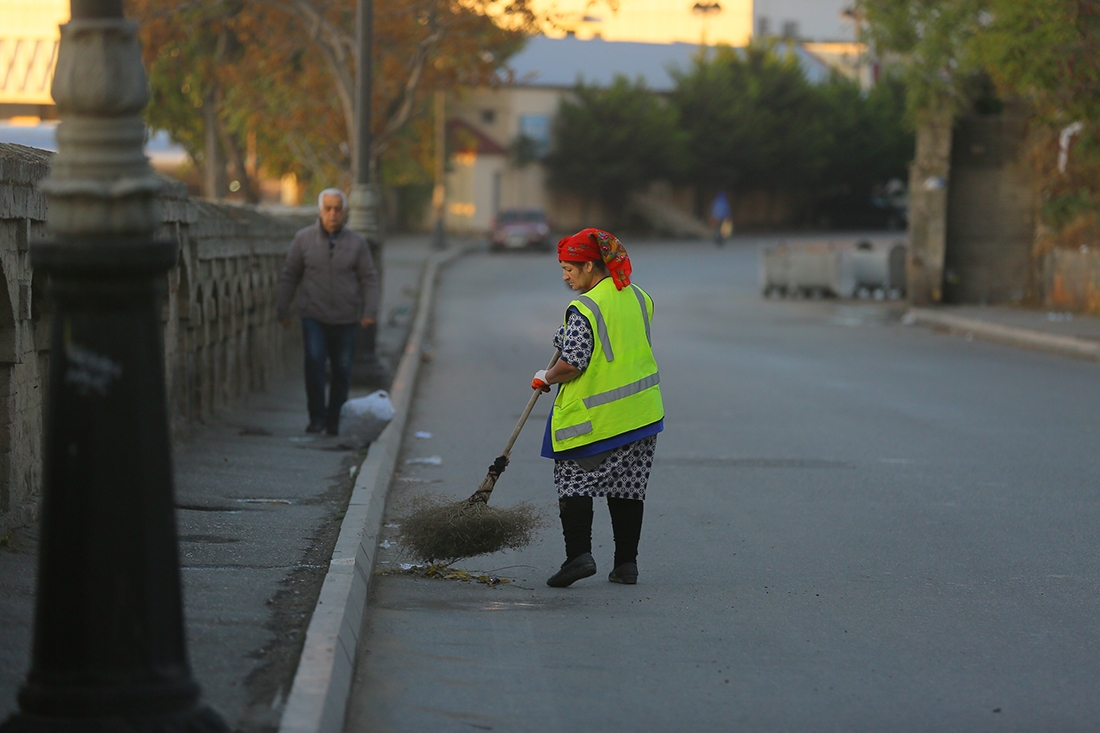 In the Sabayil district of Baku, the city’s famous winds bring dust and debris every day. And each morning, Tarana, a pensioner in her mid-sixties, picks up her broom and begins her daily routine of cleaning the streets. With the glimmering Aquatic Palace in the background, Tarana makes her way from a calm side street surrounded by newly constructed restaurants and art centers towards the highway leading out of Azerbaijan’s capital.

The job is dangerous, as it requires being on foot in the middle of speeding traffic. “Drivers don’t care,” she said. “I’ve been nearly hit many times.” And as a result of doing the work for over a decade, she said she can’t hear well after being subjected to years of constant wind and highway noise.

Since gaining independence in 1991, Baku has used its oil and gas wealth to transform itself, shedding much of its Soviet past and replacing it with towering skyscrapers and high-end shops. But one thing hasn’t changed: the streets are still mostly cleaned by older women wielding brooms made by hand out of sticks.

Like Tarana, many of them don’t like the work but are forced into it by their low pensions: The minimum pension in Azerbaijan is 110 manats, about $65. (Tarana’s pension is 140 manats a month.)

Meager pensions force many retirees to continue to work in order to scrape by. Gulnara, a street sweeper in Baku’s Yasamal district, told Eurasianet that she does the work “because I have to provide for my family. I’m the only one capable of working.” She described starting each morning at 5 a.m. to make her rounds in the district, for which she is paid about 250 manats each month. “I don’t have a choice. I have to pay my rent and buy my bread somehow,” she said.

Elmira, who also works as a street sweeper in Yasamal, said she earned 300 manats a month, without which it would be difficult to send her children to school. She appreciates the job, she said, but complained that some inconsiderate drivers throw their trash out their windows directly in front of her. “This is something I could live without,” she said with a laugh.

Baku is far from the only prosperous post-Soviet city still employing street sweepers. Moscow, for example, also uses street sweepers, though they tend to be labor migrants from Central Asia.

But a recent string of fatal accidents involving street sweepers in Baku has led to a public debate in Azerbaijan about why, amid such wealth, its elderly are forced to do such difficult and dangerous work.

Even government-friendly media have raised the alarm. In January 2018, news website Report.az published a video documenting street sweepers dodging racing traffic, and it was picked up by Haqqin, a news site close to Azerbaijan’s security services. Two months later, when a 53-year-old street sweeper was killed in a hit-and-run accident, Haqqin ran another piece criticizing the authorities’ callous response.

In April 2018, an 82-year-old woman was hit by a car and the opposition news site Meydan TV ran a report citing eyewitnesses who said the authorities quickly removed the woman’s uniform in an apparent attempt to hide that she was a street sweeper.

The public outrage has been spurred not only by the tragedies themselves but by the appearance that the government lacks sympathy. After an accident resulting in the death of an elderly woman, the Parliamentary Committee on Health’s deputy chairman, Musa Guliyev, told the news site oxu.az that “old women are not forced to do this work,” and asked rhetorically, “if one is physically capable of doing it, why not?”

Guliyev came in for heavy criticism as a result; on a related video some social media users asked if Guliyev’s family members would ever work as street sweepers, or dared him to take on the job for a day before opining. One user commented that Guliyev “should be fired. His job is to serve the people, not torture them.”

In a separate incident, a member of parliament, Ganira Pashayeva – who tries to champion the cause of Azerbaijan’s poor – made a public visit to the family of a street sweeper killed on the job, arranging for a new home and financial assistance. Here, too, social media reaction was harsh, with many dismissing Pashayeva’s munificence as a stunt and others asking why nothing was done for the family before the woman was killed.

Now, Baku has started to adopt machines to clean the streets mechanically. In August 2018, the city began using 10 German-manufactured street cleaning machines – bought using financing from the World Bank – on some of Baku’s busiest highways, Mubariz Huseynov, head of sanitary and hygiene services at Baku’s Housing and Utilities Department, told Eurasianet. The department has ordered a further 50 machines, some of which are smaller and can clean narrower streets. Huseynov said he expects the new machines to enter service by the end of the year.

But that won’t solve the underlying problem, many have complained, and public reaction to the adoption of the machines has been mixed. “These women will end up without work. What will they live on?” one social media user asked.

Gulnara, the street sweeper in the Yasamal district, said cleaning the highways was too risky for humans to do and said she was confident the machines wouldn’t replace her. “Even if [Baku] buys machines, it won’t affect me. We have more small spaces than large roads,” she said.

For her part, Tarana said she didn’t expect the city to change anything about her situation but said that if the machines put street sweepers out of work, it would be the government’s responsibility to help those replaced find some other way of making ends meet. She wasn’t optimistic, though. “I don’t feel like a citizen of my country,” she said.