Detainees of the Caucasus

An exchange of Armenian and Azerbaijani detainees could help build trust to make further progress in peace negotiations – but it could also exacerbate tensions. 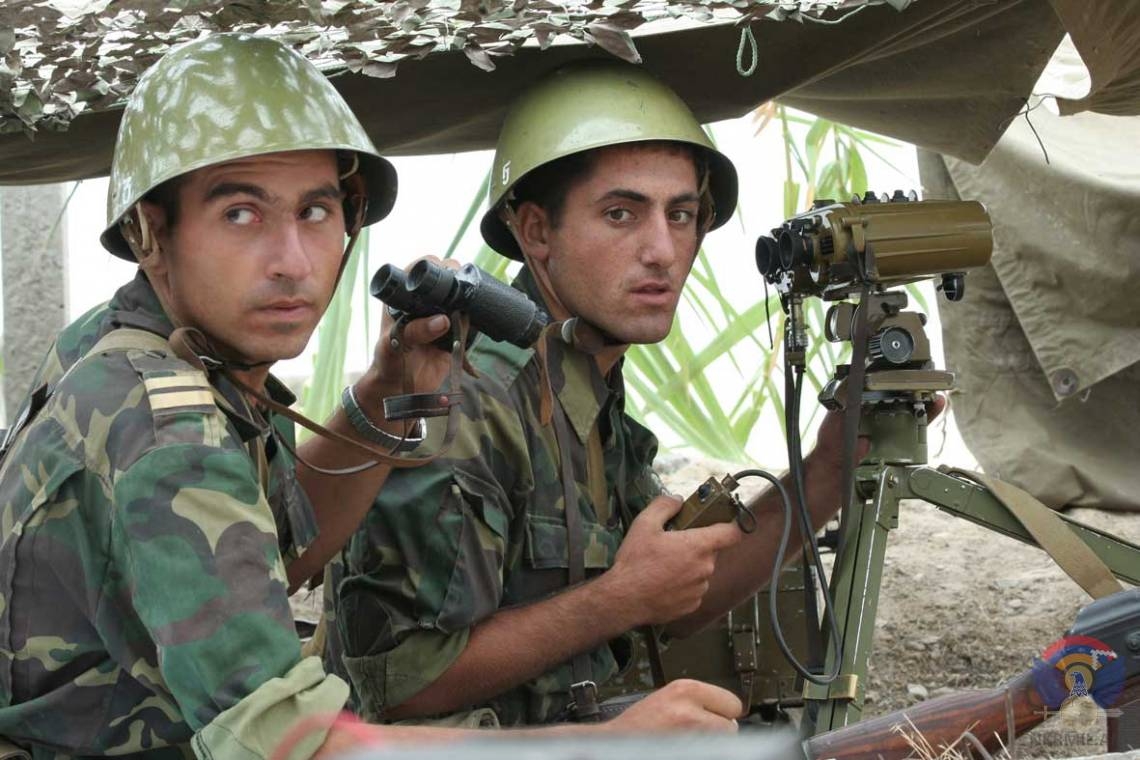 Eyeing each other warily (nkrmil.am)

As Armenia and Azerbaijan tentatively progress toward resolving their three decade-long war, they are struggling to deal with a chronic irritant: a handful of detainees on each side.

At issue are three Armenians being held in Azerbaijan, one Azerbaijani in Armenia, and two Azerbaijanis in Nagorno-Karabakh, the territory that is internationally recognized as part of Azerbaijan but which has been controlled by Armenian forces since a ceasefire was signed in 1994.

Azerbaijan has offered to exchange all of the men it holds for all those the Armenians hold, in keeping with the practice that the two sides have largely followed in the past 25 years. But Armenians have rejected that, since two of the Azerbaijani detainees were convicted of serious crimes, including the murder of a 16-year-old boy and a military officer in Kelbajar, an Armenian-occupied territory adjacent to Karabakh.

All the Armenians, meanwhile, appear to have been civilian residents of border villages who wandered across the border accidentally. One, many in Armenia believe, may have been kidnapped from Armenian territory in an Azerbaijani raid. (Azerbaijan, nevertheless, has accused all them of being saboteurs and has sentenced each of them to long prison terms.)

For Armenians, the prospect of handing over Azerbaijanis guilty of killing Armenians evokes memories of Ramil Safarov, a young Azerbaijani lieutenant who murdered an Armenian counterpart during a NATO event in Budapest in 2004, attacking him with an ax while he slept. Eight years later, Hungary extradited him back to Azerbaijan, where he was greeted with a hero’s welcome, enraging Armenians.

“Now do we agree to return two more Ramil Safarovs to Azerbaijan?” Armenian Prime Minister Nikol Pashinyan asked in November, referring to the possibility of a swap.

The fates of the detainees have gotten wide media and social media coverage on both sides. As negotiations over Karabakh have picked up in recent months, the two sides have sought to somehow resolve or at least mitigate the detainee issue as a way of creating a less heated public atmosphere for the talks. Following the most recent meeting between the Armenian and Azerbaijani foreign ministers, in Moscow in April, the diplomats issued a statement saying they had agreed “to take measures, on a mutual basis, to allow families to have access to their relatives held in custody in the respective detention centers of the parties.”

Managing the detainee issue, along with potential exchanges of journalist visits and other “people-to-people” contacts, is one of a number of potential confidence-building measures that could build trust between the two sides. “It’s one of several issues that, if we could make progress on it, it would give a positive impetus to the talks,” one Western diplomat familiar with the negotiations, speaking on condition of anonymity, told Eurasianet. But given the divergent views on how it should be resolved, there also is a “danger” that the detainee issue could “create more stress than it alleviates,” the Western diplomat said.

At the end of April, Russian Foreign Minister Sergey Lavrov weighed in on the question, explicitly endorsing Azerbaijan’s position. Asked about a detainee swap between Israel and Syria, Lavrov – who had just hosted the foreign ministers’ meeting – broadened the question to include Karabakh as well.

“We always favor an exclusively humanitarian solution to situations like this: the exchange of remains, POWs and detainees in line with the all-for-all principle. We believe this helps promote an atmosphere of trust in conflict areas, whether it’s the Middle East, Nagorno-Karabakh or the southeast of Ukraine,” Lavrov said at an April 30 press conference.

The statement elicited bewildered reactions from the Armenian side. “I’m completely convinced that the representative of the Russian authorities, high-ranking diplomat Mr. Lavrov, didn’t mean the criminals whose hands are drenched in the blood of an underage child,” said Davit Babayan, a senior adviser to the de facto leader of Nagorno-Karabakh, in an interview with news website news.am.

“The deliberate killing of a minor is a serious crime,” Anna Naghdalyan, spokesperson for the Armenian Foreign Ministry, told Eurasianet. “Accordingly, the ‘all for all’ principle should not be abused to secure impunity for grave crimes.”

There is a “lack of trust [on the Armenian side], backed by negative experiences from the Safarov affair,” Anahit Shirinyan, a Yerevan-based analyst, told Eurasianet. There is also a potential moral hazard in an all-for-all exchange, she added: "The moral dilemma for anyone making the decision is between saving a life and the risk of creating a precedent for this in the future whereby the Azerbaijani side can engage in diversionary attacks and, after its security operatives are caught, expect an asymmetrical swap with civilians. The question here is, are you creating more risks for your own citizens in the longer term?"

But there are some indications that Pashinyan is considering the all-for-all swap. An adviser to the prime minister, speaking on condition of anonymity, told Eurasianet that Pashinyan is considering including the two convicted murderers in an exchange. Defense Minister Davit Tonoyan told journalists in Yerevan on May 9 that “negotiations are going on now so that we know who we are exchanging and for whom.” Asked about the possibility of an “all-for-all” swap, he answered: “I can’t talk about that now.”

Richard Giragosian, another Yerevan-based analyst, said that the all-for-all exchange could boost progress in the peace talks. “The possibility of a sweeping exchange, as implied by the Russian mediators, may offer a fresh opportunity to garner a clean slate and a fresh start that may also bolster confidence-building measures significantly. And just the fact that these measures are under consideration and subject to discussion by all sides demonstrates a fresh sense of optimism and hope,” Giragosian told Eurasianet.

Giragosian added, though, that were Pashinyan to agree to exchange the two convicted murderers, it could exacerbate a divide between Yerevan and the de facto Karabakh authorities, who have been conspicuously cool to the ongoing talks between Armenia and Azerbaijan. “The possible release would be difficult for Karabakh to accept” and “could further reveal the divide between Armenia and Karabakh,” he said.

“Overall, in the context of this conflict, you can go back to the ‘90s and see that there were exchanges like this in the past where the sides were able to exchange prisoners and it did have a positive impact,” the Western diplomat said.  “Both sides obviously have their own view of the history and what happened at different stages, but the … argument that ‘we’ve done this in the past’ needs to be taken into consideration.”

The detainees at issue include:

Dilham Askerov and Shahbaz Guliyev. In 2014, they entered Kelbajar, an Armenian-occupied territory adjacent to Nagorno-Karabakh along with a third Azerbaijani. They were accused of killing a military officer and a teenaged boy, and the third Azerbaijani was killed while the group was being apprehended by the authorities. They were charged with a variety of crimes including espionage and murder and were convicted later that year; Askerov was sentenced to life in prison and Guliyev to 22 years.

Elvin Ibragimov crossed the border from Azerbaijan into Armenia in March 2019, apparently after having gotten lost. He was wounded by security forces and was treated in an Armenian hospital but was not charged.

Arsen Baghdasaryan, a soldier (according to the Armenian side, demobilized) who crossed the line of contact from Nagorno-Karabakh into Azerbaijan proper in 2014.  He was accused of sabotage and sentenced to 15 years in prison.

Zaven Karapetyan, whom Armenia says is a mentally ill homeless man who accidentally crossed the border into Azerbaijan in 2017.

Karen Gazaryan, who crossed the border from Armenia to Azerbaijan in 2018. It was unclear how he crossed and many in Armenia believe he may have been kidnapped from Armenian territory and taken across the border. Azerbaijani authorities accused him of sabotage. In February 2019 he was sentenced to 20 years in prison. His family have urged Pashinyan to exchange him for the Azerbaijani prisoners, including Askerov and Guliyev, and supporters blocked the highway near his home village in order to call attention to his plight.

Another Azerbaijani, Elnur Huseynzade, crossed the line of contact near the Karabakh village of Talish in 2017. He served a two-year prison sentence and was released in February, but has reportedly refused to return to Azerbaijan. The Karabakh authorities said they were exploring sending him to a third country, and Azerbaijan has issued an international warrant for his arrest. He is not considered subject to the detainee exchange.