The referendum next month is expected to be approved easily. 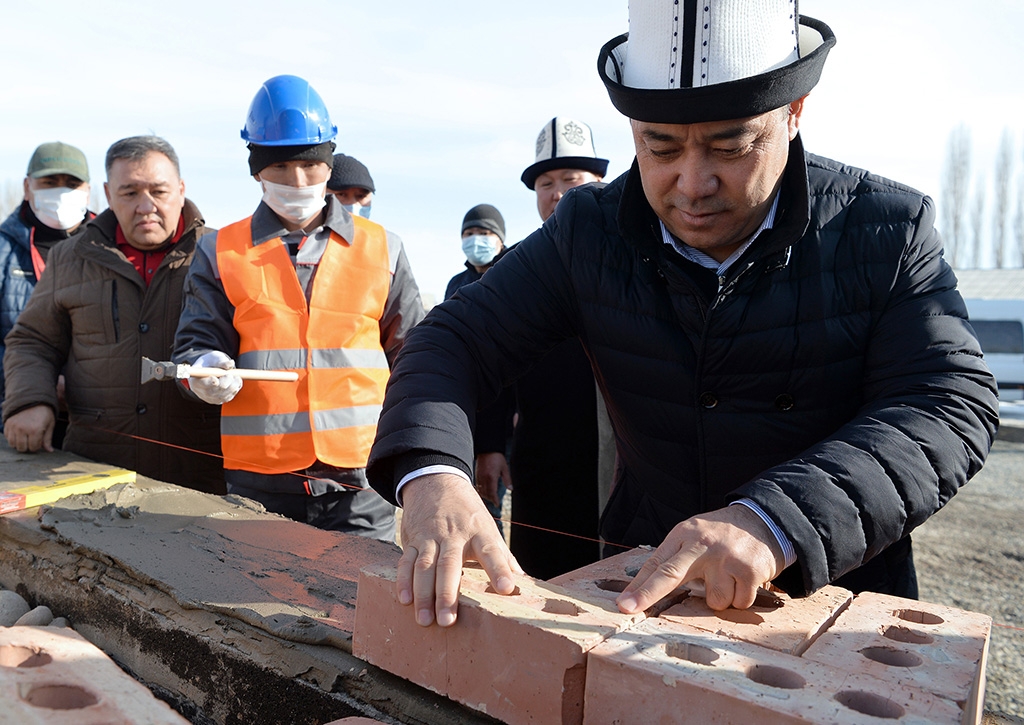 Japarov is building a new vertical of power. (government handout)

Talk of a new constitution has dominated the news agenda for months in Kyrgyzstan, although few people fully understood what was being proposed.

That changed in the first half of February, when parliament finally unveiled a document that many experts fret will return the country to strongman rule.

President Sadyr Japarov will, under the new arrangement, should it be approved in the planned April 11 referendum, have his powers greatly broadened. The head of state is to become head of the executive and assume the authority to appoint almost all judges and heads of law enforcement agencies.

Proponents of the change say it is needed to address inefficiencies in the current constitution and is being adopted at the “demand of the masses.”

Legal reform and rights advocacy groups are not impressed. Experts at a February 16 roundtable variously called the proposed new basic law a facsimile of the Russian system and a “ticking time bomb.”

Constitutional law expert Saniya Toktogaziyeva was scornful of talk that the transition to a strong presidential model was a reflection of public will.

“In reality, this is a super-presidential form of rule with a centralized vertical of authority, and we are seeing manipulation and populism,” she said.

Much of the constitution is made frightening to its detractors by its fuzzy imprecision.

One section, for example, envisions the creation of something called the People’s Kurultai, a national-level analogue of a traditional form of local power-brokering. This body would be given the authority to propose government policy, and since the kurultai is meant to come with the imprimatur of popular legitimacy, it could become politically problematic to push back against those proposals.

Experts at the Bishkek-based legal aid clinic Adilet said in their analysis that they were perplexed by the idea of a national kurultai.

“The aims and motivations for creating the People's Kurultai seem unclear, since if the principles of democratic government are to be followed, it would seem quite logical to grant this authority to the … Jogorku Kenesh,” read the analysis, referring to the Kyrgyz parliament.

In one scenario, the kurultai could become an instrument for the president to “interfere and put pressure” on all institutions of authority and on citizens in pursuit of his own interests, Adilet said.

Adilet believes that even though the People’s Kurultai is nominally intended as just an advisory and supervisory assembly, it may by degrees get involved in the appointment of judges and initiating legislation. The Prosecutor General’s Office will also get a chance to put forward legislation.

In a significant change, the parliament, meanwhile, is being whittled down, from 120 members to 90.

Japarov makes much of the fact of his direct appeal to the masses, and he intends to give every impression of this being a two-way street.

Under the current constitution, a referendum can only be convened by approval of more than half the members of parliament or by a public petition attracting support from 300,000 signatories. Now, however, the president will be able to hold a referendum at “his own initiative.”

As Toktogaziyeva noted, this arrangement harks back to the times of president Askar Akayev and Kurmanbek Bakiyev, who were overthrown in 2005 and 2010, respectively, in part amid perceptions that they had amassed excessive power unto themselves.

Such is the way of Kyrgyz political culture that any referendum proposed by the powers of the day is invariably expected to be approved with a large majority. No political commentators, for example, would be so foolhardy to suggest that the April 11 referendum will not go Japarov’s way.

A whole other area of the constitution has civil society worried. A particularly vague passage in Article 10 of the document states that in the interests of protecting young people, anything deemed to go against moral values and the “public consciousness of the people of the Kyrgyz Republic” could be restricted by law.

Lawyer Azim Jeenbayev objects to this on the grounds that it is unclear what laws would specifically underpin such a goal. He said that this aspect of the proposed constitution contains the seeds of a season of censorship and restrictions on freedom of speech and peaceful assembly.

There is also something troubling, said Jeenbayev, in the references to “moral values,” since Kyrgyzstan is a multi-ethnic and multicultural state, and that language could mean different things to different communities.

“People with varied views and beliefs live in Kyrgyzstan, there are different systems of faith, but for all that, they are supposed to be regulated by one legal system spelled out in the constitution,” Jeenbayev said.

The same section has the Bishkek-based journalism advocacy group Media Policy Institute up in arms.

Which state body will be tasked with deciding upon the “yardstick used to determine what is contrary to morality and moral values,” the group asked in its analysis of the proposed constitution.

“Such vague, broad definitions … provide officials with excessive discretion to interpret the distinction between lawful and unlawful behavior and will allow them to abuse [the rules] to suppress freedom of expression and dissent,” the group said.

The outgoing constitution forbids state bodies from restricting the right of citizens to hold peaceful rallies or to oblige them to coordinate their activities with the authorities in advance. This provision is being scrapped – a fact that the Media Policy Institute describes as “a restriction on the rights of citizens to peaceful assembly.”

Experts do see some glimmers of good news, though.

One provision forbids criminal prosecution for people deemed to be spreading defamatory and insulting content, leaving the civil courts to deal with such matters. The new constitution also grants citizens enhanced freedom of information privileges.

Japarov’s nationalistic instincts are reflected in one other section. The existing constitution allows citizens to not display their ethnic affiliation in their identification documents. But Japarov said shortly after being shoved into power by a markedly chauvinistic street movement that he wanted that to change.

With its history of bloody communal violence – most notably the pogroms in Osh in 2010 – Kyrgyzstan could come to rue trying once more to forcibly highlight ethnic differences, said experts at Adilet.

“In the long term, such provisions can lay the foundation for increasing manifestations of discrimination against ethnic minorities, as well as other violations of human rights and freedoms.”