Did the Devil Go Down to Georgia in a Smart ID Card? 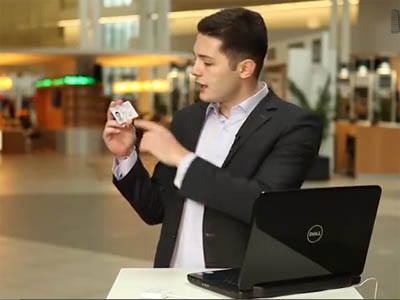 An official video explains that Georgia's new ID cards are not the tool of the Antichrist. (Credit: Ministry of Justice of Georgia)

Everyone can sigh with relief. Georgia’s justice officials say they are not in league with the devil and have no plans to assist the Antichrist to take over the world.

In a bizarre public-service announcement, Georgia’s Justice Ministry on April 20 announced that new, biometric ID cards for Georgian citizens are not a satanic creation. “The assumption that the new ID card is the seal of the Antichrist and that it contains the sign of the beast is not correct,” explained an earnest young man in a video produced by the ministry.

“Georgia’s Public Registry took upon itself a commitment not to place the number six three times in a row on any of the IDs,” the man elaborated, in reference to the mark, which, according to the Bible's Book of Revelation, will be the mark of a beast which will force worship of another beast. "Nor will it be in the future."

But the assurances have not assuaged widespread suspicions. This January, Georgian Orthodox Church faithful gathered in front of the justice ministry to protest against the cards, which, they claim, will help the devil control Georgia and bring on the Antichrist.

“The monks have inspected the IDs with ultraviolet rays and they got this horrendous picture,” one female protester (wearing a shirt emblazoned with the message "Party with us") told the news site Netgazeti.ge. She showed a picture of a red devil with "666" inscribed on his forehead and horns sprouting out of his head. Another woman offered additional alleged proof of the approaching apocalypse; a photo of an icon of the Virgin Mary "weeping blood," as she said.

In a country where the Church ranks as the single most trusted institution, the state apparently felt it cannot ignore such concerns. Nor are they the concerns of an isolated minority. After priests began speaking of the alleged Antichrist menace, many university-educated, urban professionals also refused to accept the IDs.

To solve the dilemma, the state chose instead to engage the Church. At the government’s prodding, top prelates gathered for a conclave and, after some deliberations, the Georgian Orthodox Church's ruling body, the Holy Synod, expressed approval for the IDs so long as they do not contain the devil’s numbers.

But that imprimatur failed to stop the campaign. Individual priests continue to wage war against the cards and are rallying their parishes to join the battle.

At the same time, government officials -- and, chief among them, Justice Minister Tea Tsulukiani -- are facing criticism for not ignoring such concerns and choosing instead to cater to them by offering explanations. Tsulukiani vowed to do her best to dispel the antichrist fears, but it is unclear how far she’s willing to go to make her case. Maybe another video?