Residents are torn whether to rebuild or leave: “If the Russians weren’t here, most people would have already left.” 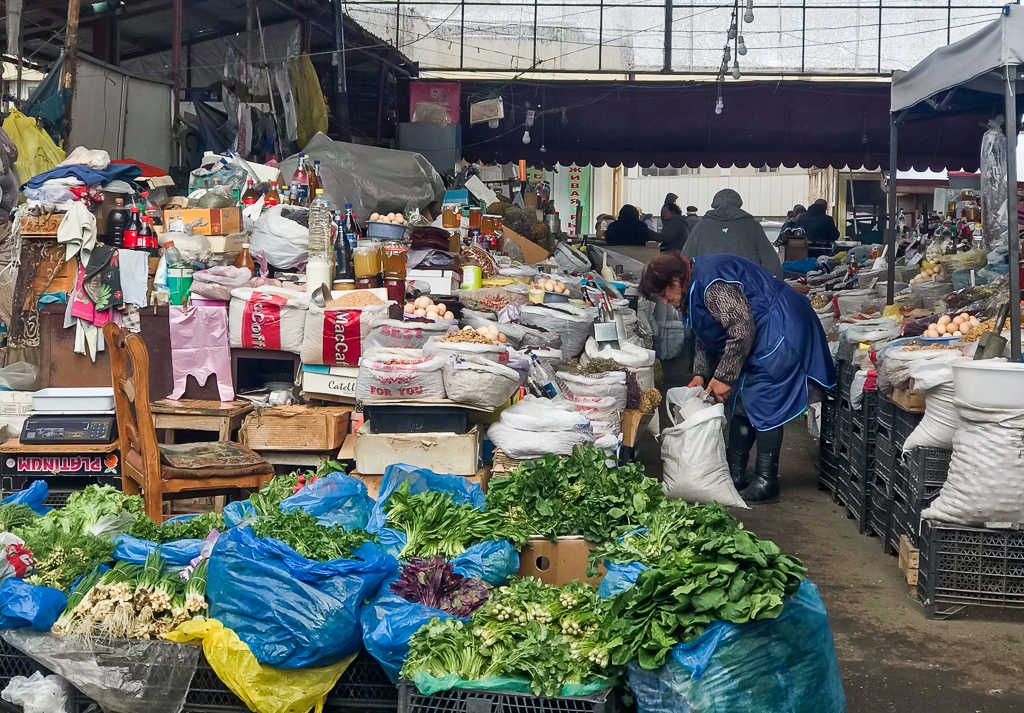 The market in Stepanakert (photos by Ani Mejlumyan)

In last year’s war, Karabakh’s Armenians lost three-quarters of the territory they used to control, and the safety of the remaining population now depends on a Russian peacekeeping mission whose mandate expires in 2025.

For many here, the fate of Karabakh and its Armenian population seems to be hanging by a thread.

“The future is unclear,” said Tsovinar Barkhudaryan, a newscaster at the public broadcaster Artsakh TV. “People are thinking about staying or leaving. We don’t even know what’s going to happen in a week, let alone in four years.”

During the 44-day war, Barkhudaryan sent her children into Armenia for their safety and her husband fought on the front lines. She covered the war as a journalist. Her family is now back together and they try to focus on the day-to-day. “I’m still in hell,” she said. “I wish I had other news to report.”

After the war she did a story about a man in the village of Tomashen who lost a son during the fighting and whose home is now so close to the new front line that he can see Azerbaijani soldiers from his window. And yet he is staying and even brought his grandchildren there to live. “People like that are the backbone of Artsakh who will make us rise again,” she said, using the Armenian name for the territory. “Now, knowing his story and that my house is safe in Stepanakert, my husband is back from the war, and I have a job and children, how can I leave?” she asked. “What reason do I have to leave? It would be a betrayal to leave these people.”

During the war, well more than half (estimates vary) of Karabakh’s roughly 150,000 people fled into Armenia. Since then, many have returned, though estimates vary widely. Armenia’s minister of social and labor affairs, Mesrop Arakelyan, said in January that 95,000 had returned. The Russian peacekeepers have been facilitating the return of residents, and say that thus far 52,712 have returned.

But many locals doubt those relatively rosy figures. “The numbers are exaggerated,” said Yana Avanesyan, 26, who teaches international law and works with an NGO helping those displaced by the conflict. (International agencies working on the issue use more modest figures; the United Nations has calculated that about 68,000 people who fled from the fighting remain in Armenia.)

And the future will only get murkier. The November 10 ceasefire agreement that ended the fighting provides for a 2,000-strong Russian peacekeeping force to separate the remaining Armenian-controlled areas from the new Azerbaijani positions. But that Russian presence has to be renewed every five years, and either side could veto it. An Azerbaijani veto in 2025 could effectively mean the end of Armenian rule in Karabakh.

“If the Russians weren’t here, most people would have already left,” said sixty-something Lilia Matevosyan, who lives with her family in Martakert, a city to the east of Stepanakert. Before the war they grew pomegranates and grapes but their farmland has been handed over to Azerbaijan. “We want to stay but the land here isn’t as good, and there are problems with irrigation,” her husband, Kamo Balasanyan, said. “We’re left with nothing now.”

Many people look at the substantial infrastructure that the Russian peacekeepers have already built and come to the conclusion that the Russians are here to stay. Especially for older Karabakhis, that is comforting.

“It’s good that the Russians are here, it’s calm,” said Irina Parsadanova, an elderly woman selling dried fruit and honey in Stepanakert’s market. Still, she is stressed by the uncertainty. “We go to sleep at night not knowing what’s going to happen in the morning,” she said. “Where could we go? There’s nowhere to run.”

Many of the young people Avanesyan works with “don’t know what to do – stay or leave, and you don’t really have the moral right to ask them to stay,” she said. “The situation is chaotic now, people are dealing with day-to-day stuff and we aren’t really comprehending the full extent of what happened.”

The uncertainty of the situation was captured in a recent report from the UN, which found that 85 percent of the households who had fled the fighting and remain in Armenia “did not intend to move or were unable to communicate their intentions.”

Avanesyan herself hopes to stay. “I don’t think that my house someday won’t be mine,” she said.

But she is critical of the government’s efforts to attract people to return, including subsidizing rent and utilities and compensating them for lost homes, which amounts to “buying people with incentives, instead of coming up with a long-term strategy of recovering from the effects of the war,” she said. “I see a future here, but the government needs to bring some clarity.”

Like many younger people in Karabakh, she mistrusts the Russian presence and assumes that they are just a temporary fix to a longer-term problem. “This is a bleeding wound,” she said. “As long as we have what we have, people on both sides are not satisfied. For me, war is not a question of ‘if’ but of ‘when’,” she said. 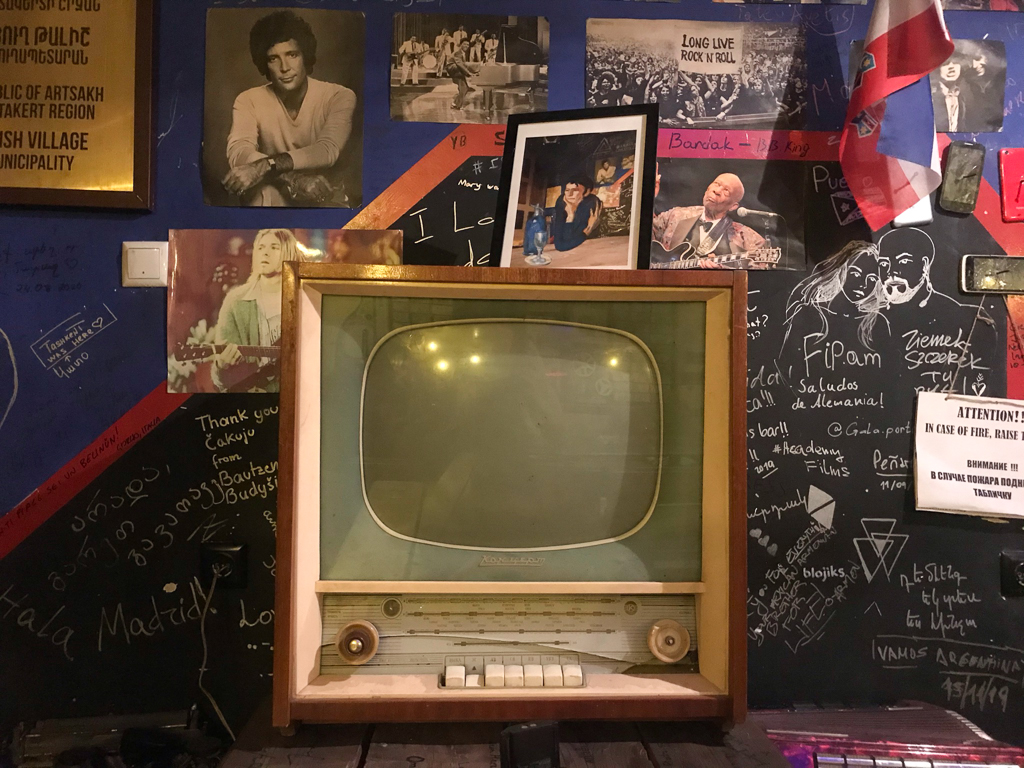 Stepanakert’s landmark pub, Bardak, has acquired some new decorations since the war: an unexploded Smerch rocket, a TV set donated by a friend from Hadrut – a town lost during the war – who took it as he fled, and a door from the ancient fortress in Tigranakert, another site lost during the war. “This door has to go back where it came from,” said Azat Adamyan, Bardak’s owner. “It’s our responsibility, even if our generation doesn’t do it then some other one needs to.”

He fought in the war, and has scars from a cluster bomb on his face and legs to show for it.

In spite of the uncertainty over the territory’s future, he said he is committed to staying. He’s even building a new restaurant in Stepanakert. “People say, why do you invest so much, what if the Russians or Azeris take it?” he said. “I don’t care, because if that happens then I also will have to leave my ancestors’ house, where I was born, and that would be even more painful.”