Exiles from Abkhazia and South Ossetia have formed soccer teams in Georgia, but their efforts remain informal because FIFA frowns on the politicization of soccer. 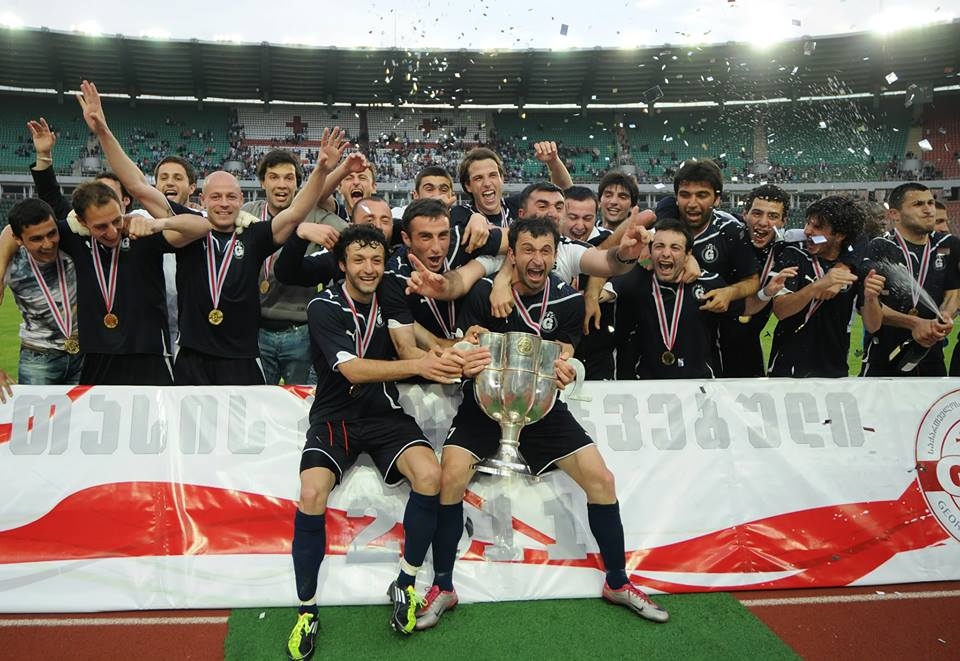 Goridze Chikhradze spent the summers of his youth in Gagra, on Abkhazia’s Black Sea coast. He remembers it as “a tranquil seaside paradise,” and, through the prism of nostalgia for the Soviet 1960s, recalls that ethnic differences went unobserved and neighbors lived as neighbors.

All that changed when the Soviet Union collapsed and civil war broke out in Abkhazia. In October 1992, one of the conflict’s most notorious episodes took place in the Gagra soccer stadium. Abkhazian forces, led by Chechen warlord Shamil Basayev, beheaded Georgian civilians. “They beheaded them in the stadium and played football with the heads,” says Chikhradze. “That was the legacy of football in Gagra, before us.”

Today, Chikhradze’s face is creased from a combination of subtropical sunshine and the passing years, and his hair shines silver. He hasn’t been to Gagra in nearly three decades, but keeps the memory alive as founder of the town’s soccer club in exile, FC Gagra.

“We started FC Gagra in 2004 when it had become clear the conflict was not about to be resolved,” Chikhradze told Eurasianet at the club’s home pitch, Davit Petriashvili Stadium on the outskirts of Tbilisi. “The plan was always to move the club to Gagra, but that has never been possible.” 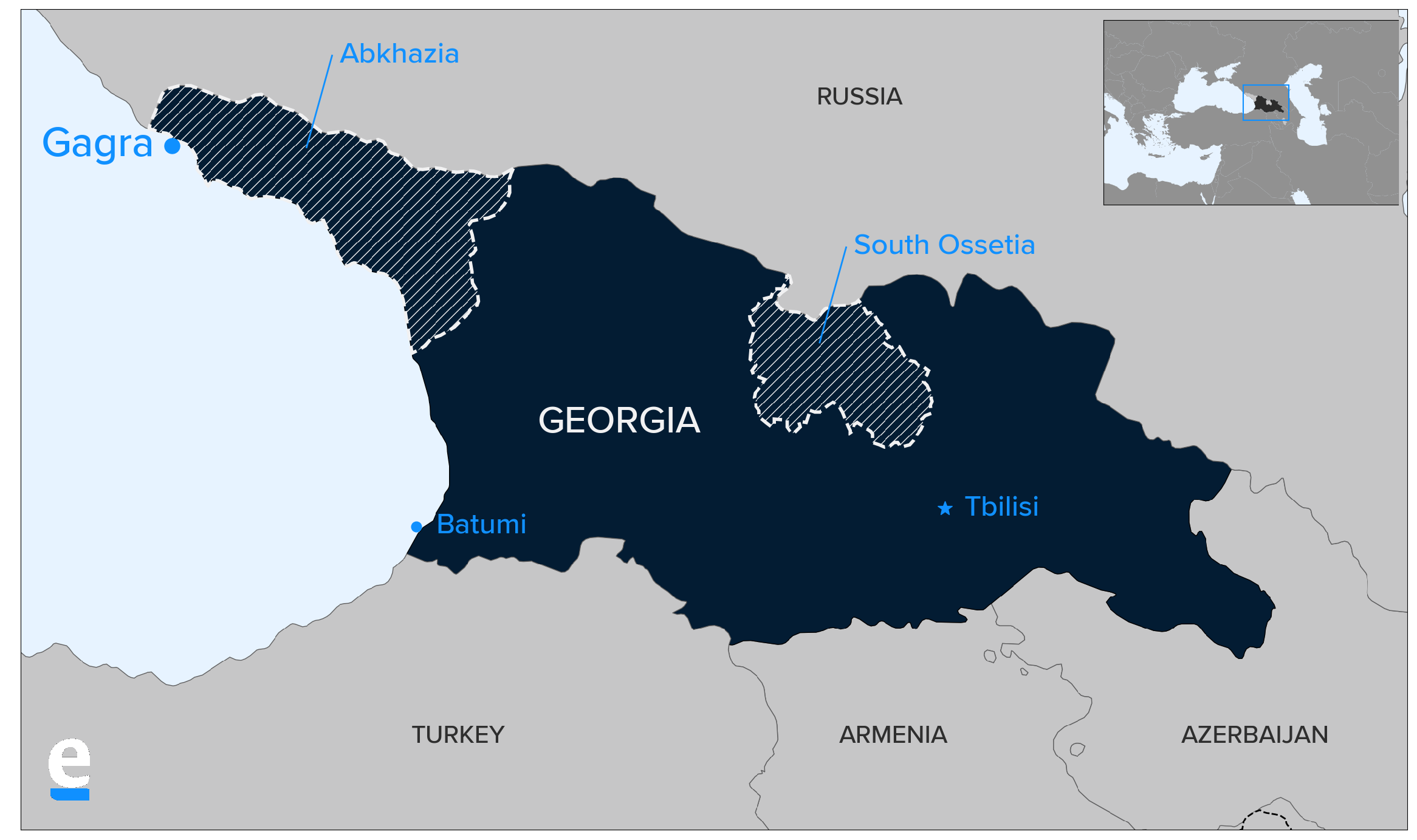 FC Gagra is one of several Georgian soccer teams, including Dinamo Sukhumi and FC Tskhinvali, seeking to represent cities in Abkhazia and South Ossetia, another territory that Georgia lost under similar circumstances.

The Georgian government has undertaken a wide variety of efforts to either entice residents of the breakaway territories to reestablish ties with Georgia proper, or to strengthen its legal claim over the territories. The soccer teams, however, do not fit into this state-driven policy, and are largely grassroots efforts motivated by nostalgia and carried out by sports fans displaced from the lost territories.

There are pragmatic reasons for this: Georgian soccer gets significant financial support from FIFA, the international soccer governing organization, which has strict rules on its member associations engaging in politics.

FC Gagra was founded in 2004 as a joint venture between Chikhradze, who as a former player and youth coach was able to use his football contacts to recruit players, and his cousin, Besik, a businessman living in Ukraine who was able to provide financial and administrative support. Three years later, the club reached the Erovnuli Liga, Georgian football’s top flight. It was the first time the name of an Abkhazian town had appeared in the Georgian league table since Soviet times. “There was peace and calm in Soviet times, so for my generation that has great nostalgic value,” Chikhradze said.

In 2011, FC Gagra achieved their biggest success to date, winning the David Kipiani Cup, the country’s principal knockout competition, thus winning through to European competition for the first time, the UEFA Europa League.

In that tournament they played a match in Cyprus, against the club Anorthosis, and despite representing Georgia, Chikhradze said that some members of Cyprus’s Abkhazian diaspora came to the match and supported them. “They were surprised to see us, but mostly they were just pleased that the name Gagra was being represented, even though we played under the Georgian flag,” he said. “There is a natural kinship between Georgians and Abkhazians.”

In the breakaway territories, of course, the picture is quite different. In Abkhazia, a wholly independent soccer league has operated since 1994, although it is not recognized by UEFA. That means the league gets no funding, access to European competitions, or legal protection for player contracts from the international transfer system. Abkhazian officials have appealed to UEFA for recognition, but to no avail.

Instead, the league relies on Russian largess: A recently completed home stadium for Dinamo Sukhumi was built with Russian financial backing, and Dinamo president Astamur Adleiba told Eurasianet that the new facility “would not have been possible” without Moscow’s support. South Ossetia, while also propped up by Russian aid, is much smaller and does not have a professional soccer league.

There is a second Dinamo Sukhumi, a youth team based in Tbilisi and playing in Georgia’s lower leagues. Like Gagra, the club was founded from below, put together by athletes and fans exiled from Abkhazia.

“The parents’ position was that their children must retain their Abkhazian identity,” David Taktakishvili, the team’s coach told Eurasianet. “Even though they are Georgian, they want to remember their former homes. They were very emotional.”

FC Tskhinvali, meanwhile, was born out of a state effort to regain control over South Ossetia. It was founded in 2007 under the aegis of People of South Ossetia for Peace (PSOP), a Tbilisi-backed entity led by Dmitri Sanakoyev which governed the small bits of South Ossetia then still under Georgian control.

Granted direct passage into the Erovnuli Liga, the club’s early years marked a time of optimism – that a different future to the one offered by the pro-Russian government might be viable in South Ossetia. With those hopes now proven moribund, FC Tskhinvali has become a shadow of what it was.

“The early years were a struggle, but we survived on hope,” says the club president, Sanakoyev’s son Ashkar, about the challenge of assembling a squad capable of competing in the top flight in only a matter of weeks. “The club was supposed to be a sign that there was another way for Ossetians, that there could be a future with Georgia. We are not Georgians, but we can stand with them and live with them peacefully.”

But as the fight – and crucially, the state funding – has gone from the PSOP, so too has FC Tskhinvali floundered, relegated from the top flight in 2017. FC Gagra, meanwhile, was relegated in 2015, leaving Georgia without any Abkhazian or South Ossetian team in the Erovnuli Liga.

Robert O’Connor is a sports journalist based in the UK.