Does Turkey See Its Armenian Minority as a Security Threat? 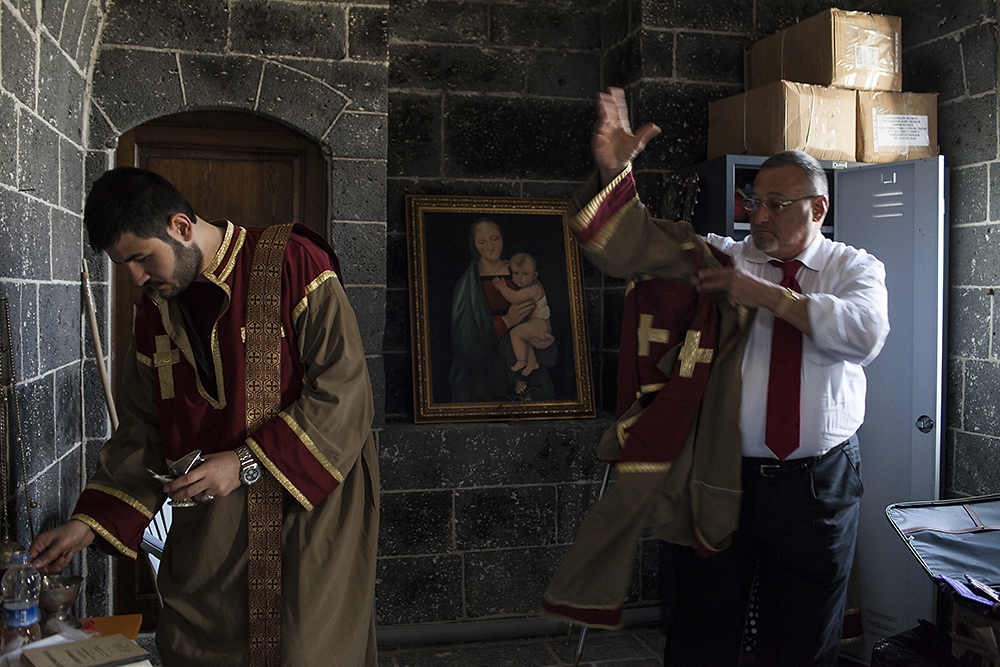 Ethnic Armenians get dressed for an Easter ceremony in Diyarbakir in April 2015 at the Church of St. Giragos, which was renovated with funding from the Armenian Diaspora and pro-Kurdish city government. St. Giragos – the largest Armenian church in the region – was one of six seized under an expropriation law passed in the Turkish parliament in April. (Photo: Anahit Hayrapetyan)

Members of the small ethnic Armenian community in Turkey are feeling increasingly uneasy. Their wariness is an outgrowth of recent claims by senior officials in Ankara that Kurdish rebels collaborate with Turkish Armenians, as well as the government’s move to expropriate several Armenian churches.

The words and actions come amid heavy fighting between Turkish security forces and Kurdistan Workers’ Party (PKK) rebels in towns and cities across southeastern Turkey. In these areas, graffiti with expletives calling ethnic Armenians traitors and accusing them of working with the rebels is commonplace.

“Everybody is afraid, there is fear everywhere,” said one ethnic Armenian resident of Diyarbakır, Turkey’s main Kurdish population center, a city of roughly a million inhabitants. “If the fighting gets worse, the fire will burn us, too. … We are not the direct target. But if this fire grows, it will definitely swallow us, too.”

During his visit to the United States earlier this month, Erdoğan claimed that angry protests in Washington, DC, over Turkey’s fight against the PKK are part of a national and international conspiracy. He described the Kurdish American protesters, gathered outside the Brookings Institution, where he was scheduled to speak, as “representatives of the PKK terrorists’ organization, the YPG [Syrian Kurdish People’s Protection Units], Asala, and the parallel state [a reference to the movement led by self-exiled cleric Fethullah Gülen], who previously fled Turkey and currently live in the United States, standing side by side and live in each other's pockets.”

Asala was an Armenian terrorist group that assassinated dozens of Turkish diplomats in the 1970s and 1980s. A flare-up in fighting in early April between Armenia and Turkey’s closest Eurasian ally, Azerbaijan, that erupted during Erdoğan’s trip no doubt further fueled the government’s anxiety.

But even earlier, in a February 27 speech attacking Turkey’s pro-Kurdish Peoples’ Democratic Party (HDP), Prime Minister Ahmet Davutoğlu also played the Armenian card. The prime minister in the speech accused Turkish-Armenian activists of helping the HDP establish political contacts with Russian leaders. Such contacts at this particular time are guaranteed to raise Ankara’s ire, given the high-level of enmity in Turkish-Russian relations. Bilateral ties have been in a nosedive since November, when Turkish fighters shot down a Russian military jet.

The hostile comments made by top Turkish leaders have alarmed members of Turkey’s ethnic Armenian minority, a group of uncertain size that generally stays in the shadows.

“The expressions of the president and the prime minister are supporting this phenomenon and encouraging those targeting the Armenians,” Garo Paylan, a Turkish-Armenian member of parliament from the HDP, told the Bianet.org news website. “We have seen in the writings on walls in cities under barricades that the word ‘Armenian’ still is being used as a swearword in Turkey.”

For some ethnic Armenians, the suggestion that they are collaborating with PKK rebels brings to mind World War I suspicions that their community supported Russian interests – a notion that helped fuel the mass slaughter of ethnic Armenians in 1915.

Years ago, Erdoğan’s ruling Justice and Development Party had presented itself as free from such prejudices. It attempted a diplomatic reconciliation with neighboring Armenia, and allowed the reopening and refurbishing of some Armenian churches in the southeast. It also took steps to return some previously expropriated Armenian properties.

Yet this month, the state expropriated St. Giragos in Diyarbakır, the largest Armenian church in the region. St. Giragos recently underwent a multi-million-dollar renovation, paid for primarily by contributions from members of the Armenian Diaspora and the pro-Kurdish city government. The expropriation was part of an eminent domain action, under which the Turkish government adopted legislation that gave it possession of 90 percent of the city’s historic Sur quarter.

The seizures are part of government plans to redevelop Sur, parts of which were devastated by recent fighting with the PKK. In a government video illustrating future plans for the area, numerous images of mosques are included, but no churches, even though the quarter contains seven churches. In addition to the expropriation of St. Giragos, two other churches with Armenian ties were taken over by the government, along with a Protestant and an Assyrian houses of worship.

Local civic activists fear that the government’s redevelopment plan will drastically alter the city’s flavor. “We are talking about a city where 33 civilizations existed. It means something to us and it means something else to the Turkish state,” said Merthan Anık, former head of the Diyarbakır chamber of architects. “When the prime minister came to Diyarbakır [on April 1] he made a speech emphasizing only the Ottoman and Seljuk architecture and culture.”

Muhammed Akar, head of Diyarbakır's branch of the ruling Justice and Development Party, downplayed such concerns. “This expropriation matter is misunderstood,” Akar said.

Much uncertainty remains concerning the plans for the Sur neighborhood. The official claim that the expropriation measure is being misinterpreted is not reassuring members of the local Armenian community. “We are not unfamiliar with this. We have anxiety, fear because we don't know” what will happen, said Gaffur Türkay, a board member of the Giragos Foundation, a non-profit group which works to maintain St. Giragos.

A bomb threat incident from Islamic State terrorists during the Easter holiday already had heightened the sense of vulnerability, commented political scientist Cengiz Aktar of Istanbul’s Süleyman Şah University. The threat turned out to be a hoax, but the Armenian community remains wary. “All in all, they [Turkish Armenians] are not as confident as a few years ago,” Aktar said.

As the government shifts to an increasingly nationalist narrative, that discomfort is not likely to dissipate soon.