Russia used the meeting in China to emphasize its importance in Central Asia. 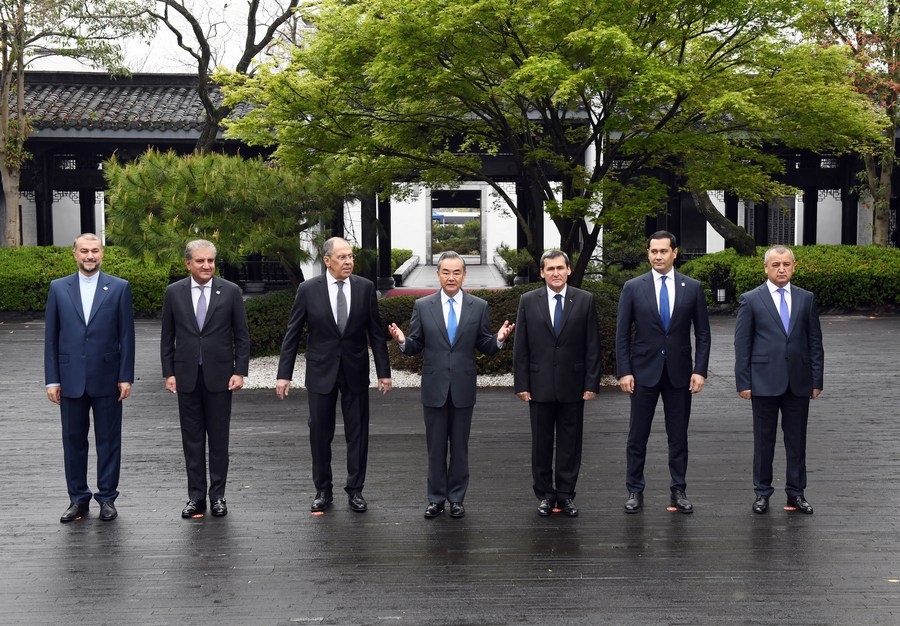 China led calls for the return of frozen assets to Afghanistan. (Chinese MFA)

Amid the war in Ukraine, it was inevitable that a meeting in China to discuss Afghanistan would become a platform for geopolitical posturing.

Russia used the talks with Afghanistan’s neighbors and regional powers to caution that it would not tolerate the presence of U.S. or NATO military infrastructure in Central Asia.

Russian Foreign Minister Sergey Lavrov also seized the opportunity to issue one of his regular alarmist warnings about extremist activity on the borders of Central Asia that he says could pose a threat to Russia.

His remarks were a pointed reminder that the Kremlin still considers Central Asia its backyard, as Moscow wages war on the other side of the former Soviet Union.

As Russia hijacked the proceedings to deliver broadsides against the USA and the West, Uzbekistan issued a heartfelt plea to stop Afghanistan from dropping off the international agenda as global attention remains riveted on Ukraine.

“In connection with known events in the world, we are unfortunately observing a certain decrease in the international community’s attention to Afghanistan,” Vladimir Norov, Uzbekistan’s deputy foreign minister said.

“The Afghan question has basically taken a back seat in world politics. This cannot be permitted.”

Norov was standing in for his boss at the meeting of foreign ministers from Afghanistan, China, Russia, Iran, Pakistan, Tajikistan, Turkmenistan and Uzbekistan in Tunxi. Uzbek Foreign Minister Abdulaziz Komilov is officially undergoing medical treatment abroad for an unspecified “chronic illness.”

Gossip-mongers have linked Komilov’s disappearance to a recent statement he made on Ukraine, although it is not ruled out that the 74-year-old minister is sick.

On March 17 Komilov overtly set out Uzbekistan’s position on the war for the first time, with an assertion that Tashkent is neutral and will not recognize the Russia-backed breakaway republics of Donetsk and Luhansk. That may have raised hackles in Moscow.

As Norov pleaded for the international community to “take responsibility for the present and future” of Afghanistan, Lavrov was busy blaming Russia’s Western enemies for the ills of both that country and Ukraine.

Following the “total failure of the experiment to impose alien recipes and values on the Afghan people, the ‘collective West’ bears direct responsibility for today’s humanitarian situation and the pitiful state of the Afghan economy,” he complained.

Likewise, “the main reason for the crisis in Ukraine is the policy pursued over several decades by NATO under the leadership of the USA.”

The West should therefore “bear the main financial burden for overcoming the crisis and stabilizing the situation” in Afghanistan.

China agreed that the U.S. and NATO should “assume the primary responsibility for the reconstruction and development of Afghanistan,” the Associated Press reported, quoting its Foreign Ministry.

The joint statement issued after the meeting “urged the countries mainly responsible for the current predicament in Afghanistan to earnestly fulfil commitments on the economic recovery and future development of Afghanistan.” It did not name them.

China led calls for the return of frozen assets to Afghanistan, the AP reported.

Uzbekistan has been pushing for sanctions relief since soon after the Taliban takeover. Tashkent recently joined forces with Pakistan to lobby for the lifting of sanctions.

Afghanistan is now at a “decisive stage,” Norov warned.

“Either this country will, with the assistance of the international community, create the pre-conditions to lay the foundations for a normal economy and development, or it will again become a refuge for terrorist and extremist organizations.”

Tashkent is to host the next ministerial meeting to discuss Afghanistan in the first quarter of 2023.