Down with Nagorno-Karabakh – long live Karabakh

What’s in a name? Azerbaijan’s decision to stop using the name “Nagorno-Karabakh” is the latest chapter in the long history of contested terminology in the region. Our weekly Post-War Report. 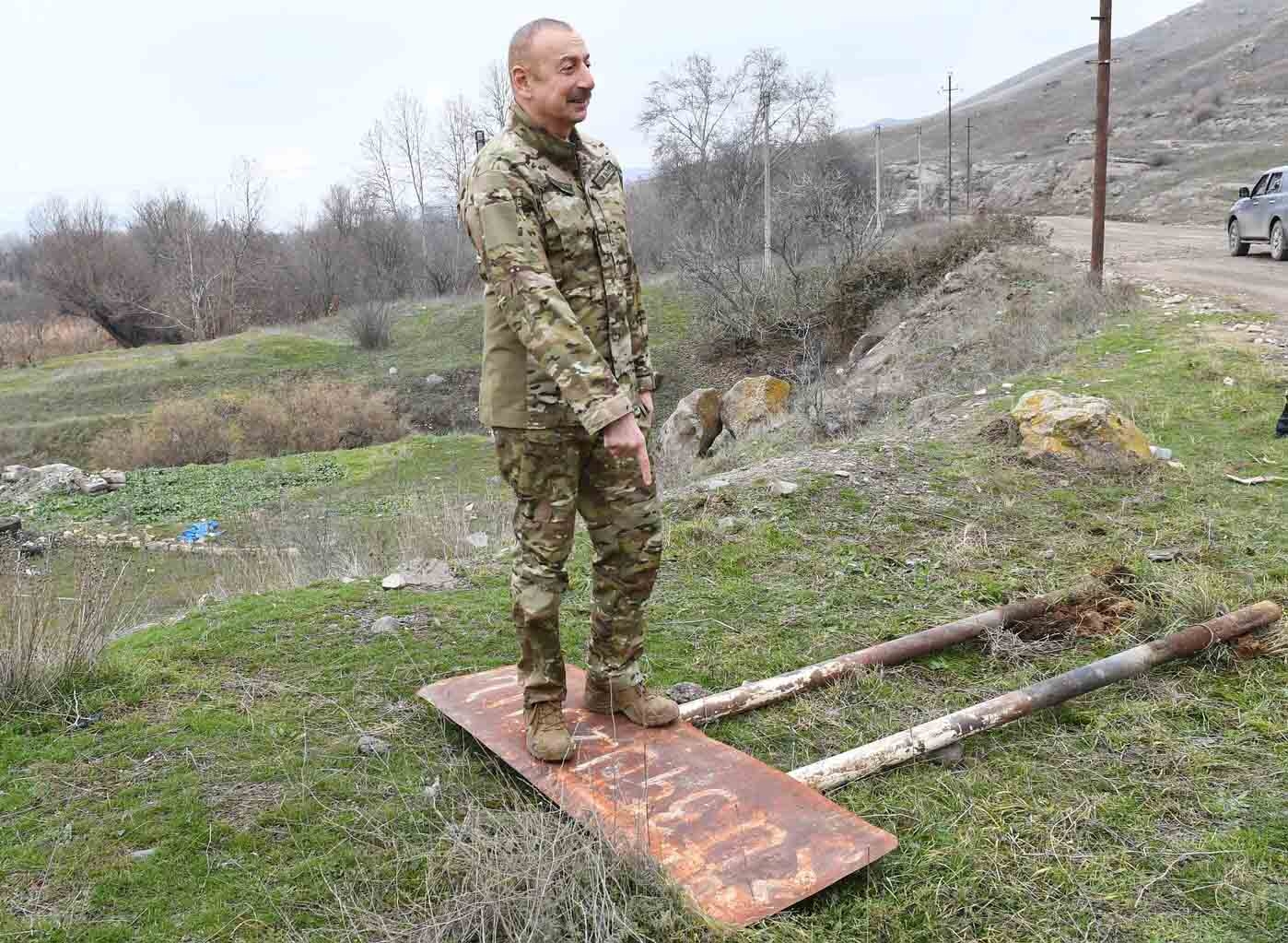 Last year’s war between Armenia and Azerbaijan not only changed the map, but also the dictionary. What was “occupied” became “liberated,” and vice versa. And Azerbaijan has introduced a subtle, but significant, shift in the way it refers to the lands it regained.

At a recent press conference, President Ilham Aliyev said that Azerbaijanis should drop the “Nagorno” (“mountainous”) in “Nagorno-Karabakh” and call the region simply “Karabakh”

“Nagorno-Karabakh is ancestral Azerbaijani land,” he said at a press conference. “As a matter of fact, we should not be using the words ‘Nagorno-Karabakh’ at all today. Karabakh with its flat and mountainous parts is an integral part of Azerbaijan. The Armenian people live in one part of it.”

Even before this announcement, Aliyev, other officials, and Azerbaijani media had begun more widely using the term “Karabakh” or “the Karabakh region.”

In a February trip to Lachin, for example, he declared: “We will turn Karabakh into a ‘green energy’ zone. We will turn this region, Karabakh, into a paradise.” On a visit to Gubadli in December, he said, “Today, as commander-in-chief, I am meeting with soldiers in these liberated lands. Specific steps have already been taken to restore this region, the Karabakh region.”

The term “Karabakh” used to describe a region is not new, but it was rarely used in a political context in Azerbaijan before the war. Then, it was much more common to use a narrower term, “Nagorno-Karabakh.” Translated literally from Russian, that means “Mountainous Karabakh” and gave its name to the Soviet entity, the Nagorno-Karabakh Autonomous Oblast (NKAO), which was the object of contention in the first war between the two sides in the 1990s.

“Karabakh,” without an adjective in front, refers to a broader geographical entity that also includes territory in the plains just to the east of Nagorno-Karabakh, called Lower Karabakh.

Generally, Armenians have preferred a focus on Nagorno-Karabakh, since the mountainous region was populated mostly by Armenians (but by Azerbaijanis as well), while it has suited Azerbaijanis to consider Karabakh as a whole, as very few Armenians traditionally lived in Lower Karabakh, making “Karabakh” a more Azerbaijani entity.

“The term Karabakh itself has attached inconsistently to highland and lowland spaces,” Laurence Broers wrote in his recent study of the conflict, Armenia and Azerbaijan: Anatomy of a Rivalry. “Whereas Azerbaijani geographies see both as indivisible components of a single, wider space encompassing the territory between the Aras and Kura rivers, Armenian geographies more often differentiate an Armenian-majority highland as a separate space.”

So, what’s at stake here in 2021? Aliyev laid it out in his press conference, in the sentence just before he declared that “Nagorno-Karabakh” should no longer be used: “Therefore, the issue of status should be completely removed from the agenda.”

Before the war, Aliyev and other officials regularly promised that, if Armenia would agree to return to Azerbaijan the territories taken during the first war, the Armenians of the region would enjoy “the highest possible autonomy” within Azerbaijan, offering examples like the culturally German Tyrol district of Italy and the culturally Swedish Aland Islands in Finland.

But once the war started, that promise was revoked. “We offered them autonomy … but they rejected everything,” he said during the war. Immediately after the fighting ended with Armenia’s capitulation, he memorably crowed: “To hell with the status, the status has gone to the grave, the status has disappeared, it is gone.”

And now, it seems, not only has the promise of an autonomous status for Nagorno-Karabakh disappeared, but so has the name itself. The name was “an artificial Soviet creation of 1923, a chimera of the Russian word ‘Nagorno—mountainous’ and the historical region of Karabakh,” said Farid Shafiyev, the head of an Azerbaijani government-affiliated think tank, Center of Analysis of International Relations. (The NKAO was established in 1923.) “After the Second Karabakh War, Nagorno-Karabakh as geographic term lost its relevancy,” Shafiyev told Eurasianet.

The cancelation of the name also dovetails with a broader Azerbaijani push to sideline the de facto government of the self-proclaimed “Nagorno-Karabakh Republic” since the end of the war. Azerbaijan has always considered this government to be illegitimate usurpers on its territory, but since the war Baku has more aggressively sought to isolate and sideline the government, which isn’t recognized by any country in the world, even Armenia.

Azerbaijan has lately complained more vociferously about visits by Armenian government officials to Nagorno-Karabakh, and is pushing to get Armenia to withdraw its military forces, appearing to put that withdrawal as a condition for returning the dozens of Armenian prisoners it still holds.

“There is now no territorial unit called Nagorno-Karabakh,” Aliyev said this week, at a video summit of leaders of Turkic-speaking countries. “Azerbaijan solved this issue with its historic victory.”

Of course, that’s not how Armenians see it. The de facto Nagorno-Karabakh Republic is still going strong, and in fact considers the parts of the old NKAO that are now controlled by Azerbaijanis to be “occupied.” (Though, interestingly, it doesn’t use that word to describe the non-NKAO territories that Azerbaijan also regained.)

On March 22, the 101st anniversary of the massacres of the Armenian population of Shusha/Shoushi at the hands of Turks and Azerbaijanis, the de facto government issued a statement using yet another name for the region: “The Armenians of Artsakh will never accept the loss of Shoushi. Shoushi was, is and will be an integral part of Artsakh, and everything will be done to liberate the occupied territories of the Republic and restore the historical justice.”

The Azerbaijani reimagination of this territory follows, in a way, the evolution of pre-war Armenian thinking on the same area. The territory under dispute, the lands that Armenia won during the first war, consisted of two different types of entities. One was the NKAO, the Armenian-majority territory inside the borders of Soviet Azerbaijan that the 1980s Karabakh Movement demanded be joined to Armenia. The other was the territory surrounding the NKAO that Armenians won during the course of the 1990s war, which were initially conceived as a security zone for the NKAO or as bargaining chips, to be given back in an eventual deal (most likely in exchange for recognition of Armenian control of NKAO). Those territories surrounding the NKAO became known as “liberated” to Armenians and “occupied” by Azerbaijanis.

But Broers’s book also traces how, over time, that distinction became blurred, with the help of another name: Artsakh. This ancient Armenian name for the territory evolved to encompass both NKAO and the surrounding territories, which were all reimagined as historic Armenian territory. (And today, the de facto government goes by both names: Artsakh and Nagorno-Karabakh.)

“Whether your preferred term is Karabakh or Artsakh, it has come and gone and it has moved around,” Broers wrote. “Neither term provides an all-encompassing frame for the region’s tumultuous history.”