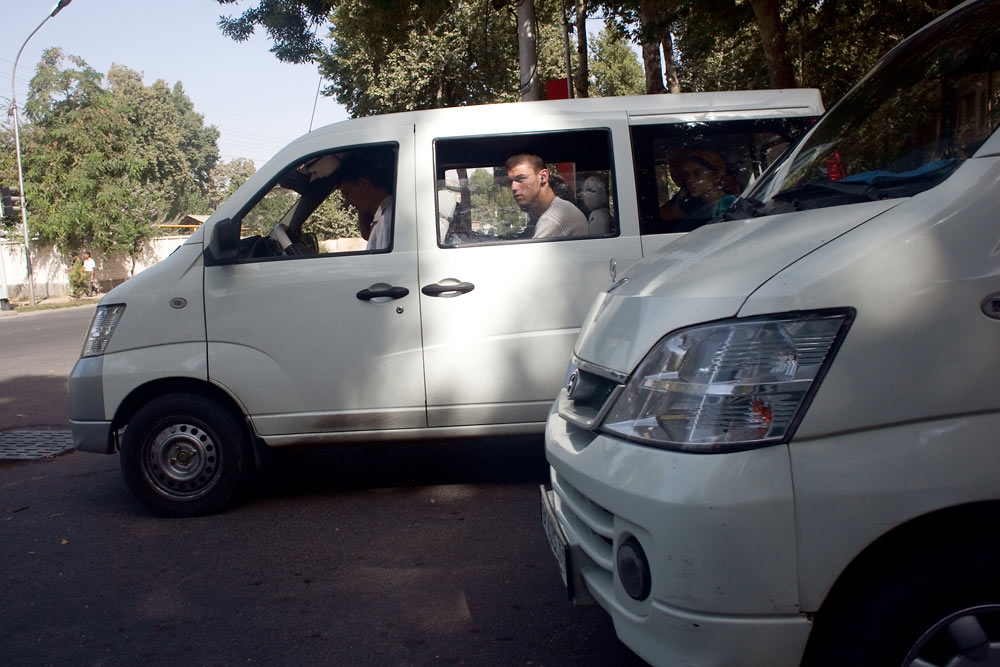 The Chinese-made minivans have been banned from use for commercial passenger transport in Dushanbe. (Photo: David Trilling)

Authorities in Tajikistan have banned drivers of eight-seat Chinese Hafei minivans from carrying passengers in the capital Dushanbe, putting out of work hundreds who used these relatively affordable vehicles to ferry residents around the Tajik capital. Disgruntled Dushanbe residents suspect that the move is connected to an effort by government-backed entrepreneurs to muscle in on a lucrative economic opportunity.

Authorities say the ban is motivated by passenger safety concerns, contending that the minivans are a source of frequent traffic accidents. But in tandem with the ban, Deputy Mayor Abdulhamid Sheraliev announced that more spacious, comfortable and safe Hyundai vans would replace the Chinese minivans, the Asia-Plus news agency reported in early April. The Hyundais are available for lease to drivers with commercial transport licenses. It is unclear if the approved Hyundais are available for purchase.

Observers suspect that powerful individuals have purchased a fleet of Hyundais and are trying to take over the lucrative taxi business in central Dushanbe.

When the Chinese minivans first appeared on the streets of Dushanbe around 2006, drivers and passengers affectionately dubbed them the Tangem, named after a female Korean soap opera star popular on local television. For many Dushanbe drivers, these diminutive vehicles became an important source of income.

The mass inflow of Tangems started when authorities prohibited larger microbuses from Dushanbe’s central thoroughfares several years ago. At the time, many observers hypothesized that traffic caused by the microbuses was disturbing President Imomali Rahmon’s commute to work. In response, inventive individuals started private taxi businesses along fixed routes, avoiding central streets. Many residents found the Tangem routes convenient and speedy. The small vehicles would fill up and move more quickly than the large trolleys run by city authorities. A driver could ply the routes having only a regular driver’s license.

These days Tangem drivers are livid. Many of them took out loans to buy the vehicles (a new Tangem costs approximately $6,000). Others leased them. For many, there is no easy way to find alternative jobs in Tajikistan’s tight labor market. Saidjon, a Tangem driver who spoke to EurasiaNet.org on condition that his full name not be printed, said that “many of the kicked-out drivers, including myself, will have to join the army of Tajik labor migrants in Russia or Kazakhstan.” [For background see EurasiaNet archive].

To enforce the ban, authorities have established steep fines for violators. Now, using a Tangem to transport passengers will carry a 700 Somoni ($160) fine. Some officials have even called for the penalty to be as high $500, according to an Asia-Plus report. The revenue generated from fines, the report added, would theoretically go toward construction of the Rogun hydropower plant. [For background see EurasiaNet archive].

To put the fines in perspective, a typical schoolteacher in Tajikistan earns between $30 and $40 per month.

Despite the prohibitive penalties, many Tangem drivers keep surreptitiously plying their routes, saying they have no choice. When approaching traffic police, they remove the sign indicating their availability – often piece of cardboard with a number drawn in felt marker – so not to be identified as commercial drivers.

One observer questioned the authorities’ motives for instituting such an “untimely and absurd” regulation when Tajikistan’s economy is gasping for air. [For background see EuasiaNet archive].
The move also has the tacit effect of stifling the entrepreneurial spirit in Tajikistan at a time when Dushanbe is wining international plaudits for innovation. For the first time, in 2009 Tajikistan was mentioned among the top 10 global reformers for legal reforms and an improved entrepreneurial environment in the World Bank’s Doing Business Report. “On the one hand, the country rectifies its image in the eyes of international donors and monetary agencies; on the other hand, the authorities deprive their own people of jobs,” the observer, an economist, told EurasiaNet.org on condition of anonymity. “These unjust actions create social strains in society.”

The traffic police have also introduced another seemingly arbitrary restriction. From now on, private taxi drivers can render their services to passengers only if their vehicles were manufactured after 2000. According to a business analyst speaking to EurasiaNet.org on condition of anonymity, two years ago a powerful businessman purchased 700 yellow Samand cabs from Iran. Very few of them have been leased and skeptics see this new legislation as a way to help powerful business interests.

Further burdening Tajik drivers, a new road north of the capital, constructed by Beijing for over $400 million, mostly in the form of a long-term loan, recently opened with unprecedentedly high tolls.

Previously, the road from Dushanbe to Khujand, Tajikistan’s second largest city, took more than eight hours to traverse; it now takes only four in good weather. But drivers say that given the astronomical tolls to use the new road, they’d rather take the old, potholed route. Depending on the type of the vehicle and tonnage, drivers must pay between US $0.05 and $0.40 per kilometer to use the new highway. Thus, at 345 kilometers, the tolls between Dushanbe and Khujand can cost up to US $138.

In the Varzob Valley, just to the north of Dushanbe, residents are protesting the new fees. The toll-collecting company makes no exceptions for those who live within the valley. In order to get to the hospital, for example, residents complain that the five-kilometer journey costs up to $1.50. “If there is not any alternative road, the introduction of a commercial one contradicts all international standards,” says an open letter to the president that has gathered 10,000 signatures, Asia-Plus reported on April 22. “Such actions can have a negative impact on Tajikistan’s economy.”

With the cost of living on the rise, some analysts are cautioning about parallels with the recent upheaval in Kyrgyzstan. “Upon the background of the tragic events in Kyrgyzstan, the Tajik authorities must consider the potential social strain, which may be caused by somebody’s desire to snatch control of everything,” the economist said.