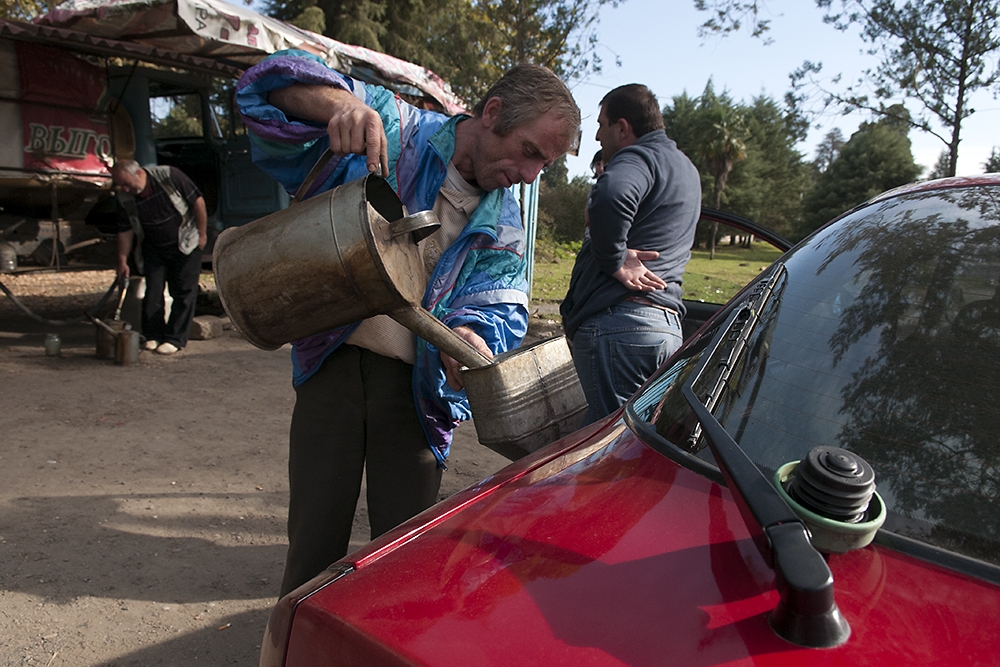 As the Russian economy tanks, some observers are starting to ask: is the Kremlin now too overstretched to continue supporting Georgia’s separatist entities? The answer so far apparently is no.

With six breakaway client entities now to finance – Abkhazia, Crimea, Donetsk, Luhansk, South Ossetia and Transnistria – the Kremlin’s financial commitments are adding up. But, so far, in the strategic South Caucasus, Moscow’s security interests are outweighing any economic pain that it is feeling.

And the Russian economy surely is reeling. Sanctions introduced by the European Union and United States over Russian aggression in Ukraine, and a retaliatory Russian ban on Western food imports, have caused food prices to skyrocket. A dramatic fall in energy revenue, along with the rapid devaluation of the ruble, is exacerbating the damage. Consumer prices rose 15 percent in January compared to the same period in 2014.

South Ossetia receives over 91 percent of its 7.3-billion-ruble ($111.4 million) budget from Russia. A 2013 study by the International Crisis Group estimated that Russia subsidizes some 70 percent of Abkhazia’s budget, proposed at over 11.75 billion rubles ($179.3 million) for 2015.

But, so far, there are no public indications that cuts are in the offing. “Yes, we have [economic] difficulties, but Russia still has lots of money,” underlined Alexei Mukhin, director of Moscow’s Center for Political Information, a risk-analysis organization. The “format of support” may change, but, “without a doubt,” it will continue to back Abkhazia and South Ossetia, he continued.

The economic problems that are gripping Russia are trickling down to Georgia’s ruble-based breakaways. Abkhaz media outlets, for example, report that food prices are up to 20 percent higher in the territory than in neighboring Russia; alternatives to Russian products are limited to goods imported from Turkey. To deal with increased inflation, Abkhazia’s de-facto National Bank expects to raise interest rates. One source of optimism is that hard times could prompt an increase in tourism for Abkhazia: more Russian visitors would be inclined to take relatively inexpensive vacations in the undeveloped Black Sea region.

South Ossetia, meanwhile, has no tourist industry to fall back on. It faces prices “bounding upward at a gallop,” according to local media, and no alternative to Russia for economic support.

In Tbilisi, which claims both breakaways as its own, Giorgi Volski, head of the governing Georgian Dream’s parliamentary faction, stressed that Georgian officials do not expect the Russians to scale back in Abkhazia and South Ossetia. Russia’s interest in “land with energy resources and transit corridors,” described in its 2009-2020 security strategy as “crucial,” will prevail over any cost burden, he believes.

“The Russian budget is geared to block the West from exploiting these resources and Georgia is one of these places of special interest. South Ossetia and Abkhazia [are] land for it to maintain its military presence in the South Caucasus,” Volski stated.

For all its outrage at Russia’s recognition of Abkhazia and South Ossetia as independent states, however, Georgia has not joined the list of Western countries imposing sanctions against Russia for its separatist activities in Ukraine. Rather, it is counting on the flailing Russian economy to allow it to pursue its own strategic plans with the West, and to avoid further conflict over the two breakaways.

“Our goal has been to not give Russia a pretext for any security escalation and to open up the Russian market to Georgian goods. And this happened to an extent,” said former Defense Minister Irakli Alasania, now a leader of the opposition.

After the Georgian Dream came to power in 2012 on a promise to “normalize” relations with Moscow following the two countries’ 2008 war, Georgia signed a European Union Association Agreement and agreed to establish a NATO training center. “The policy gave us the time and space to work solidly on these issues,” Alasania added.

But other events in Abkhazia and South Ossetia raise doubts about the policy’s success. Even as Moscow and Tbilisi were negotiating the return of Georgian wine to the Russian market in 2013, illegal Russian construction of a de-facto border for South Ossetia, patrolled by Russian soldiers, continued in Georgia.

In 2014, as Georgia saw its fruits and vegetables return to Russia after an eight-year embargo, Moscow signed a “strategic partnership” agreement with separatist Abkhazia that brought the Abkhaz military under Russian command in times of conflict. Russian President Vladimir Putin signed the agreement into law on February 4.

Tbilisi has condemned both the Abkhaz and the proposed South Ossetian integration agreements as steps toward Russian annexation of the territories.

To Svante Cornell, director of the Stockholm-based Institute for Security and Development Policy, Russia’s measures demonstrate how Tbilisi’s policy toward Moscow has failed. “The policy made the assumption that the main problem in the relationship was [former President Mikheil] Saakashvili’s policies, and that if Georgia changed its policy, Russia would reciprocate,” Cornell said. “The assumptions are wrong because the ‘prime mover’ in all this was Moscow’s policies aiming at reintegration of the former Soviet space under Russian control.”

Recent events in eastern Ukraine and Crimea suggest that aim has not changed, despite Russia’s economic woes.