Rights activists blasted the authorities' use of force. 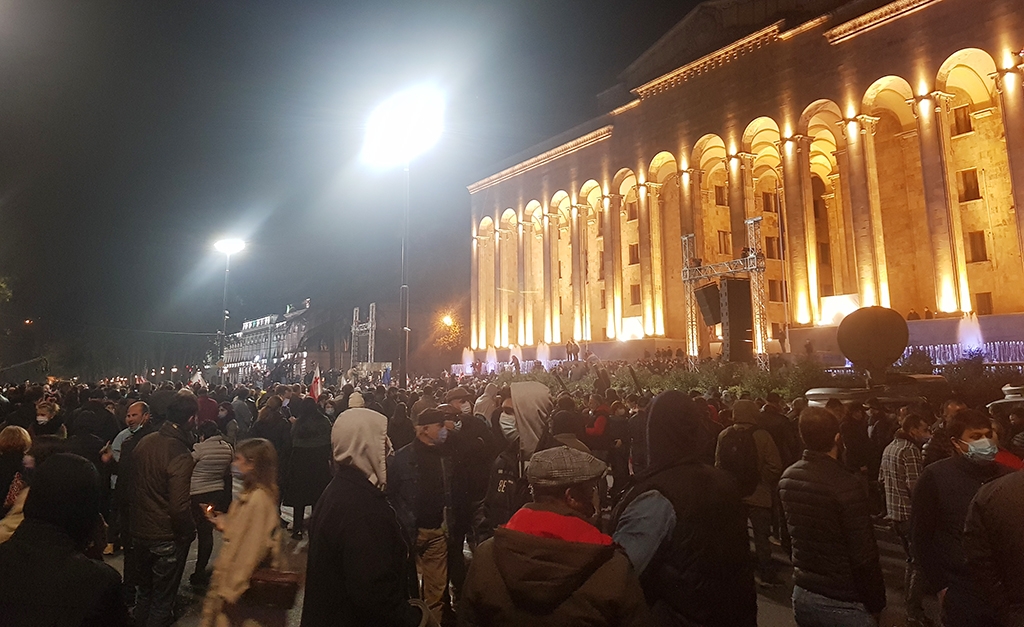 The ruling Georgian Dream party took more than 50 percent of seats in the October 31 parliamentary polls, enough to unilaterally form a government. But all other parties that passed the threshold to enter the legislature have refused to accept the results, accusing Georgian Dream of stealing the vote through bribery, intimidation and falsification.

International observers said that while they did detect a number of irregularities, including the use of administrative resources by Georgian Dream, they said the results were nevertheless generally free and competitive.

Outside the Central Election Commission headquarters on November 8 riot police fired pepper spray and water cannons, sweeping many protesters off their feet as temperatures plummeted to about 6 degrees Celsius (43 Fahrenheit). At least 19 people were arrested and several hospitalized.

Rights activists blasted the authorities for what they call excessive force. “The use of water cannons in cold temperature is tantamount to inhumane treatment, especially given that we saw its use on people who were not resorting to violence,” Ombudsman Nino Lomjaria told media from the sidelines of the clashes early on November 9.

Police defended the use of force, insisting that protesters were turning violent. “Participants of the rally pulled down a fence and threw stones and other objects and attempted to storm into the office of the Central Election Commission,” Interior Minister Kakhaber Sabanadze claimed at a press conference.

Led by opposition leaders, crowds gathered in front of the parliament building in the afternoon of November 8. Demonstrators later marched six miles across the city to rally in front of the election commission, where police had erected a makeshift metal wall. A Eurasianet correspondent saw police begin to shoot water at a small group outside the election authority before most protestors had arrived.

“What sort of urgent need was there to use force when on one side you had just a few dozen protestors and on the other was a far larger, well-equipped police force?” Giorgi Gogia of Human Rights Watch wrote on Facebook. “At that stage, we did not see any potential threat to the Central Election Commission that hundreds of police officers could not control without using force.”

Observers also noted that the first volley of water came without warning. “Protesters were not given a prior warning, as required by law,” said the ombudsman.

Prime Minister Giorgi Gakharia, who is recovering from COVID-19, has called for dialogue. “The process, which is being dragged into the streets, must move to political and legal platforms,” said Gakharia, speaking from self-isolation.

Opposition leaders insist that the subject of the dialogue should be snap parliamentary elections. “Everyone understands that negotiations are the only way out of this dead end, including negotiations on rerunning the elections,” said Salome Samadashvili, a member of the largest opposition party, the United National Movement, which is led by ex-President Mikheil Saakashvili.

International observers said that “fundamental freedoms” were respected in the October 31 vote. Transparency International Georgia and the International Society for Fair Elections, a local monitoring group, and opposition parties however have produced reams of suspicious or altered ballots and alleged cases of fraud. Election authorities and courts have thus far refused to address most of the irregularities.

The “parliamentary elections were a clear setback for Georgia and the worst elections held under the Georgian Dream government,” said in a joint statement by the country’s leading anti-corruption and human rights groups. “To preserve the stability of Georgia, it is important for politicians to resolve at the negotiating table the questions of recounting the ballots in the problematic precincts.”

The worsening pandemic is adding to tensions. Close to 3,000 new cases were diagnosed on November 9, the death toll jumped to 499 and the authorities reintroduced nightly curfews in larger cities.

Amiran Gamkrelidze, the director of the National Center for Disease Control, said that protests pose an epidemiological threat. “Of course such a large gathering will contribute to the growth of number of infections in our country and we will see this next week,” Gamkrelidze told local media, adding that he respects freedom of expression.

Protesters who gathered outside parliament on November 9 said they would defy the 10 p.m. curfew and spend the night in the streets.