Georgia is cautiously returning to normal life, but wondering if opening up will threaten its hard-won success in stemming the spread of coronavirus. 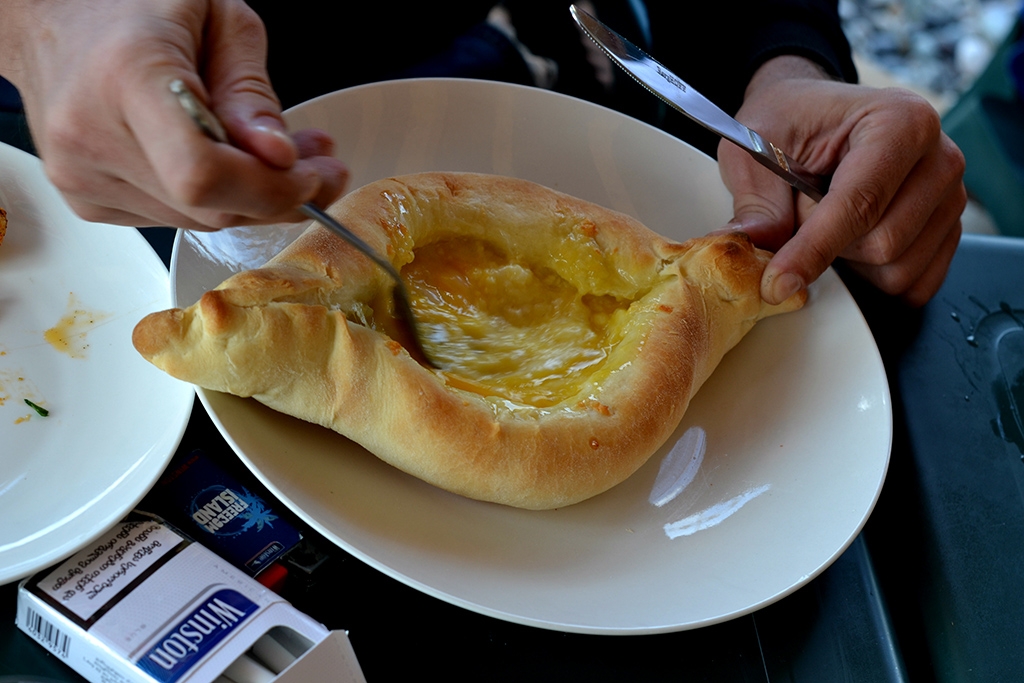 Back to normal: Tucking into some khachapuri acharuli (Giorgi Lomsadze)

The day that Georgia’s claustrophobic state of emergency expired, the jubilation that erupted in Tbilisi felt like New Year’s Eve all over again.

At the stroke of midnight, denizens of the capital city hit the streets, many with a bottle of alcohol in hand. Some drove around honking and yelling, others clapped from their windows and balconies. Occasional fireworks crackled through the night.

Skeptics rolled their eyes  – “It’s not like they invented a coronavirus vaccine,” one resident miffed on Facebook – but many still savored the return of small pleasures that had been banned for two months of a strictly enforced 9 pm-to-6 am curfew.

For the last few weeks, Georgia’s heavy lockdown – credited with making the country a rare international success story in combating COVID-19 – has been gradually dismantled.

Some shops were allowed to open May 8 and hairdressers on May 18. The nighttime curfew was lifted on May 23.

And on June 1 came what many food-and-drink-enthusiastic Georgians had been especially eagerly awaiting: the reopening of outdoor restaurants. Many could not wait to make their first reservation in months, allowing themselves to dream again of their favorite places and meals.

“I missed my old, normal life and going out to eat and meeting my friends at some of my favorite eateries was a big part of that life,” Maya Mateshvili, a media development specialist, told Eurasianet. “I’ve also missed specific cafes and restaurants I used to frequent, down to specific items on their menus.”

Like many other Tbilisi residents, Mateshvili went into a strict self-quarantine mode after coronavirus officially arrived in Georgia in February. She restricted her contacts beyond home to online interactions and had supplies delivered to her home, even as many used trips to the grocery store as their main excuse to leave home during the lockdown.

“We’ve tried international virtual happy hours, which was fun but of course it can’t replace the real thing, the in-person interaction,” Mateshvili said. “It was like Friends without Central Perk,” the famous coffeehouse in the sitcom series.

Many Tbilisians quickly returned to their favorite spots.

“The first night was very well attended, lots of regulars happy to be back,” said Cory Greenberg, an American resident of Tbilisi and proprietor of the self-described Dive Bar. “I think people are looking for a sense of community and want to gather with friends and experience a sense of normalcy, which for so many people in Tbilisi means socializing with alcohol,” he told Eurasianet.

“Khinkali never tasted so good,” said Levan Maisuradze, a programmer, who went out with friends on June 4 to get his fix of Georgia’s trademark dumplings. “I was a bit worried about being out with people – the coronavirus hasn’t gone anywhere – but the moment I took the first bite I forgot about everything,” he said with a laugh.

Going out for a drink to a bar felt strange, said Andrew Bennet, a Canadian based in Tbilisi, who hit Dive Bar on reopening night. “One of the main topics of conversation was to what degree the quieter atmosphere was the result of wariness of being in public or the psychological effect of spending months under an isolation regime,” Bennet told Eurasianet.

Georgia began to reopen as there was a growing sense that the economic cost of the lockdown began to outweigh its epidemiological benefit. The authorities, initially praised for their swift and firm response to the epidemic, have been facing growing criticism over the resulting layoffs, loss of income and rising prices. A meager assistance of 200 lari ($67) per month for the newly unemployed, combined with the red tape in distributing this and other assistance packages did little to ameliorate the economic hit Georgians took.

Restaurants and bars were among the hardest-hit businesses. “This crisis hit at a time when the restaurant business was booming,” said Meriko Gubeladze, who runs Shavi Lomi, a celebrated fusion restaurant. “Georgia was just becoming a major destination for food and Georgian food was gaining attention internationally.”

Gubeladze said that for the first week after reopening, attendance was about 80 percent lower than in the pre-pandemic era. “We can seat 250 people, but only the outdoor part is open, which can seat about 150 and even that is not fully booked. Last year this time we simply could not keep up with reservations,” she said. “There are no tourists, but most regulars are back and they are the bread and butter for restaurants,” she said, adding that she might need to further reduce her staff to keep the business afloat.

Restaurateurs and bar-owners have complained that their staffers have had trouble accessing the government’s unemployment aid. They say that government tax-relief programs – like property tax deferments and income tax breaks – are relatively insignificant compared to value-added taxes, which they still have to pay.

Bars and restaurants had to make some changes to comply with new regulations, but for Dive Bar it did not require much investment. “We moved tables outside, made sure they were far enough apart, and only put so many seats per table,” Greenberg said. “It’s pretty easy for us. We are a small, simple place and in summer everyone was outside anyway.” Well established places with loyal clientele should be able to weather the storm, he said, but new restaurants and places with limited or no outdoor space will have a hard time.

While many are happy to return to restaurants, both as workers and diners, there remain serious worries that the reopening could bring to naught all Georgia’s successes in keeping the virus at bay. Those worries will be heightened following the return of indoor drinking and dining, which is allowed starting June 8.

All of Georgia’s neighbors have seen continued rapid spread of the disease, while Georgia’s numbers have remained among the lowest in Europe: Georgia has had a total of 810 confirmed cases, with 683 recoveries and 13 deaths.

Mateshvili and her friends were counting the days until they could meet up on June 5 at Shavi Lomi, one of the city’s best-known restaurants, and ordering Gobi, its famed sharing platter. But before she made it to her first dinner outing with friends in months, Mateshvili had second thoughts. “I mean we are told to wear face masks, which I do, when we are at a café, but not when we eat, obviously, so are we supposed to eat in silence?” she asked.

Restaurant patrons are recommended, but not required, to wear masks at restaurants. “Of course you can use masks when eating and you will have to remove it […] but it is necessary to wear it when talking,” said Amiran Gamkrelidze, the head of Georgia’s National Center for Disease Control and Public Health.

Some have tried to abide by this request but then gave up, with masks being taken off in rough proportion to the amount of alcohol consumed. As a result, many are of two minds about restaurants reopening.

Mateshvili said she is not optimistic about people and businesses observing the appropriate health regulations. “I feel they are talking out of both sides of their mouths,” she said, referring to government officials. “I realize that we can’t stay locked up forever, but this way we may get the second wave sooner than we think.”