Erdogan To Putin: Let Us Into SCO! 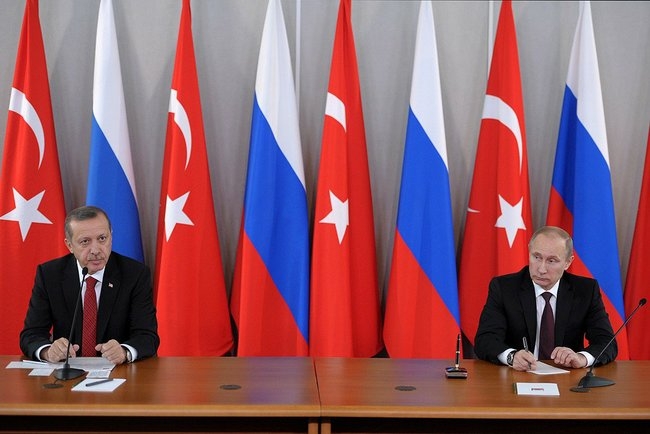 Turkish Prime Minister Recep Tayyip Erdogan, visiting St. Petersburg, repeated his request for Turkey to be allowed in to the Shanghai Cooperation Organization to "save us from the trouble" of trying to get into the European Union. And at the same time, he seemed to endorse Turkey's entrance into the Russian-led Eurasian Union. Turkey became a "dialogue partner" of the SCO earlier this year, but that distinction apparently doesn't mean much: Turkey wasn't even invited to the September summit in Bishkek. In spite of that shabby treatment, Erdogan still holds hope for the SCO, it seems. In St. Petersburg, at a joint press conference with Putin, a reporter asked a double-barreled question: to Putin about Ukraine's move to halt its EU accession, and to Erdogan about Turkey's interest in the Eurasian Union. Putin ended his comments on Ukraine by noting that "Turkey has a lot of experience of negotiating with the European Union. We will ask the Prime Minister’s advice on what line to take in this situation." And then Erdogan brought up the SCO. From the Kremlin's official transcript:

RECEP TAYYIP ERDOGAN: Yes indeed, we have 50 years’ experience. That counts for something (laughter). In response to Mr Putin’s statements, let me make another proposal: accept Turkey into the Shanghai Cooperation Organisation. VLADIMIR PUTIN: I think or rather I know for a fact that Turkey’s international influence and the independent and sovereign policy that Turkey follows under your leadership give every reason to have Turkey play a more active part in regional international organisations. Russia welcomes this. RECEP TAYYIP ERDOGAN: And we also support the idea of concluding a free trade agreement with the Eurasian countries. As for the Shanghai Cooperation Organisation, I have raised this question before at talks with Mr Putin, and I say again now that this is something we want.

According to media who were there, Erdogan's statement was slightly different, and included an intriguing line that the official transcript missed: “You are right. Fifty years of experience is not easy. Allow us into the Shanghai Cooperation Organization and save us from this trouble.” It's hard to know what Erdogan means by this. In this case, the SCO (and the yet-to-exist Eurasian Union) benefit from their lack of accomplishments, as it allows people to project whatever virtues they want on to the organization. The SCO, thus, has become a sort of rallying point for people who believe that the western-dominated world order has run its course -- or at least shouldn't have the only say in how the world is run -- and who are looking for alternatives. Last time Erdogan mentioned the SCO it occasioned a long period of speculation over the future Turkey's geopolitical orientation. And that is probably what Erdogan intended by this statement, as well. NOTE: A previous version of this post mistakenly said the two presidents met in Moscow, rather than St. Petersburg.